As mentioned on the first page of this review, the keyboard dock section of the Toshiba Z10T-A-106 is only a few millimetres thick. It’s also a small area for all of the keys, meaning there’s no room for a numberpad and the keys themselves are on the small side. There’s actually some generous spacing between the letters, but we’d have sacrificed this to make some of the non-letter keys bigger: in particular, the Tab and Capslock keys are tiny, which means initially we found ourselves missing the Q, A and Z keys. Nothing that practice won’t solve, of course, but it led to a lot of extra proofreading on this review.

In other ways it’s a good keyboard: it’s backlit, which is a bonus for low-light conditions., and the size of it means that it’ll be easy to chuck in your bag if you want to take the tablet alone, but might need to type more than expected.

It’s possibly an issue with our review model, but we did find the keyboard dock lost contact with the tablet from time to time, requiring a reconnection. Not a big deal, but frustrating on the couple of times it occurred in our time with it. 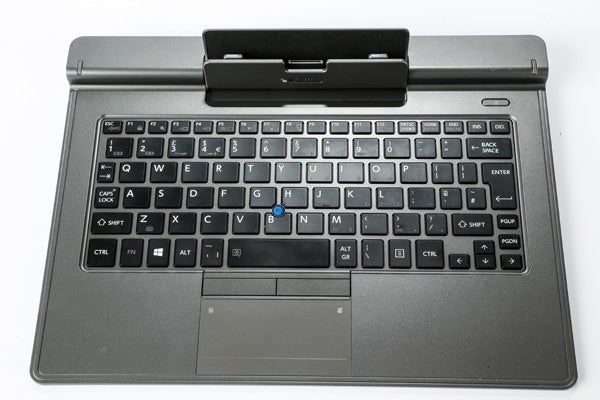 The Toshiba Z10T-A-106 is in a select group of laptops that actually offer three ways of navigating Windows 8’s menus: like the Lenovo X1 Thinkpad Carbon Touch, it offers touchscreen, touchpad and a mouse ‘nub’ nestled between the G, H and B keys. It’s a nice extra to have, giving very accurate cursor movements, although it’s a bit slower to use than the touchpad.

The touchpad is pretty small – it would be hard for it to be anything but, given the size of the device overall. It would be a little taller, but there are two mouse buttons above it. Presumably this is so you can use the mouse nub without stretching too far to click, but we found ourselves instinctively going underneath it, rather than above. The buttons are a little fiddly to use, though you can tap the touchpad to click as well.

Other than the size limitations, it’s a decent touchpad. Smooth and responsive, gestures are consistent to manage, and you do end up missing it when using the Z10T-A-106 in tablet mode. 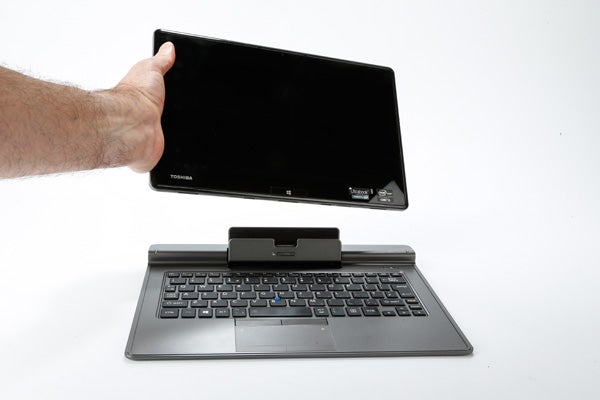 The Toshiba Z10T-A-106’s unique selling point is that it doubles up as both a laptop and a tablet, so it would be remiss to go the review without assessing its tablet qualities. We’ve already praised the screen, though outdoors it was a little reflective – with the current weather, we were unable to get full sunlight on it, but imagine it would be that bit bit harder to see it.

With Windows 8’s tablet function it works well. The widescreen dimensions do mean that web pages appear very long and thin in portrait mode, but it’s not a big deal. There’s also a lock on the side to prevent the view unexpectedly changing from landscape to tablet at the slightest tilt.

In short, as a tablet it works well, though of course Windows 8 lacks the applications of the iPad or of the myriad Android tablets now available on the market, so if you’re mainly in the market for a tablet, it’s worth keeping that in mind. 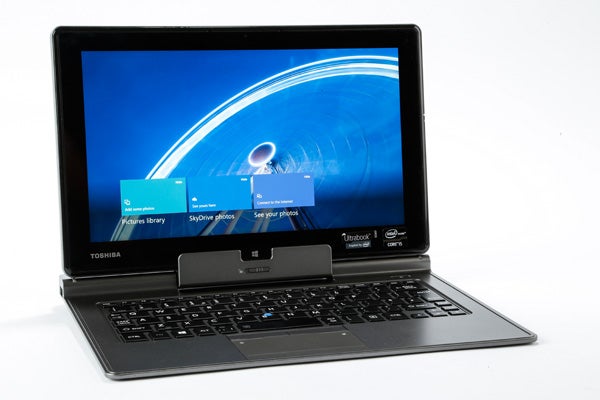 Windows hybrids are tricky because they effectively compete against straight tablets and Ultrabooks. The original Surface Pro shows this, but the Surface Pro 2 remedied its biggest problems to create a product worth recommending. Unfortunately, the Toshiba falls a little short here. The design isn’t as refined and the battery life isn’t long enough. Given they’re about the same price, the Toshiba doesn’t come out of the comparison well.

Moreover, if you’re leaning toward a laptop more than laptop, the Lenovo Yoga 11S or the Sony VAIO Duo both offer a superior semi-hybird experience. They’re a little more expensive, but it’s money well spent in comparison to the Toshiba.

The Toshiba Z10T is good value, but it falls short of the best alternatives due to its average battery life and basic design. It has some plus points, but the overall package isn’t that exciting.