There are a number of choices out there for those that can’t decide whether they want a tablet or a laptop. Some of these, like the Lenovo Yoga 11S, have a reversible keyboard, some have a kickstand and keyaboard cover like the Surface Pro 2, while others come with a keyboard dock. The Toshiba Z10T-A-106 fits into the latter category. A Windows 8 hybrid crossing an Ultrabook with a tablet, the Z10T-A-106 is aimed at those who want a super portable device, but still need the word processing powers of a laptop – students or mobile workers perhaps. But is it worth the £750 pricetag? 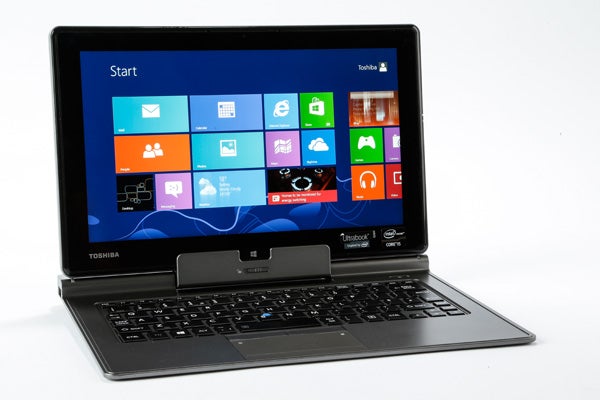 Unlike a standard laptop, the removable tablet design means that the processing power has to come from the screen area. This means that the Z10T-A-106 is quite top-heavy in its design, with an incredibly thin bottom keyboard section: basically the inverse of a regular laptop.

The docking area makes a thin design a little more chunky and angular than the current fashion in Ultrabooks, but elsewhere it emulates the sleek minimalism. It sports a dark grey design all around, with a textured area behind the screen (which has to be held on its own, of course) and a smooth metal design on the base and keyboard.

Opening it up presents a smallish keyboard, an even smaller touchpad and two mouse buttons unusually placed above it. There’s also a mouse ‘nub’ in the middle of the keyboard, to complement the touch screen controls that are essential in a tablet. The flexible dock section has a lock button on it to secure the screen when in laptop mode, and it won’t ever come loose without a deliberate effort on the user’s part.

The dock is only a few millimetres thick except for an inch high area at the back which allows for some extra connectivity.

On that subject, the Z10T-A-106 manages to pack quite a lot of ports, jacks and buttons onto its small frame. On the tablet itself, there’s the power switch, a volume rocker, a combined microphone and headphone jack, a USB port, a mini HDMI port, an SD card slot and the AC adapter port. On the keyboard dock, there’s another USB port, another AC adapter port a full-size HDMI port, a VGA port and an Ethernet jack.

Overall the design is reasonable, but the build quality of the keyboard dock is only so-so and its lacks the elegance and style of the Surface Pro 2 or the Yoga 11S. 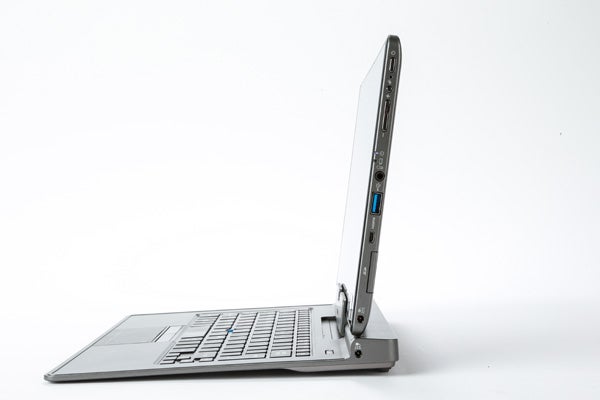 The touchscreen tablet part of the Z10T-A-106 has a good screen on it, as the extra portability generally requires. At only 11.6-inches, it’s on the smaller end of laptop screens, but on the larger end for tablets: still, with a 1,920 x 1,080 resolution, icons and text have a wonderful crispness to them. The brightness is decent, and the viewing angles are good – although the screen is a little bit reflective for us. The colour accuracy is pretty good though – if we had to be ultra picky, we’d say it’s closer to being more washed out than too vibrant.

Of course, as a hybrid, its touchscreen credentials are all important, and we have to say that touch is responsive, accurate and smooth. The high-resolution means that in desktop mode things get a bit more fiddly, but that’s a criticism of the operating system rather than the screen itself, which can’t be faulted.

In fact, we only have one big issue with the screen, and that’s down to its hybrid nature: when in the keyboard dock, the screen won’t lean back much further than 45 degrees, presumably because the top-heavy nature means it would topple over. This means that when working, you really need a desk to stand it on. Ironically, it’s very hard to use this laptop on your lap.