Apart from its amazing speakers, the last Toshiba notebook we looked at – the Toshiba Satellite A300-177 – was a fairly standard budget affair. However, entering the upper-class light notebook fray on Toshiba’s behalf we have the brand new Portégé M800-106, a fairly stylish 13.3 incher with some decent specifications.


In terms of looks, the M800 has undergone a bit of an overhaul from the A300-177. Though it does maintain a similar overall look, including the pin-stripe motif, it’s far more coherent. That is to say, in everything but colour: unusually, the entire top including the lid and keyboard’s bezel is white, while the base of the machine, where the ports are located, is matte black. Personal preferences for black aside, it might have been nice of Toshiba had it made the whole thing a single colour, or at least gone for grey over black. 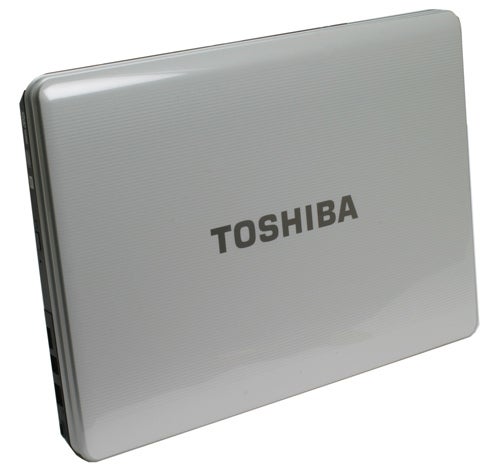 Still, if you like white with grey stripes there’s little to complain about. The pattern on the lid is quite subtle, and though this doesn’t apply to the Toshiba logo, at least it’s handsomely depicted in faux-chrome. There’s also a slim silver trim at the lid’s outer edges, which combines with the lid’s shape to good effect.


Opening the machine up, the look is a bit messier, with four colourful stickers being particularly distracting. Once these are peeled off though, things start looking up. Unlike with the Toshiba Satellite A300-177, the touchpad is perfectly integrated with the stripes motif, with only a white LED bar and a change of texture indicating where the touchpad begins and ends. 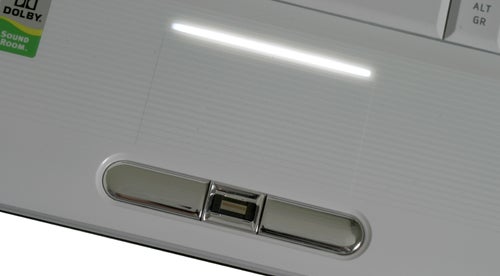 While on the topic of the touchpad, it features two buttons visually identical to the ones on the A300, though this time round there is a fingerprint reader nestled in between. Also, their metallic finish is matched by both the logo on the lid and the webcam housing at the top of the screen’s bezel – all of which looks quite neat and tidy. Shame, then, that this good early impression is tainted by speaker grills resembling toy ones thrown in without any thought to integration. 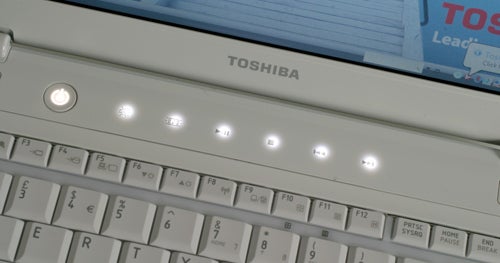 Things do improve, though, with a set of nicely backlit touch-sensitive media controls above the keyboard that are indicated by small grey icons and whose lighting can be turned on or off at the touch of a button. This also controls the aforementioned illuminated touchpad bar, the power button and the Portégé logo on the left palm-rest.


It has to be said that white LED lighting against a white background really works a treat in the visual department. This also makes the M800 perfectly usable in the dark. When pressing a media key, rather than an annoying beep, they briefly light up if dark, or dim for a second if lit. It also helps that they’re very responsive, lending some credence to their “feather-touch” name.

Regrettably, the keyboard is less inspiring. Layout is okay, with proper key placement and a full-sized Enter key. Toshiba has even managed to squeeze in dedicated Page Up and Down keys, but unlike the Dell XPS M1330, the End key is difficult to hit accurately, jammed in between Home and Insert.


And though tactile feedback is acceptable, there is a large amount of flex. This aside, keys have a decent amount of travel, but they still lack the assured ‘click’ better notebook keyboards provide. It’s by no means an unpleasant typing experience, but it just doesn’t feel as good as a majority of the competition. 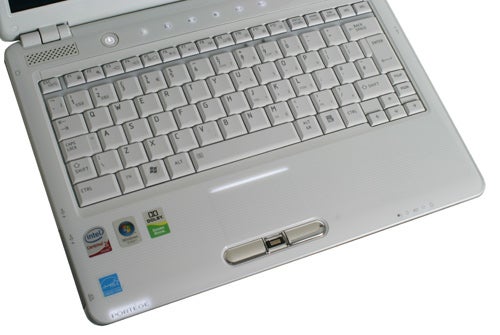 There are no such problems with the touchpad. Its chromed buttons are a tad slippery, but easy to hit and the touchpad as a whole is nicely proportioned. It’s worth noting, though, that the only major source of heat that can be felt on the notebook’s surface is directly below this touchpad, meaning your fingers will usually touch a warm surface. It’s a bit disconcerting; though it might be nice in cold weather!


Toshiba continues its rather useful habit of marking ports with logical icons along the top, meaning you can plug things in without needing to look at the sides. Oddly enough, in addition to the modem jack that ever fewer users will care about, the major omission is the HDMI port, which is not marked at all.

Still, the M800 offers pretty much every form of connectivity you could want or need. The back only has a power jack, while on the left we find VGA, the aforementioned HDMI, a combined e-SATA and USB 2.0 port, a normal USB one, FireWire and audio in/out where the headphone socket doubles as S/PDIF. There’s also a 34mm ExpressCard slot, from which it’s a tad difficult to remove the plastic placeholder.


On the right, there are Ethernet and modem jacks, a another USB port and the DVD-writer. The front is kept fairly clean, featuring the wireless switch (with its own tiny red LED) and a memory card reader capable of reading SD, SDHC, MMC, Memory Stick, Memory Stick Pro and xD Card. Last but not least is another well-loved Toshiba hallmark, the volume wheel, which is still by far the most intuitive way to adjust noise levels – to my mind at least.

And that’s a good thing too, since you’re more likely to be using the volume than on most other notebooks. Like Toshiba’s excellent efforts on the Toshiba Satellite A300-177, the speakers on this notebook sound pretty amazing for their size. In fact, they confidently match and best those found on larger machines from some manufacturers.


At their maximum volume, where you can hear pretty much everything, there is hardly any distortion and Dolby Sound Room does a pretty good job of lending sound an extra dimension of depth. Moreover, plug in some headphones and you benefit from Dolby’s excellent virtual headphone technology.


Unfortunately, the 13.3in TruBrite screen just doesn’t match up to the brilliant audio performance. Though it’s bright and vibrant, viewing angles are very poor, with strong contrast shift at even slight angles. And though there is no sign of backlight bleed or banding, blacks are deep only at the cost of significant amounts of dark detail.

As an entertainment experience, the M800 thus pairs above-average audio with a below-par screen, and we can’t help wishing it was the other way around. After all, a lot of the time you’re likely to use headphones anyway, but the screen is pretty much a given – unless you’re hooked up to a TV via HDMI, in which case you’ll likely use the TV’s audio too.

The guts of the machine certainly don’t disappoint, though. An Intel Core 2 Duo running at 2.26GHz in a thrifty 25W thermal envelope powers through anything you can throw at it, and is backed up by 4GBs of RAM, which is more than the 32-bit Vista Premium needs. Storage too is more than adequately handled by a large 5400RPM, 320GB drive and the goodness continues with Draft-N Wi-Fi and Bluetooth 2.0, while a 1.3 megapixel webcam completes its communications credentials. Just don’t expect to run any demanding games, since graphics come courtesy of an integrated Intel X4500.


Moving onto software, Toshiba do pre-install an overwhelming amount of it. But while for some this will just be bloatware, most of the utilities do at least have a useful function and will come in handy for computer novices.


Its the battery life, or the lack thereof, that really lets the M800 down, though. Its standard battery is a pathetic three-cell 3700mAh affair, which lasted only two hours in the Productivity test and an hour and half in the high intensity DVD test. So, though you might not have too much trouble with some DVDs at reasonable brightness, movies of two hours or more are going to be a real problem and you won’t have much left afterwards, either. 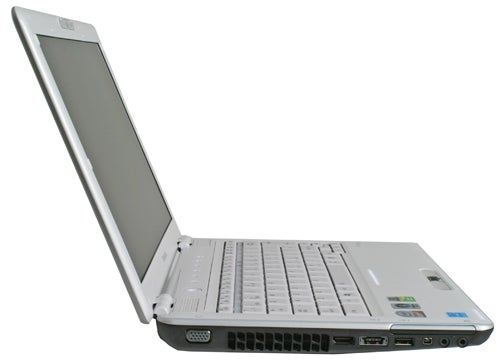 To remedy this, you could get a nine-cell, 7,200mAh battery (part number PA3636U-1BRL) for around £100, or a six-cell 4,800mAh for £85. Yet, it’s annoying and perplexing to have to purchase extra hardware just to get decent overall performance, especially when the likes of the 12.1 Samsung Q210 manages more than double the battery life straight out of the box.


Indeed, in terms of competition, Samsung’s Q210 is probably one of the more interesting rivals, coming with a more portable, better 12.1in screen; a discrete graphics card; parity on other features (except for e-SATA) and the Centrino 2 platform for around the same price. Samsung also has a similar 13.3in model, the Q310, that competes in the same price range as the M800. 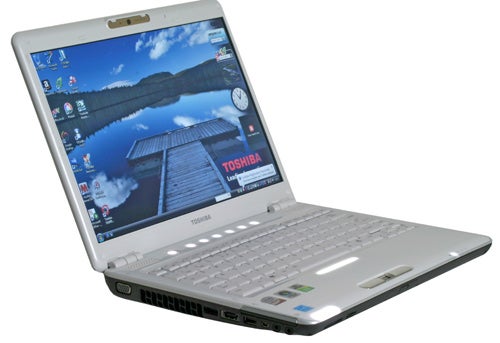 If getting the extra inch-and-a-bit of screen is important to you, the Dell XPS M1330 is also worth a look. Going for similar specifications and nine-cell batteries in both cases will set you back around £770. For this outlay the Dell might lack Centrino 2 and e-SATA, and obviously its speakers are not as good, but you do get superior styling, build quality, graphics and a media remote, in addition to Dell’s famous customisation. Moreover, with the standard six-cell battery you will get more longevity from it than the M800 without gaining any weight in comparison. And, if you’re not to fussed about styling, the Dell Vostro 1310 offers excellent value and far superior battery life as well.


With the Portégé M800-106, Toshiba delivers a 13.3in notebook that’s attractive enough, eminently portable and stuffed with features. It also continues Toshiba’s reputation for excellent notebook speakers. However, it’s let down by an average screen and incredibly poor battery life, meaning that if you want to use it on the move you’ll have to spend close to £100 more to get the desired performance. This, ultimately, makes the M800 disappointing value for money despite its other potential strengths, so Toshiba should be kicking itself for its penny-pinching since it makes an otherwise good notebook rather ordinary.