Glancing at its spec-sheet, Toshiba’s Portégé A600-14C reads like any mobile business user’s dream: a 12.1in laptop with integrated 3G/HSDPA that weighs less than a kilo and a half, all without breaking the bank. We’re still rather impressed following Toshiba’s awesome NB200-10Z netbook, so let’s see if the A600-14C can uphold the imposing pedigree.


One thing you might notice about the A600-14C is that, despite its light weight, at 29.9mm it is rather thick – especially when compared to the svelte Toshiba Portégé R600. It’s still a fairly nice-looking machine for its sector, but if you want a stylish 12.1in business laptop you’re better off with the (admittedly more expensive) Dell Latitude E4200. 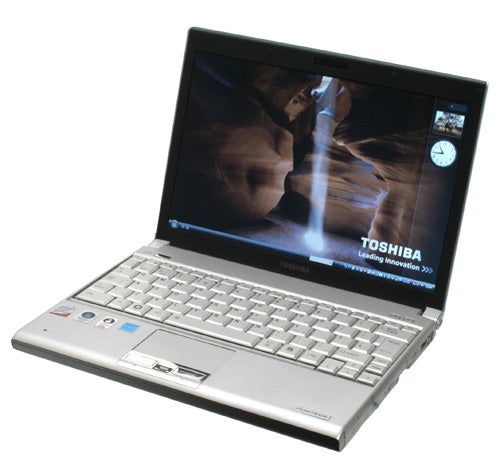 When closed, the A600 shows off the chromed and indented Toshiba logo on its lid, which complements the machine’s overall semi-matte silver finish rather well. Thanks to its LED-backlit screen, the lid is very thin at less than half a centimetre. It is also slightly smaller than the laptop’s base so that the backlit icons in the palm-rest are visible on the protruding base with the laptop closed.


Opening the lid, most will be pleased to hear the screen is surrounded by a matte black bezel, though there’s a small glossy section for the webcam. Aside from a couple of chromed touches for the power button and around the touchpad , though, the A600 is substance over style, so you needn’t worry about tiresome fingerprints or scratch-prone glossy plastics. 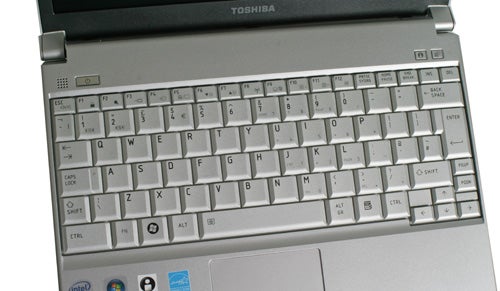 Build quality is also generally impressive, with the flimsy-seeming light plastic holding up well under pressure without a hint of creak or more flex than is healthy. Unfortunately the optical drive area is an exception: even light pressure at the laptop’s bottom here displays an alarming amount of give, leaving the drive bay cover vulnerable to snapping off in a fall, while pressing down at the top results in noticeable flex.


While not quite up to the excellent effort found on HP’s Compaq 2230s, the spill-proof keyboard on the Portégé A600-14C is first-rate. Layout is as good as space allows, with a proper UK-style Enter key and large Ctrl-key to the outside of the Fn key. Feedback is decent despite the slightly shallow travel and keys have a nice positive click.

Sporting a subtle textured surface, the touchpad is large and comfortable. Its buttons might feature a chromed (i.e. slippery) finish, but their shape and placement makes them easy enough to use despite being a tad on the small side. However, this is the one high-maintenance area of the Portégé A600-14C, since the chrome buttons and their surround love fingerprints almost as much as we love technology – not the smartest design-choice on Toshiba’s part.


Between the pad’s buttons is nestled a fingerprint scanner, a feature found on most business and even many consumer laptops, though we’d recommend using it in conjunction with – rather than instead of – a password.

Connectivity on the A600-14C is a slight step above what we’re used to from a portable business machine at this price point. While the lack of HDMI or any other form of digital video connection is expected, the presence of a combined eSATA/USB port is genuinely useful for faster data transfer speeds to external storage.


Looking around the machine, along the left we find a VGA port, power input, second USB port and 3.5mm audio connections, as well as Toshiba’s signature volume scroll wheel. There are no connections at the front or rear, but on the right are housed a 54mm ExpressCard slot, an SD card reader, the Portégé’s DVD-Re-writer drive, a third USB port and a Gigabit Ethernet socket. There’s no modem, but then the integrated HSDPA is the first line of defence where Wi-Fi isn’t available.

To help you control all the different wireless radios on the A600 there’s a dedicated switch. This is situated on the right side, which makes it more difficult to reach than it need have been, but regular use will quickly alleviate this.


Like most business laptops, the A600’s speakers are exceptionally weak. Not only do they lack volume, but an utter absence of bass combined with a shallow soundstage mean you really don’t want to use these beyond the occasional YouTube video. Of course on a business machine good speakers really aren’t that important, but it’s worth keeping in mind if you need speakers for doing presentations.

Screen performance is also assessed slightly differently for a non-consumer laptop: poor viewing angles, for example, may actually be an advantage to help maintain privacy. Not that that’s especially the case here, for despite woeful vertical viewing angles, the Toshiba’s horizontal ones aren’t bad.


Nor does the rest of the A600’s12.1in 1,280 x 800 screen disappoint, with no sign of backlight bleed and minimal banding, fairly bright colours, sharp text and even okay greyscale performance. It’s nothing special, but certainly adequate for both business and multimedia needs and its matte coating prevents glare or distracting reflections. 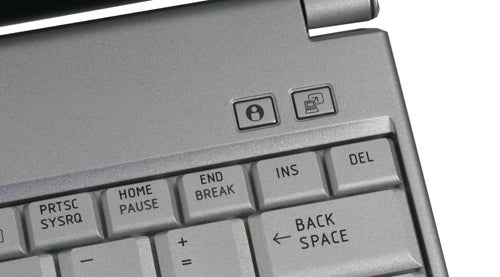 Getting to the internals of this light little machine, the cast is led by an Intel Core 2 Duo U9300 – as found in the stylish Samsung X360. This ultra-low voltage processor runs at 1.2GHz, which is even slower than an Atom. However, thanks to its superior architecture, faster front-side bus and larger cache its performance far outstrips even the fastest Atoms, all while maintaining a thrifty 10W TDP.


It offers more than enough power for general multi-tasking but struggles with CPU intensive activities like 1080p video, though videos with lower bit-rates/resolutions or more efficient codecs do fare better. Gaming is of course out of the question thanks to the integrated Intel GMA 4500H graphics chipset, which is frugal but feeble.

Joining the ultra-low voltage CPU and integrated graphics is 3GB of RAM, which is all the installed 32-bit version of Windows Vista Business can realistically cope with anyway. While on the topic of the OS, a ‘downgrade’ to Windows XP Professional is available through Toshiba’s Recovery DVD included with the laptop, which will doubtless be a big bonus for some. 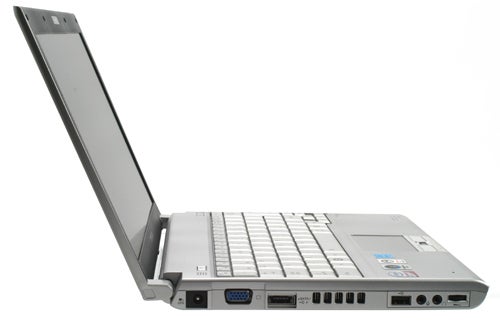 Another unexpected but welcome touch is the Portégé’s speedy and generous 7,200rpm 320GB hard drive, which has a positive impact on performance compared to the slower 5,400rpm drives found on most notebooks. Not only that, but as a part of Toshiba’s EasyGuard business program this disk is protected by a 3D sensor that freezes the drive heads if it detects a fall. While we’re on business features, TPM (Trusted Platform Module) 1.2 is also part of the package, as is Intel’s vPro remote management technology.


Toshiba’s work-oriented laptop is equally well-specified on the wireless front, with Draft N Wi-Fi, Bluetooth 2.1 plus EDR and of course mobile broadband (otherwise known as 3G or HSDPA), which currently goes up to a theoretical speed of about 7.2Mbps in the UK. As usual, the sim-slot for 3G is found behind the battery, and in this case it has its own little lock switch to hold the card in securely when the battery is removed. 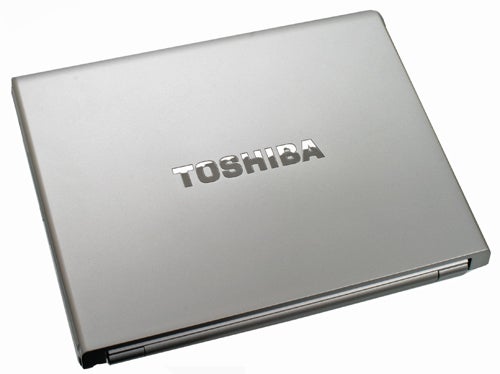 Speaking of the battery, it has a 5,800mAh capacity, and as you might expect from a system based on an ultra-low voltage processor the A600’s battery life is excellent. Though not quite up to the seven and a half hour maximum claimed by Toshiba, in MobileMark 2007’s Reader test the laptop managed over five and a half hours with the display set to 40 per cent brightness and all wireless connections turned off. Though the screen is too dark for comfort with brightness set to minimum, at around 20 per cent it’s mostly usable, so with frugal use you could eke out even more. Combined with a weight of 1.46kg, the A600-14C is a very portable machine. 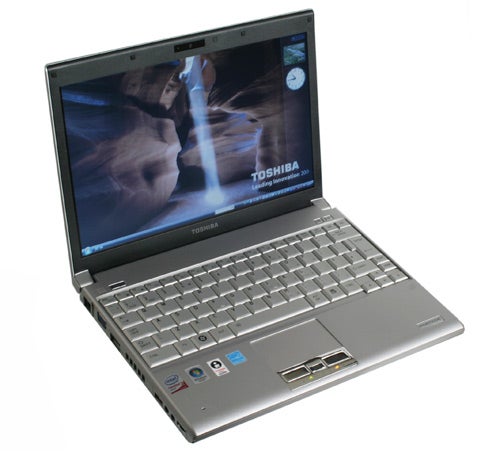 Finally there’s the issue of price, except that with the A600-14C it’s not really much of one. After all, while £921 excluding VAT (£1,059.90 inc. VAT) isn’t cheap by normal standards, for a laptop combining as many features as this it’s actually very good value. It is, in every sense, a complete package and one that’s considerably more affordable than many ultra-portables.


Toshiba’s Portégé A600-14C makes a very convincing argument for itself. It’s light and portable, but manages to pack in loads of features, including integrated HSDPA and all the security features you’d normally expect from a business laptop. Only a collection of minor niggles and a slight concern over build quality precludes it from an award, but there’s still plenty to commend here.

Here we can clearly see the performance compromise from the 1.2GHz low voltage processor used in the Toshiba, though it’s still more than capable for most tasks.

Though it doesn’t come close to the VAIO VGN-TT11WN, battery life on the A600 is pretty good for a sub-£1,000 business machine.

In a less intensive environment the Toshiba almost catches up.

While in the DVD test it pulls ahead by a significant margin. This is surprising, but one of the factors at play here could be the Sony’s brighter screen.