When we reviewed Toshiba’s original NB520 netbook, we were blown away by the design, but rather disappointed by
the utterly lacklustre specifications. Now, however, the company has fitted one
of AMD’s delectable new Fusion processors inside the same sexy chassis, adding
vastly superior graphics and HDMI-out in the process. Ladies and gentlemen,
please put your hands together for the NB550D. 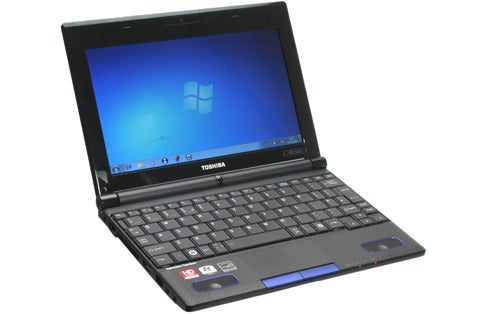 Starting off with its design, it’s identical to that of the
NB520, which is a good thing. Unlike the smooth soft finish on the likes of the
Lenovo ThinkPad X220t, Toshiba has added a dimpled pattern to the lid that
makes it look a little more like padding than a coating. Regardless, it’s not
just lovely to hold and lends a secure grip, but also prevents unsightly
fingerprints.

Most of the NB series is available in black, red, blue,
green and the brown of our previous NB520 sample, but with the NB550D you’re
limited to brown and blue. This time around, we’ve received the blue model, and
though it doesn’t exude quite the same feeling of understated class as the
bronze finish, it’s still very attractive and certainly stands out. 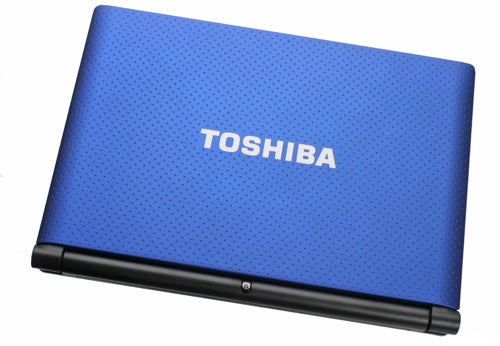 The lid’s blue hue is complemented by the touchpad buttons
and narrow speaker grille surrounds on the inside, while the rest of the base and the screen
bezel opt for black. Thankfully, that lovely, dimpled finish extends to the
palm-rests, making typing a very comfortable experience if your hands are small
enough that you can rest your palms on them properly.

As with the previous model, build quality is impeccable, and
Toshiba is definitely punching way above the NB550D’s £300 price point when it
comes to looks and feel. This premium impression largely continues when it
comes to ergonomics.

As with the NB520, the keyboard is shallow but responsive and
truly edge-to-edge. However, this time around we found feedback to be somewhat
inconsistent between keys, and the space-bar was slightly looser and noisier
than we would have liked. Shortcuts could also have been placed a little more
intelligently. Mind you, it’s still one of the better netbook keyboards around,
but the Lenovo ThinkPad X100e shows how it should be done. 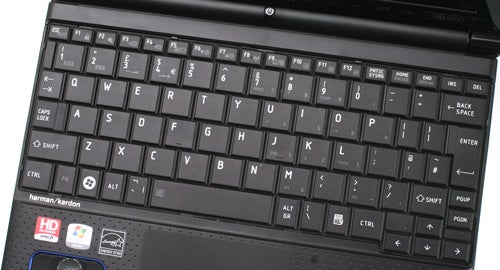 When it comes to the touchpad, its slightly rough texture
can become just a tad unpleasant after extended use, but it’s otherwise
nice enough. It’s also large enough to use some multi-touch gestures and its
buttons offer a nice click, though after the amazing frosted glass pad on the
Samsung Series 9 900X3A, it all feels slightly underwhelming.

Where the NB550D really sets itself apart from its cheaper
siblings like the NB520, however, is when it comes to specifications.

Star of the show is AMD’s brand new Fusion Brazos
architecture, which successfully combats Intel’s Atom. Here it consists of a dual-core,
1GHz C50 CPU and Radeon HD 6250 GPU. Don’t be misled by its lowly clock speed:
in the vast majority of tasks, the C50 will feel just as snappy as Intel’s
dual-core 1.5GHz Atom (as found in the NB520 or Samsung NF210).

On the graphics front, meanwhile, AMD is in a whole different
league. Unlike its rival’s solution, the Radeon HD 6250 will allow for Full HD
video acceleration, flash-based HD video and even some light gaming. 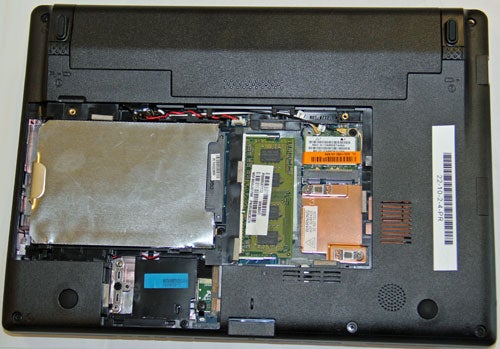 Unfortunately, Toshiba hasn’t really pulled out the stops
and given the C50 2GB of RAM to play with. Instead, you’re stuck with the same
1GB of DDR3 RAM, 250GB hard drive and Starter Edition of Windows 7 that occupy
most other netbooks. This is a real shame, but considering the NB550D is only
£20 more expensive than the NB520, we suppose compromises were inevitable. Also,
upgrading these yourself is really easy and there’s no warranty void sticker
over the access panel. 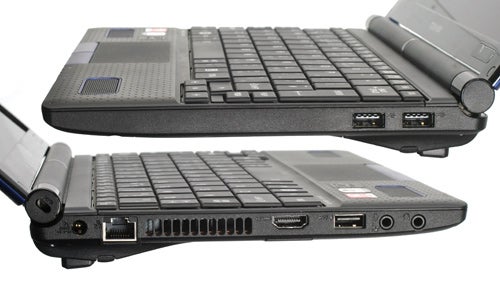 Thankfully, another area where the AMD chipset makes its
presence felt is in connectivity. The basics are the same as the NB520, including three USB 2.0 ports (one of which supports Sleep & Charge
to charge your external devices with the netbook turned off), SDHC memory card
reader, Ethernet port and 3.5mm headphone and microphone jacks, while on the
wireless front you get both Wi-Fi N and Bluetooth 3.0. Naturally the NB550D also
supports Toshiba’s Sleep & Music functionality, for more on which you
should have a read of page three of the NB520 review.

However, unlike the NB520’s analogue VGA video output, the
higher-end model offers HDMI. Along with the Radeon HD 6250’s Full HD (1080p)
video playback abilities, this lets you hook up to monitors or televisions and
turn this Toshiba into a portable entertainment centre.

Unfortunately, hooking the NB550D to an external screen is a
tempting proposition, as Toshiba has stuck with a sub-HD, 1,024 x 600
resolution 10.1in screen. Even the cheapest configurations of competing
netbooks like the Lenovo ThinkPad X100e offer 1,366 x 768, and this is yet another example of
unfortunate corner-cutting. 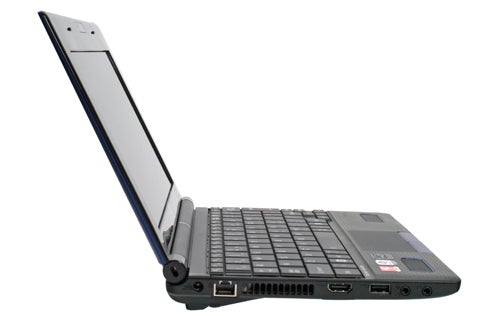 We can’t say we’re fans of the screen’s glossy coating, either,
though this does help to lend colours that extra little bit of punch and aids
perceived contrast. Viewing angles are rather narrow too, and the slight
graininess we noted when reviewing the NB520 is still present – hardly
surprising considering this screen is the exact same model. By general netbook
standards, it’s about average but that’s precisely why we hoped for better. A standard definition webcam is also integrated
into its glossy bezel.

Thankfully, the Harman/kardon speakers are just as amazing
as we remember. Whether playing movies, games or music, these stereo efforts
produce levels of volume, detail and clarity that far surpass any other
netbook, and negate the need for headphones or seperate speakers while on the move.

We were most interested in how AMD’s dual-core Fusion combo
would compare to Intel’s dual-core Atom when it comes to battery life. Toshiba claims nine and a half hours
for the NB550D. In our tests we did find this netbook to be more power-hungry
than its Atom counterpart, but don’t forget you’re getting a heck of a lot more
graphics grunt for your juice here, easily equivalent to Atom plus Nvidia ION.

Keeping this in mind, the NB550D managed an impressive six
hours and 20 minutes before giving up the ghost (looping a standard definition
video with screen brightness at 50 percent and wireless radios turned off).
Finally, AMD is competitive with Intel across the board, at least in this ultra portable low power sector.

In summary, the NB550D is a beautifully designed, well-built
netbook with superb speakers, decent ergonomics, and relatively powerful
graphics backing its dual-core CPU. Further specs are rather basic, and it’s
lacking niceties such as USB 3.0. It’s also marred by a somewhat sub-par,
sub-HD display.

However, its reasonable £300 price makes these omissions far
easier to swallow. Compared to the £280 NB520, there is no competition: the
NB550D is more than worth the tiny price difference.

Compared to most netbook rivals, it also comes out tops –
for now. The biggest challenge for the NB550D is that plenty of other
Fusion-based netbooks/ultraportable laptops will be making their way onto the UK
market in the very near future, and Intel’s Atom series isn’t standing still
either. It’s also worth noting that quite a few older generation, Celeron-based
ultraportable laptops (like the Lenovo IdeaPad U160 to name but one) with HD
Ready screens, 2GB of RAM and ‘proper’ versions of Windows 7 are now heavily
discounted, so be sure to check for any bargains before buying.

Like the NB520, Toshiba’s NB550 is very attractive and
well-built. Its AMD Fusion innards give it the ability to handle Full HD video
on and off-line as well as providing an HDMI-output, strengths which put it a
step above most budget netbooks. Other specifications are basic and the screen
is still sub-HD, but considering its low price these issues are easy to
forgive. Throw in the soft-touch finish, decent battery life and excellent
speakers, and you have one of the better entrants in its class – though heavy
discounts on older ultraportables make for strong competition.