If you’ve read any of our other recent netbook reviews you’ll have detected a common thread linking them. If you haven’t we’ll summarise now: netbooks haven’t changed. While the introduction of Intel’s Pine Trail brought with it some minor hardware changes (as well as a spate of new netbook releases), so far as the end user is concerned this new generation of netbooks differs little from the last. This is just as true of the Toshiba NB305-106 as any other netbook.


On the plus side, however, the NB305 is based on the outstanding NB200 – a netbook that received a Recommended Award from us last year. As starting points go it’s pretty good and Toshiba hasn’t messed with the formula too much, sticking with the same basic chassis.


There are some subtle changes to be seen, though. First and foremost the battery – a high-capacity six-cell unit – extends downward rather than outward. This works better visually and ergonomically; there’s no longer an ugly thing jutting out the back and the extra elevation creates a nice angle for typing. 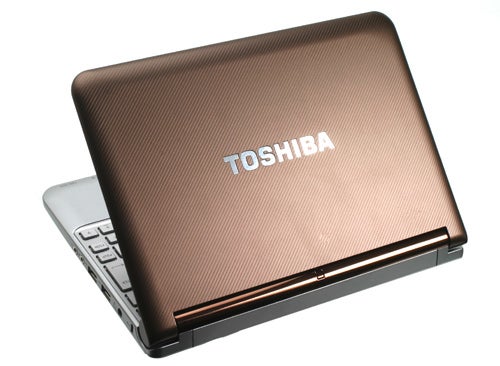 Another subtle change is the slightly tapered front of the machine, making it slightly thinner – albeit only at the front. This particular change necessitates a slight re-shuffle of the connectivity, such as the memory card reader moving from the front to the left side, but fundamentally the options remain the same.


This means three USB ports, one of which supports standby charging (‘sleep & charge’ as Toshiba calls it), VGA for video, a 10/100 Fast Ethernet port, and a couple of audio jacks. Aside from the standby charging USB port, (a handy feature it shares with the Samsung N210), the NB305 carries the same options found on 90 per cent of netbooks. 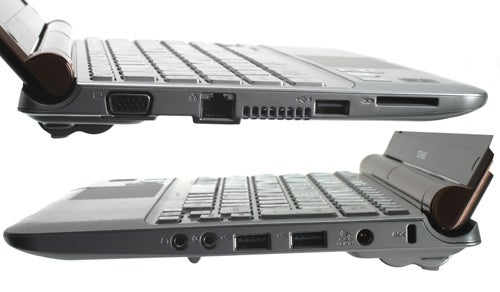 It’s a similar story for the hardware. You get an Intel Atom N450 processor that runs at 1.66GHz, 1GB of RAM and a 250GB hard drive. Toshiba is more generous than some with the wireless connectivity, however, offering both Wireless-N Wi-Fi and Bluetooth.


These additions, as well as the NB305’s more upmarket design, are reflected in the price. At time of writing it costs around £320, £25 more than most similar netbooks. If this is a little rich for your blood, Toshiba also has the sub-£300 NB300, which is more or less identical but has a cheaper, all-black design.

As there’s nothing separating the NB305’s hardware from most other netbooks, it performs predictably. Running Windows 7 Starter Edition, which we’ve found to be a decent replacement for Windows XP, it ticks along okay provided you stick to fairly basic tasks – e.g. playing music, watching standard definition video, web browsing. However, while some 720p video is playable, it stretches the hardware to the limit. HD flash video, meanwhile, is to be avoided. 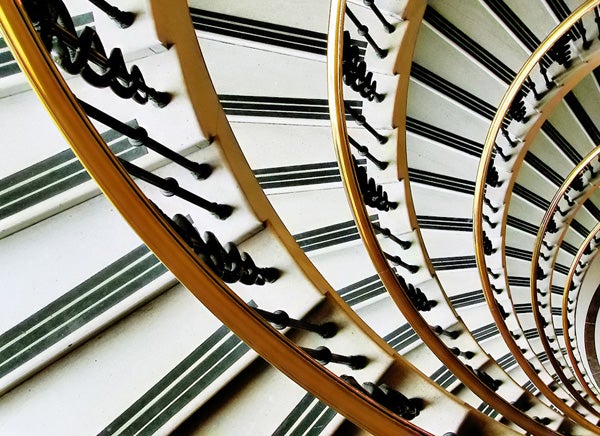 This lack of performance differential makes the finer details on a netbook far more important and none more so than the keyboard. Like the NB200, the NB305 employs an isolation-style keyboard that sports a truly superb layout. Every key is where you’d expect it to be, while the cursor keys – so often an obstacle on netbooks – are slightly withdrawn from the rest of the arrangement. Key actions are clean and snappy, though they are slightly shallower than on ordinary keyboards and this takes a little getting used to.

Another element that makes the NB305 more usable than many of its contemporaries is the touchpad. It’s nice and large, which makes it very comfortable to use, while the two buttons are separately hinged and offer excellent tactile feedback.


A good keyboard and touchpad, in addition to the excellent design, hold the NB305 in pretty good stead, but it does have one feature most netbooks don’t have: hard drive fall protection. Like most such systems it takes the form of motion sensors that detect movement, locking the hard drive heads should it be detected. We wouldn’t describe this as a knock-out feature that makes the NB305 far superior to its peers, but if you’re particularly prone to dropping things then it’s worth considering.

On the audio-visual side of things the NB305 is a mixture of good and bad. Its speakers are dreadful; they’re small, tinny and lacking in volume – facts not helped by their positioning below the front edge of the chassis. By netbook standards, though, it’s to be expected and the display makes up for the audio shortcomings. It’s bright, sharp and produces decent colours, though it does have a glossy, reflective finish that can prove irritating when outdoors. Unsurprisingly, it also retains the standard 1,024 x 600 screen resolution found on most other netbooks. 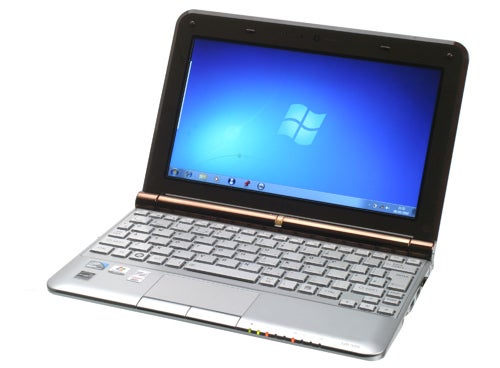 Finally we come to battery life, which has always been the most important factor for netbooks. Like the NB200, the NB305 doesn’t disappoint, though the 61 Watt-hour capacity battery doesn’t match up to Toshiba’s 11-hour claim. Playing back video at 50 per cent brightness and with Wi-Fi (and Bluetooth) disabled, it lasted six and a half hours. This is a good result and you could expect something close to nine hours depending on use, but in the same video test the Samsung N210 lasted slightly over eight hours.


Toshiba has produced another great netbook for those with more refined tastes. It delivers good battery life, looks very stylish and is great to use. However, it’s a little on the expensive side and suffers from the same limitations placed on all netbooks.