Toshiba can’t be blamed for the lack of evolution in the netbook platform, however infuriating it might be. Until someone deigns progress necessary (or nVidia ION systems begin to hit the shelves) all any company can do is make the best product possible under the limitations created by Microsoft and Intel. Toshiba has done just that with its second netbook, the NB200.


Unlike its first outing, the ill-timed NB100, this Toshiba is a 10in machine – just like most other netbooks these days. Toshiba has clearly thought carefully about how its range is positioned, with cheaper all-black versions filling in the sub-£300 market, while the more luxurious ‘satin brown’ ones like the NB200-10Z we’re looking at hovering around £349 or less. In this case it’s £339.99, though this price is discounted from the £349.99 SRP.


For the money you get all the usual features. This means an Intel Atom N280 running at 1.66GHz, 1GB of RAM and a 160GB hard drive. There’s 802.11g Wi-Fi and Bluetooth for wireless connectivity and 10/100 Fast Ethernet for wired networking. Like many netbooks of late the 10.1in display has a glossy finish, while the 1,024 x 600 native resolution is as it ever was. 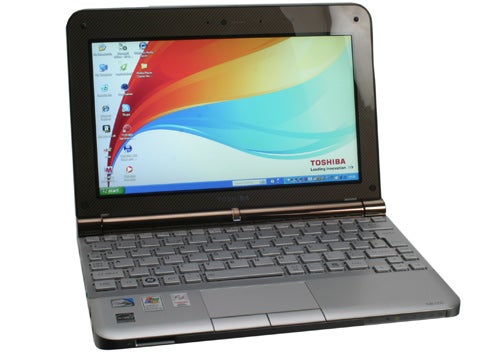 However, Toshiba also brings a few surprises to the table. Remember when netbooks came with SSDs to ensure data security? Yeah, it seems a distant memory, but while Toshiba hasn’t gone so far as to use solid state storage, it has installed a G-sensor to enable free-fall protection for the hard drive. Whenever excessive movement is detected the drive heads are locked to help protect the hard drive. It’s not quite as good as good as an SSD, which has no moving parts, but given no other netbook we can think of sports such a feature Toshiba should be praised for this move.

Another neat addition is a powered USB port on the left so that you can charge USB devices even with the netbook turned off. We’ve seen this feature in some recent notebooks but not in netbooks and it’s a welcome addition, especially given netbooks are by their nature portable.

Outside of this particular feature, though, connectivity is completely unremarkable. On the left there’s a VGA out, line-in and line-out jacks, an Ethernet port and the powered USB port. On the front is an SD card reader, while the right-side houses the other two non-powered USB ports, the power input and a lock-slot.

Since most netbooks are basically the same, design and usability have become disproportionately important – not that they aren’t important anyway. Ultimately, provided a netbook can look good, be good to use and deliver good battery life without costing the earth (see the MSI Wind U115-025UK for an example of the latter) then you’re onto a winner. So it goes with the NB200. 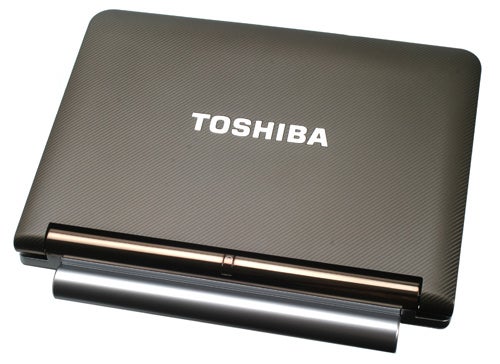 For starters it’s an attractive looking device. Unlike so many notebooks and netbooks the lid has a matte plastic finish, in this case its brown with a rather funky textured finish. This makes it very durable, though we’d still recommend getting some kind of slip-case since Toshiba doesn’t supply its own. In this sense Asus remains one of the more generous netbook purveyors.


Inside this brown theme is continued around the screen and hinge, as is the striped pattern from the lid. This is something of an acquired taste and at first we found it a little distracting, but you quickly grow used to it – as you do the only glossy refrain – the bronzed hinge section.

Happily the whole system isn’t brown, with the main body of the machine finished in silver. And, within this body, is housed the isolation-style keyboard. This exhibits some common characteristics in that key travel isn’t quite as deep as traditional keyboards; however, the key action is very crisp and positive and there’s very little flex.


Compared to some netbooks the keys aren’t the largest, but they’re more than large enough for comfortable typing. This is made all the more true thanks to the excellent layout. Cursor keys are studiously withdrawn, with Page Up and Down keys positioned intuitively for an alternative scrolling method. Basically it’s a very good keyboard; not quite the best, but still very good.

No complaints can be attached to the touchpad, either. It’s well positioned, large, and the two buttons are firm and nice to use. They’re definitely preferable to the popular choice of rocker-style switches, too, since you can hit them anywhere and still get the same tactile feedback.

Moving to the audio visual side of things, the NB200 sports one of the better netbook displays we’ve seen. It particularly impressed with its deep blacks, vibrant colour production and extremely sharp text. It’s still not a patch on a proper monitor – it relies extensively on static dithering to produce the full-range of colours and shades – but for a netbook it does the job nicely. 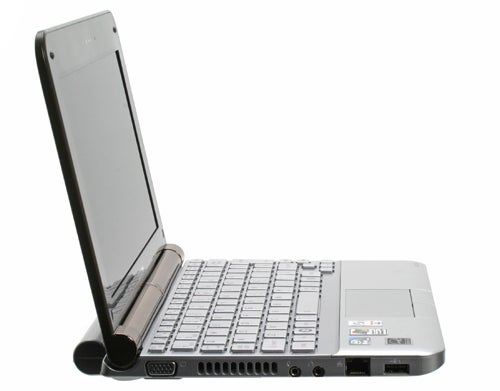 Quite the opposite can be said of the speakers, or speaker in this instance. It’s housed on the bottom and is weak, tinny and almost pointless for anything but basic status chimes and the like. In fairness we’re not too bothered by this, headphones are normally best where netbooks are concerned, but if you do like to listen to music out loud sometimes this isn’t the netbook for you.


As ever, the final piece in the puzzle is battery life and the recipe for success here is pretty simple: big battery = long battery life. Toshiba has duly obliged by providing a 63 Watt-hour capacity unit. This is large enough that it does stick out the back, but this actually proves quite useful as a handle to carry the machine by and doesn’t lift the chassis up as acutely as the likes of the Eee PC 1000HE. At 1.3kg the NB200 is about the right weight, too – any heavier and it would become a bit cumbersome. 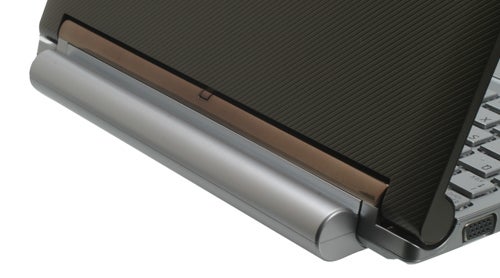 Toshiba’s quotes nine hours of potential battery life and in the right circumstances we can believe that’s possible. In video playback, with wireless radios turned off and brightness set to 50 per cent, we managed nearly eight hours. Turning up the brightness, surfing the Internet or using a 3G dongle will reduce these figures, but even in extreme scenarios you’d be hard pressed to get less than six hours.


Toshiba’s excellent power management tool is a big help here, too. Not only does it have a large selection of presets, including those for DVD playback (useful for video in the absence of a DVD drive) and presentations, you can also make your own presets and tweak the CPU speed level and cooling – among many other things.


Like any good netbook the NB200 is faultlessly quiet and remains pretty cool, only getting slightly warm when used intensively. It’s also incredibly well put together. Indeed, we’d wager the NB200 is the best made netbook we’ve reviewed, perhaps only matched by the Samsung range. Combine this with the durable finish and the free-fall protected hard drive and you’ve got a netbook that should last longer than most. 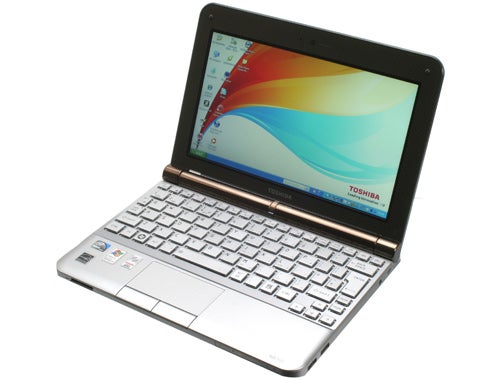 
Though it’s bound by common restrictions, Toshiba has managed to add one or two unique features of its own and delivers in the all the right areas. There’s no shortage of good netbooks these days, but the NB200 is definitely one of the best. 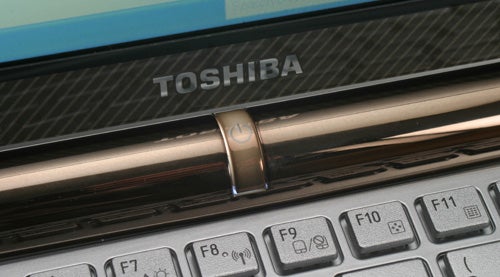 (centre)
The power button glows white when the machine is on.
(/centre)

(centre)
Status lights on the front are visible when the lid is shut.
(/centre)

(centre)
The integrated webcam has just one mic, but it is integrated into the bezel.
(/centre) 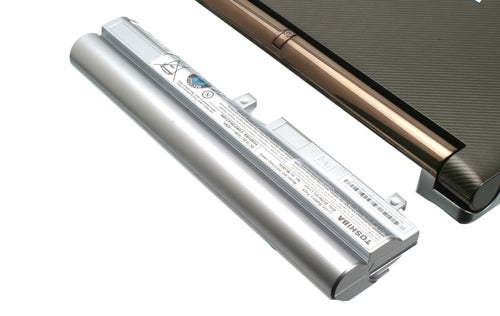 (centre)
The battery has a 63 Watt-hour capacity that can deliver as much as nine hours of use.
(/centre)