What is the Toshiba Mini 3D Sound Bar II?

Measuring just 290mm wide, Toshiba’s compact speaker unit is about a third of the size of a regular soundbar, making it an ideal TV sound upgrade in rooms where space is tight. It’s an updated version of last year’s Mini 3D Sound Bar, adding new sockets and features while upping the overall power output from 60W to 90W.

With its compact dimensions, simple setup and minimal cables, Mini 3D Soundbar II scores high on convenience and clutter-free installation. But with so many other impressive-sounding audio solutions on the market, it needs to pull a top performance out the bag to be worth considering. Let’s see how it fares.

The design of the main soundbar is a refreshing break from the norm. In fact, it’s hard to believe this is a soundbar at all – its shape and size make it look more like an iPod dock. That means it’s perfect for placing on top of a TV stand or shelf, while the discreet, minimal styling helps it blend in with its surroundings.

The sloping, cloth-covered sides and matt black top panel look stylish and it feels reassuringly chunky, although there’s a plasticky feel to some of the fittings.

On top is a row of buttons for up-close control (volume, input, Bluetooth, power), plus Toshiba has added a row of LEDs to indicate volume level, inputs and sound modes – they glow white, green or blue to denote different settings. Two more tiny LEDs shine through the front cloth indicating power and Bluetooth status.

On the back, the socket line-up is much more generous than the original Mini 3D Sound Bar. For starters, Toshiba has added two HDMI inputs and one ARC-compatible output, allowing you to connect a Blu-ray deck and another HD source directly to the soundbar, rather than running them through your TV first.

But if you’d prefer a straightforward single-cable connection between the Toshiba and your TV, no problem – there’s an optical digital input too. There are no coaxial or stereo RCA inputs this time round, but you do get a 3.5mm minijack input for portable music devices.

Finding room for the subwoofer shouldn’t be an issue – at just 246mm high and 220mm wide it’s remarkably compact, plus the wireless connection means you can place it where you like. And it’s not an eyesore either, with a tasteful black finish and curved corners. 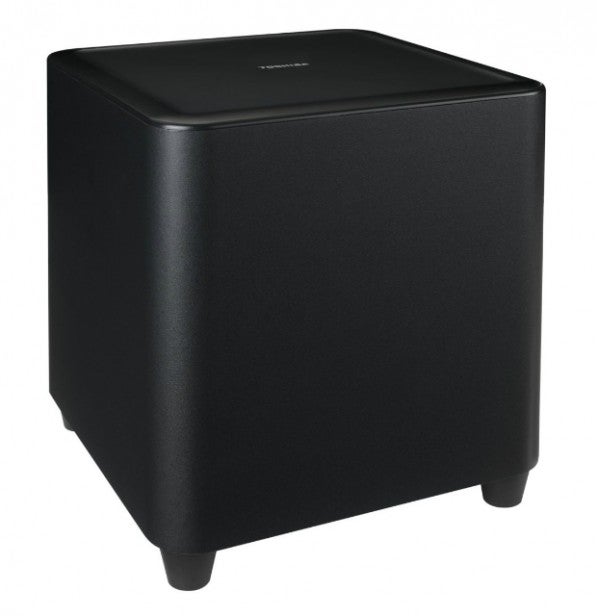 The ‘3D’ of the name comes from Sonic Emotion’s Absolute 3D Sound processing. This uses the science of sound field control to expand the sweet spot (the place in the room where you get optimum sound quality) so you can enjoy an immersive sound no matter where you sit.

The original Mini 3D Sound Bar came equipped with Bluetooth, but for the sequel Toshiba has added NFC, which eases the pairing process with Android devices – just tap them on the top-mounted NFC logo.

There are three sound presets – Game, Music and Movie – plus low, medium and high bass settings. The soundbar outputs 90W in total (4 x 15W from the bar and 30W from the sub), with four 5.1cm drivers and a 10.2cm driver inside the sub.

Finding
the right spot for the soundbar is made easier by a balance switch on
the back that offsets the speaker output depending on which side of your
TV it’s placed. After that’s sorted, cable connection is a breeze and
the sub pairs with the soundbar automatically. Both components need
their own power supply though so make sure you have enough plug sockets
nearby.

Only a true dimwit would find the Mini 3D Sound Bar II
difficult to use, but the lack of a display panel means it’s not as
intuitive as other soundbars. It takes a little while to remember what
the different coloured lights mean, and because they’re on top you can’t
see them from the sofa – a rookie mistake. But to Toshiba’s credit, the
previous version had no indicators at all, so this is a vast
improvement.

Toshiba has also improved the remote. Instead of the
horrible blister-button affair of its predecessor, the new zapper is
larger and sports satisfying rubber buttons. It sits more comfortably in
the hand and the simple layout means there’s no confusion when finding
the right key. There are separate buttons for each sound preset and
input, plus keys for bass level and 3D. A cross in the middle governs
volume and Bluetooth playback.

The remote learning feature lets
you programme the soundbar to remember IR codes from your TV’s remote,
if you’d rather stick with a single handset.

If
we had to sum up the Toshiba’s performance in one word, we’d go for
‘surprising’. Play a movie and you simply don’t expect such a big,
imposing soundstage to emerge from these small boxes. It’s flawed in
places, but Toshiba should be congratulated for delivering on its
promise of loud room-filling sound.

With Wrath of the Titans on
Blu-ray, the swords ‘n’ sandals action boasts decent dynamics and
satisfying weight. As Kronos causes havoc at the movie’s finale, it
brings impressive scale to the titan’s fiery explosions and bellowing
voice.

This
ability to fill the room is due largely to the admirable efforts of the
sub. Its hefty bass disseminates seamlessly into the soundstage, adding
depth and pulling everything together. It could be a bit tighter, with
evidence of overhang on particularly loud bass effects, but stick to the
low or medium settings and it’s not too bad.

Absolute 3D is also
impressive, although its effects are most noticeable with music. The
shuffling Latin percussion and hi-hats of Louie Vega’s Elements of Life
album spread out far beyond the width of the unit, while the vocals,
basslines and guitars stay locked to the centre. Turn it off and the
sound is smaller and narrower, and you only get the best results when
sitting square-on. With movies the effects are less obvious, but the
sound is certainly richer and more expansive than that of a TV.

There
are a few negatives to report – high-frequency reproduction is passable
but it glosses over the finer details that more refined rivals would
dig out, plus dialogue and high-pitched effects are a little strained
and shouty at high volumes. 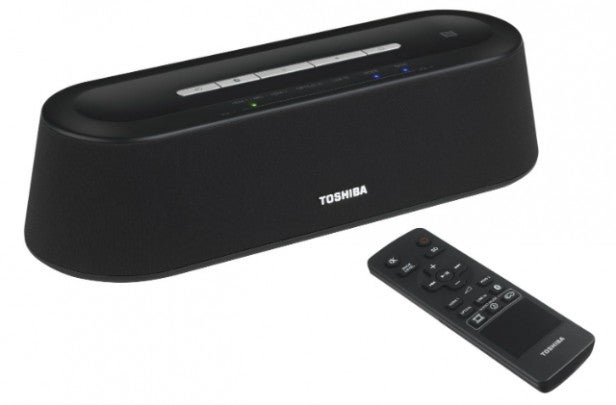 Should I buy the Toshiba Mini 3D Sound Bar II?

A vast improvement on its predecessor and the SB3950E1,
Toshiba’s Mini 3D Sound Bar II is a terrific purchase if you absolutely
can’t accommodate a full-size soundbar – but if you can, then bear in
mind there are better sounding models for the money. The Wharfedale Vista 100 offers greater detail, tighter bass response and better high volume handling.

But
for the most part the Toshiba’s performance is impressive, with a
surprisingly big soundstage, plenty of well-integrated bass and a
generally dynamic character. And when you throw its easy operation,
space-saving design and useful features into the mix, we doubt you’ll be
disappointed if you end up taking one home.

Next, try our Best soundbars