I can still remember getting my hands on the origingal Toshiba Libretto. It was a Japanese import that Toshiba had supplied to Computer Buyer well before the UK launch, meaning that I had to contend with a Japanese keyboard and Windows installation, but even so, I couldn’t help but be amazed at what Toshiba had achieved. Back in 1997 the idea of ultra-portable notebooks was still a pretty new concept, so when a tiny, fully functional PC arrived on the scene it was bound to cause a stir. But here in 2005 things are somewhat different. The ultra-portable notebook is commonplace, and mobile workers expect full functionality from a device as light as a feather. So how does the Libretto measure up in a modern environment? 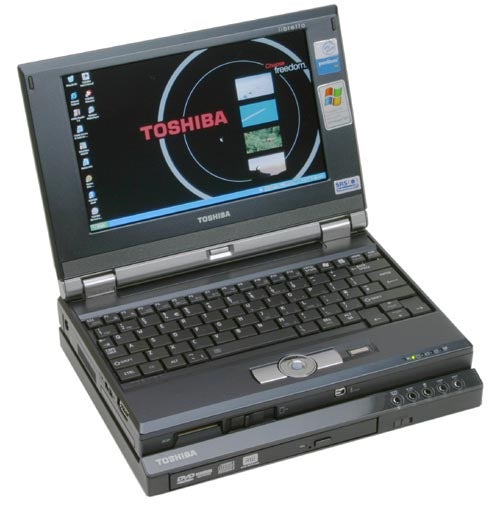 One thing is for sure, the Libretto still gets a reaction when you take it out of your bag. Pulling such a small PC out in public always elicits curious glances and much over the shoulder peering. You see, even in today’s climate, the Libretto is still pretty small. Talking of size, let’s get the basics out of the way. The Libretto measures in at 210 x 165 x 33.4mm (WxDxH) and weighs a feather light 980g. Now that’s pretty impressive, but you should also consider that the Fujitsu-Siemens LifeBook P1510 weighs in at 1kg on the nose, while the super svelte Sony VAIO X505 weighs only 820g. 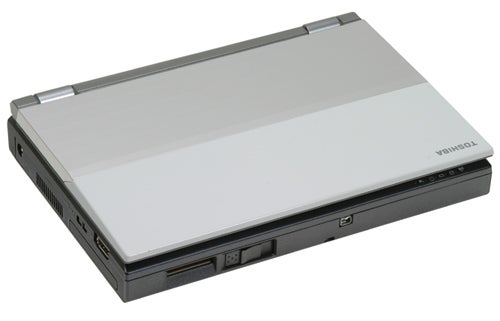 So, the Libretto isn’t the lightest mobile computer around, but it is very small. That said, it’s not as small as the Sony VAIO Type U or the OQO model 1, but then the former doesn’t have a keyboard and the latter has a qwerty thumb-board. But having a keyboard is one thing, having a usable keyboard is something else altogether.

When I looked at the original Libretto I remember thinking that the keys were just too small to type on comfortably. In fact I vividly recall comparing the Libretto keyboard to the one on my Psion Series 5 PDA and coming to the conclusion that Psion had squeezed a far better keyboard into a much smaller device. To be fair though, Psion didn’t have to also squeeze in things like a hard disk, colour screen, proper CPU or memory, but the fact remained that typing on my Series 5 was easier than typing on the Libretto. 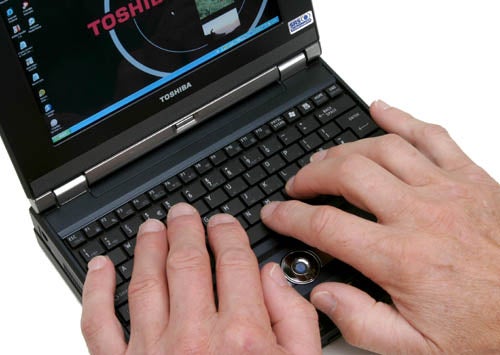 I had assumed that when Toshiba resurrected the Libretto, updating the keyboard would be paramount, but unfortunately it feels much like the one I used all those years ago. Putting it simply, the keys are just too small to type on. Now, anyone who reads my notebook reviews regularly will be aware that I usually don’t have a problem with small keyboards, since I have pretty small hands. However, the keys on the Libretto are too small even for me to type on. Don’t get me wrong, it’s not impossible to type on the Libretto, but you’re not going to be typing very fast. No matter how carefully I positioned my fingers, as soon as I tried to raise my typing rate to a respectable speed, I started miss-spelling pretty much every other word. 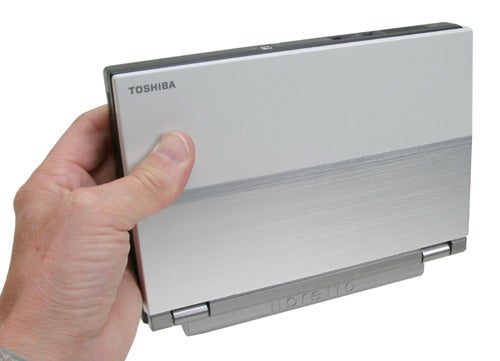 Unfortunately, the keyboard seems to be a victim of dimensions – in an effort to make the Libretto as small as possible, Toshiba has made it almost unusable as a mobile computer. The chassis would only have needed to be extended by a couple of centimetres to make all the difference. Making the device 2cm wider would have allowed the keys to be that little bit larger, since there’s already plenty of space in front of the keys that could have been utilised. In fact, if Toshiba had stuck to the original Libretto’s trackpoint placement, there would have been even more room for larger keys. You see the original Libretto had the trackpoint mounted in the lid, next to the screen, while the selector buttons were on the back of the lid – the new Libretto has the trackpoint and buttons located below the keys, like a traditional notebook, despite the fact that there’s plenty of space next to the screen.

In use the trackpoint works very well, while the left and right selector buttons are actually placed either side rather than below it. To the right of the trackpoint is a fingerprint scanner for the implementation of biometric security. Now I’ve had masses of email before about the failings of fingerprint recognition as a security measure, and I accept most of the points. However, I maintain that any extra level of security is a good thing, and making it easy for an end user to implement biometric security is better than that user implementing no security at all. 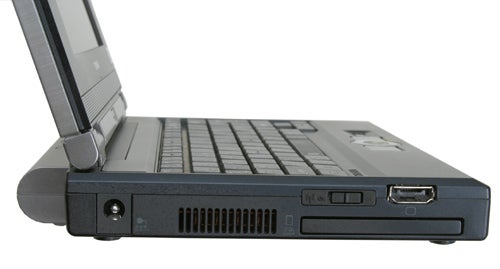 The screen is a 7.2in TFT affair, complete with Toshiba’s Trubrite coating – basically this is the same as Sony’s X-Black or Rock’s X-Glass coating which gives increased contrast and bright, vivid colours. With a native resolution of 1,280 x 768 some may find this screen difficult to work on, but to be honest I’ve never really had a problem with small, high resolution screens – but then maybe that’s why I have to wear glasses now! Of course where a high-contrast, widescreen display usually excels is gaming and movie watching environments, but you’re not going to be able to do either on the Libretto – the integrated graphics aren’t up to game playing and there’s no integrated optical drive, so DVD watching is off the menu too. 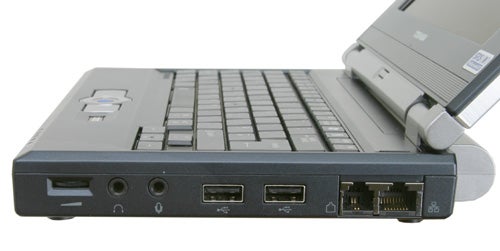 Despite its small size, the Libretto has a liberal sprinkling of features around its chassis. On the right you’ll find a modem socket and a network port for the 10/100 Ethernet adapter. Also here are two USB 2.0 ports, a headphone socket, a mic socket and an analogue volume wheel. On the left is the power socket, a hard switch for the 802.11b/g WiFi adapter, a Type II PC Card slot and a proprietary output for connection to an external monitor. The front houses an SD Card reader, an eject switch for the PC Card slot and a four-pin FireWire port. While on the subject of connection options, the Libretto also has integrated Bluetooth – version 2.0 no less.

Inside Toshiba has equipped the Libretto with an Intel Pentium M Ultra-Low Voltage CPU running at 1.2GHz. This is supported by 512MB of memory and a 60GB hard disk – pretty reasonable specs for a device this size.


Bundled with the Libretto is a docking base containing a DVD writer and, well and nothing as it happens. I found this a little odd, since it would have made sense to build some port replication into this base, especially considering there’s no D-SUB port on the machine itself. The base does have multimedia controls so you can playback your media files without resorting to using the trackpoint, but I do feel that Toshiba has missed an opportunity of adding some extra functionality.

Performance wise, the Libretto is neck and neck with the Fujitsu-Siemens LifeBook P1510, turning in a SYSmark 2002 score of 154 compared to 152. When it comes to battery life the Libretto edges ahead with 229 minutes, compared to 190 – although the Fujitsu-Siemens does ship with an extended battery, but Lars didn’t have time to test it before FS snatched the machine back.


When it came to finding a price for the Libretto I was surprised at the broad spread. I found one price near £1,500, while the best price was under £1,200! Working on the latter price, the Libretto looks like a reasonable option for the mobile worker, but when you throw the keyboard into the equation, the attraction soon melts away. 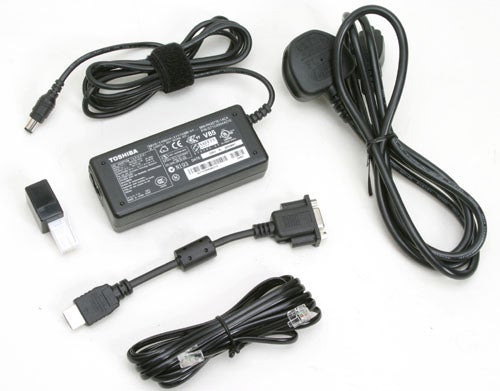 
The Libretto was a landmark product when Toshiba launched it back in the late nineties, but unfortunately it hasn’t worn well. With devices like the Sony TX1XP offering better keyboard and screen, longer battery life and an integrated optical drive with an added weight of only 250g, the Libretto seems somewhat out of its depth. Throw the Fujitsu-Siemens LifeBook P1510 into the mix and the Libretto is in even more trouble. Ultimately, despite stiff competition, with the right ergonomics the Libretto could have been great. Unfortunately the keyboard is very poor and brings the whole package down – I defy anyone to type at speed while maintaining a decent level of accuracy.