What is the Toshiba Kirabook?

The Toshiba Kirabook (Kira in the UK) has been the company’s premium 13in ultrabook line for a number of years now and its latest incarnation brings with it an optional 2,560 x 1,440 touchscreen, the latest Intel Broadwell processors and nearly 10 hours battery life.

All wrapped up in a slim and light magnesium alloy chassis, on paper it’s certainly got what it takes to beat the likes of the MacBook Air 13in, Dell XPS 13 (2015) and Lenovo ThinkPad X1 Carbon (2015). The question is whether it lives up to that expectation.

See also: These are the 10 best laptops currently available

Ostensibly the Toshiba Kira is every bit as sleek and premium looking as its competitors. It’s at most 18mm thick, weighs under 1.3kg and is clad, inside and out, in metal. However, it doesn’t quite all come together.

It’s those little design details that let it down. Things like the mismatched corners – the front ones are square, the rear ones rounded – and the rather cluttered looking underside with its swirling grille pattern and oddly large screws just take away from a sense of cohesion.

Open it up and the chromed touchpad surround feels slightly out of place while the rim round the edge of the base looks like something you’d expect of a cheaper device. 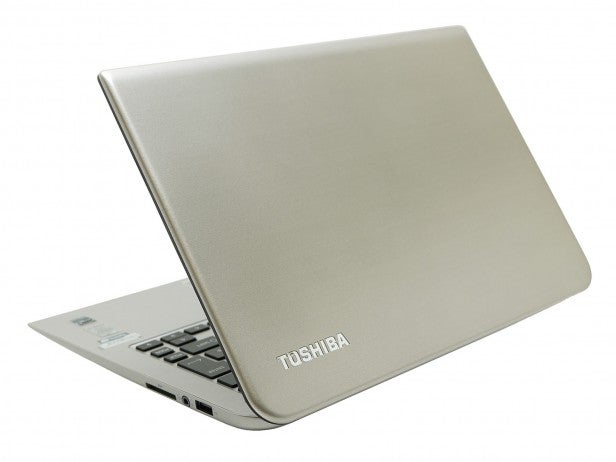 The choice of Magnesium alloy doesn’t help either. Although technically a wonderfully light and strong material it can’t be worked and finished in the same way as aluminium. As such the pieces are moulded like plastic, rather than milled from solid billets of metal, and it feels that way. There’s more give in the panels and edges just don’t have that same sharpness you expect.

It also doesn’t have the same quality of finish so needs to be painted to get a uniform look, and this again just puts you in mind of a cheaper, plastic product.

One last disappointment, on the design front, is the power brick. Like the Dell, it’s of the old-school mid-cable variety rather than being integrated into the plug. This makes it markedly more unwieldy than those included with the MacBook Air or Asus Transformer Chi T300. 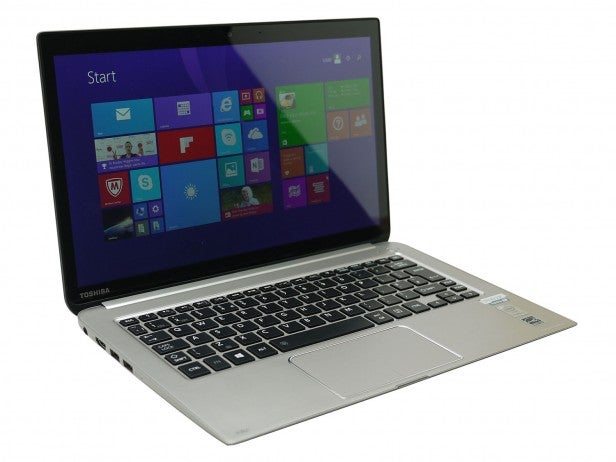 When it comes to features, the Toshiba Kira (2015) wants for very little. The headline of this flagship model is its 2,560 x 1,440 resolution touchscreen, though a non-touch 1080p version is also available.

This is joined by connectivity that is a clear step above the rest with not one, not two, but three USB sockets (though only one is USB 3.0), a full-size HDMI socket and your obligatory headphone and SD card sockets. The latter being of the standard half-depth variety, where the card sticks out.

One of the USB sockets also supports sleep and charge so you can charge other devices from it without having the laptop on (though it needs to be plugged in).

Inside it’s capable too and comes armed with the latest quad-core Intel Broadwell Core i7-5500U processor, 8GB of RAM and a 256GB SSD – double that of most ultrabooks.

That Intel processor also incorporates the graphics side of things, which in this case is the Intel HD Graphics 5500 GPU (24 Execution Units [EUs] clocked at 300 – 950 MHz). This won’t be a gaming powerhouse but this GPU is an upgrade over those in last year’s equivalent ultrabooks and it’ll play most modern games, just at very low resolutions and detail settings.

Network connectivity is limited to wireless only – unless you buy a USB Ethernet adapter – but you’ve got the latest 802.11ac Wifi and Bluetooth 4.0 onboard.

Backlighting is included on the keyboard, which although fairly common is still by no means something all ultrabooks include. 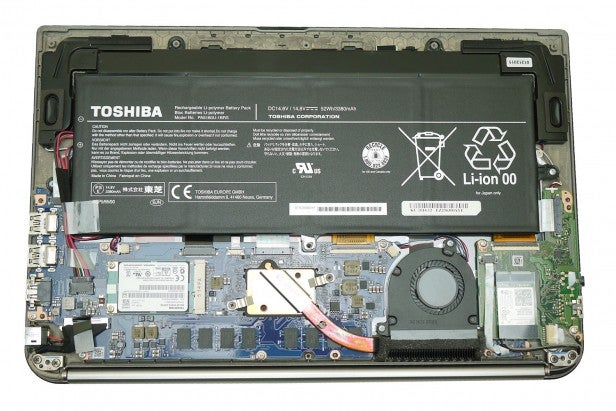 Removing all those larger than average screws from the backplate and it’s easy to prize the back off to reveal all the components inside. However, very little of it is removable/upgradeable. Things like the memory and CPU are soldered on – as they are on most ultrabooks – leaving only the SSD and WiFi as removable cards.

Intriguingly the SSD uses the mSATA form factor which most laptop manufacturers have moved on from, instead using m.2. That said, you can still get large and fast mSATA drives, such as the Samsung 850 Evo mSATA, so if you fancy upgrading to a 1TB drive, the option is there.