If you’re a movie buff you’ve probably been keeping a close eye on the next generation of optical formats. In fact the replacement for DVD has been a talking point for quite some time and now that both HD DVD and Blu-ray have officially hit the streets the amount of discussion is only set to increase. The most obvious question being asked is which format to go for, since no one wants to be left with redundant hardware and software. As always though, it’s the early adopters like me who will bite the bullet and buy into these new high definition formats. Why? Because we simply don’t have the patience to wait around and see how things pan out.

When the first generation of Blu-ray players launched a couple of months back, the price tags were scary enough even to put off some early adopters. That said, I can remember first generation DVD players costing over £1,000 too. I was therefore surprised and a little sceptical when Toshiba told me that it planned to sell its HD DVD player for around half the price of the Blu-ray competitors. But sure enough, sitting under my TV right now is the HD-E1 – an HD DVD player with a recommended retail price of only £450. Even more amazing is that the HD-E1 is already available for under £350 online!


Despite the HD-E1 being the first HD DVD player to launch in Europe, it’s actually second generation hardware. The HD-XA1 that launched in the US last year never made it over to these shores, but considering that it was a thinly disguised Pentium 4 PC with an HD DVD drive, that’s no big surprise. So, whereas the HD-XA1 was massive, and extremely slow to start up, the HD-E1 is very slim and only slightly slow to start up. To be fair, the HD-E1 doesn’t take the age that the HD-XA1 took, but you are left twiddling your thumbs for a minute or so after powering it on. 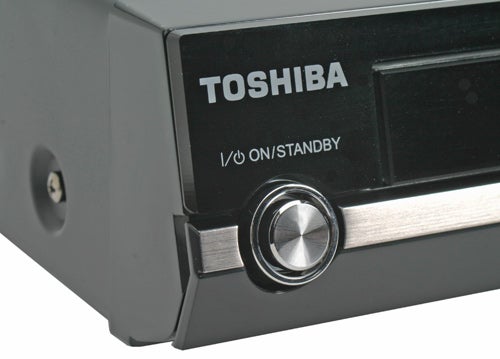 Design wise, the HD-E1 looks pretty good – at only 65mm high, it will fit unobtrusively below most TVs. Finished in black and silver, the HD-E1 has an attractive, minimalist look about it with only the power and eject buttons on show. Pulling down a near-invisible flap reveals Play, Stop, Pause and Skip buttons, as well as a couple of USB ports. Strangely though, these ports are described as “Extension Ports” rather than USB and the manual states “The EXTENSION ports may be used in the future for additional control options”. I’m not certain what that means, but I’m hoping that a firmware update could bring the ability to stream video from USB devices.

The rear of the HD-E1 is surprisingly sparse for a cutting edge home cinema product. There’s a single HDMI 1.2 port, which will be the preferred connection method, but there’s also a set of component video connectors, an S-Video port and (god forbid) a composite video port. There’s also both analogue audio and optical digital audio outputs, although if you use HDMI (as you should) then you’ll be pumping the digital audio along with the video. Of course if you have an external surround sound amplifier or processor you’ll probably want to pipe the optical out to that.

The final connection at the rear is an Ethernet port, which allows you to make use of all the online, interactive features that HD DVD brings to the party. What does this mean? Well, let’s take the US release of Miami Vice for example, which will give you access to undoubtedly useless, but nonetheless fun features like GPS positioning. Basically you can get GPS coordinates for pretty much any location in the film, should you ever wish to visit that EXACT spot while you’re in Florida. Of course a great many of these interactive features will involve you getting your wallet out – really like the watch that guy in the movie is wearing? Well why not just hit a button on your remote and buy it?


OK, I might be slightly cynical about the online features, but there is little doubt that the studios see it as a revenue opportunity. On the plus side though, it does also open the door for some interesting features for real movie buffs. No longer will you have to stick your disc in a PC to get at the online extras, you’ll be able to access them from the comfort of your sofa. Of course Blu-ray will be offering a similar online experience, but the BD Live service isn’t up and running yet. It’s also worth noting that a network connection is not mandatory on a Blu-ray player, which is why the initial batch of players have no Ethernet ports, and thus will not be able to access online content once it becomes available.

Being that Toshiba is offering the HD-E1 at such a bargain price compared to the competition, it comes as no surprise that a few compromises have been made on the feature set. The HD-E1 will happily output both 720p and 1080i resolutions, but it falls short of outputting a 1080p signal. The more expensive HD-XE1 will support 1080p output, and I’ll be reviewing that as soon as I get my paws on a sample. The audio output is also limited to a maximum of 5.1-channels, but I maintain that unless you have a living room the size of an aircraft hanger, a 5.1-channel system will be more than sufficient to create a convincing sound envelope. The HD-E1 does support the new Dolby TRUE HD and dts-HD standards, although only the core standard for the latter. That said, without an HDMI 1.3 port the HD-E1 has to decode 5.1-channel Dolby TrueHD or Dolby Digital Plus and output raw PCM.

You get support for all three HD video codecs – MPEG2, VC1 and AVC (H.264). The latter is particularly useful considering that there are already HD camcorders appearing that record in AVC format and write to DVD discs. The first generation of HD DVD movies have generally favoured the VC1 codec, which is far more efficient than the older MPEG2 codec used by much of the first generation Blu-ray releases. 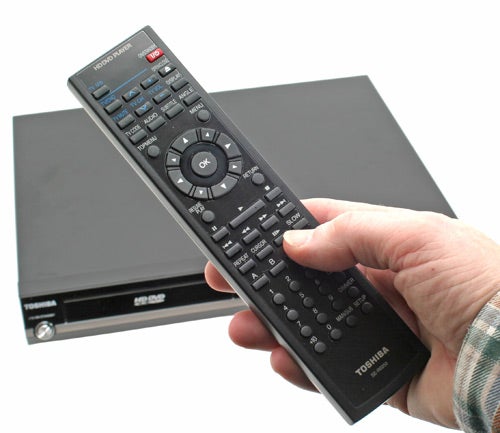 HD DVD playback proved to be awesome, especially when coupled with a 1,920 x 1,080 panel. The King Kong disc that proved to be so impressive when I tested the Xbox 360 HD DVD drive pulled out even more stops when coupled with the HD-E1. The clarity and sharpness of the image was, quite simply stunning – again highlighting the limitations of even the best CGI effects when viewed in HD. The depth of field during the jungle scenes was also spectacular, while the vivid and rich colours just drew me into the scene.


But surprisingly it wasn’t the HD DVD playback that impressed me the most with this player, it was the standard DVD playback. The HD-E1 will upscale standard DVDs to 1080i and the results are very, very impressive – so much so that Benny actually thought I was watching an HD DVD, when in fact I was watching a standard DVD. Of course when I switched to an HD DVD disc he could clearly tell the difference, but what this player can do with your existing DVD collection is nothing short of staggering.


Obviously the quality of the upscaled image is dependant on the source disc, but I found that even poor quality DVDs looked considerably better when played back on the HD-E1. Feed this player a good print though, and the result is very special. I fired up the three disc Special Edition of Black Hawk Down and was completely blown away by the resultant images. Watching the helicopters fly over the coast on their way to the doomed incursion looked breathtaking – hopefully this will make up for the fact that the high definition release of Black Hawk Down is Blu-ray bound. 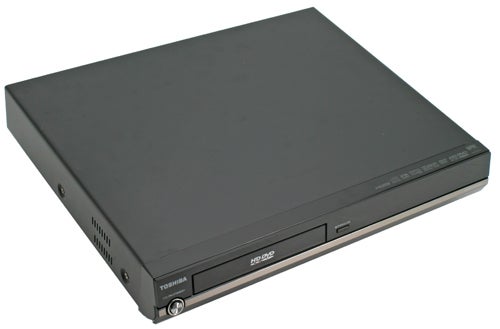 On close inspection you can see the odd jaggie on the upscaled DVD content, especially when you’re panning across uneven surfaces. But what’s really impressive is how good facial close-ups look, it really does appear as if there is more detail there, even though I know it’s just very clever interpolation.


Like the Xbox 360 drive, the HD-E1 will happily play HD DVD discs from both Region 1 and 2, but it resolutely refused to play anything but Region 2 DVDs. I’m sure that a hack will appear on the Net at some point to enable multi-Region support on the HD-E1 though, but of course Toshiba could never support such a feature officially!

Unfortunately the HD-E1 falls foul of my usual bugbear with Toshiba products, an ugly and poorly designed remote control. There’s nothing intrinsically wrong with the remote control, it’s just that it looks totally generic and not the kind of thing you’d expect with a cutting edge AV product like this. What’s strange is that the Toshiba 17in LCD TV that sits in my kitchen has a better looking remote than the recent examples I’ve seen. It’s a real shame because Tosh knows how to design good looking kit, but it seems that the design budget dries up before the remote is considered. The other disappointment is that the remote doesn’t light up, so if you’re watching a movie with the lights down you’ll have a tough time finding the right button. 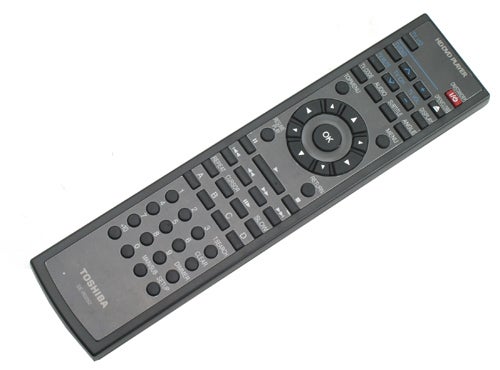 The big question is whether I would buy the HD-E1 and the answer is probably no. Personally I’d be willing to pay a little extra for the HD-XE1 when it arrives – assuming it lives up to my expectations. But would I recommend the HD-E1 to anyone else? Definitely! If you’re looking for an affordable step into high definition movie collecting and you want to get the most out of your existing DVD collection, the HD-E1 is a bit of a no brainer.


Toshiba has really raised the bar with the HD-E1, producing a high quality HD DVD player at a very affordable price. Although £350 is a lot of money to many people, considering that a Blu-ray player will cost you well over twice as much, the HD-E1 is a bit of a bargain. Toshiba has even thrown an HDMI cable into the box which will save you a few more quid.


The HD-E1 may be lacking a few of the features that it’s high-end brother will have, but you’ve still got everything you need to make the most of that shiny new HDTV you bought for Christmas. The inclusion of the Ethernet port also means that you’ll be able to receive firmware updates for the player to potentially increase functionality in the future.


The battle between HD DVD and Blu-ray is far from over, but for now I have to say that HD DVD is looking like the more attractive option. With cheaper hardware, better quality software and online features that actually work, the balance of power has definitely shifted towards the HD DVD camp.