Despite its muscle in other parts of the audiovisual market, Toshiba is surprisingly not a big name in camcorders. But back in 2006 it launched the Gigashot range, taking advantage of new video formats which record to hard disk, a key technological area for Toshiba. Although the reception of the first few models was a little muted, Toshiba has continued to develop its Gigashots, and the latest in the line targets the premium high definition market – which is increasingly where all the action is. With a 100GB hard disk, the Gigashot A100FE hopes to compete alongside Sony, Panasonic and Canon. But does it have what it takes? 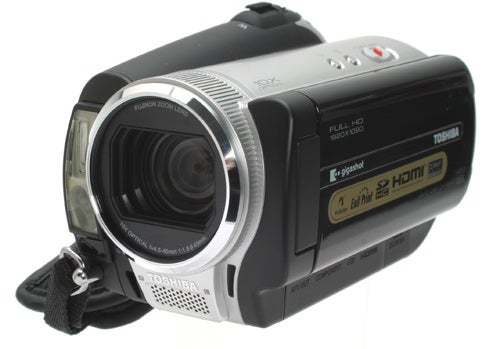 With its built-in hard disk, the Toshiba isn’t as light as some of the camcorders we have seen recently, such as Sony’s HDR-CX6EK or Panasonic’s HDC-SD9. Weighing in at around half a kilo, and measuring nearly 14cm in length, you will definitely want a camcorder bag to transport it. As with Canon’s and Sony’s HD camcorders, the Gigashot uses a CMOS sensor. It’s a similarly sized sensor, too, offering a healthy 1/3in diagonal and 2.4-megapixels. The camera’s Fujinon lens offers a reasonable 10x optical zoom, and you can add x20 and x80 digital zoom on top, if you like your images blocky. 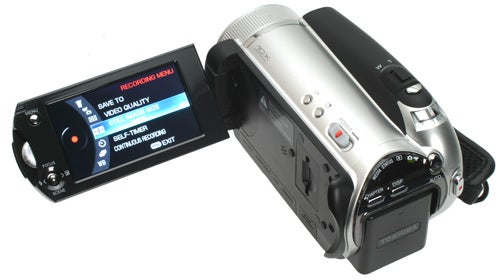 Like virtually every new high definition camcorder these days, the Gigashot uses MPEG-4 AVC/H.264 compression. In this case it isn’t the AVCHD standard, but something called HDMV instead. This is part of the Blu-ray specification. There are three quality modes available – XQ, HQ and SP. The top XQ mode boasts 18Mbits/sec – an even higher data rate than Panasonic’s HDC-SD9 and HS9, although the frames are interlaced rather than progressively scanned. HQ operates at 12Mbits/sec and SP at 9Mbits/sec. 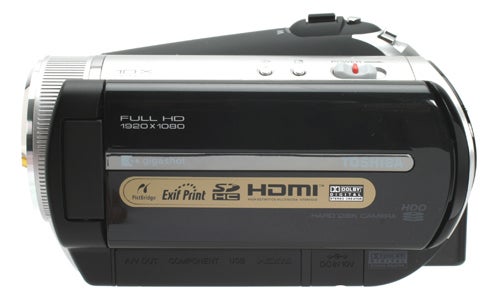 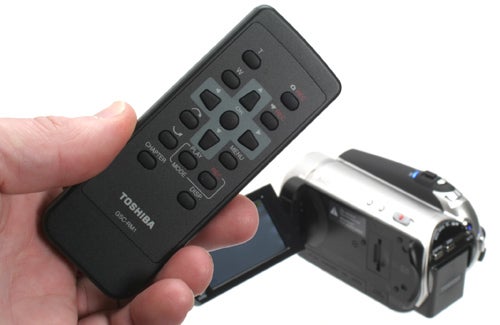 Despite the Gigashot’s high video quality specification, Toshiba hasn’t included a lot of features for the enthusiast. The body of the camcorder would have been big enough for an accessory shoe, but there isn’t one. The AV connections are all output only, and don’t include a microphone input nor headphone minijack. At least the battery is not enclosed, opening the possibility of larger capacities than the 1,200mAh unit supplied in the box. A 2,400mAh battery is an optional extra. 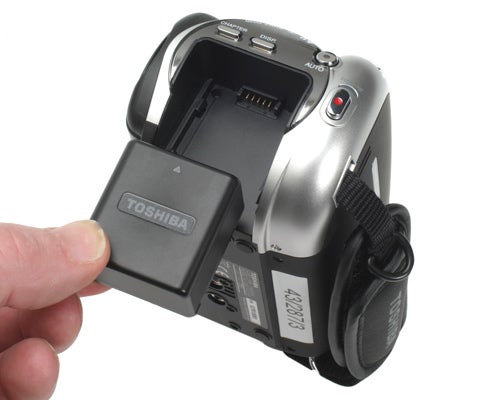 In the default Auto mode, the camera takes care of absolutely all settings. The only options available to the user are zooming and initiating a recording. The auto button glows blue when activated, and so do the buttons for zoom and record – presumably to guide the total novice. The system of powering on and off when the LCD panel is opened and closed is also convenient for the new user. 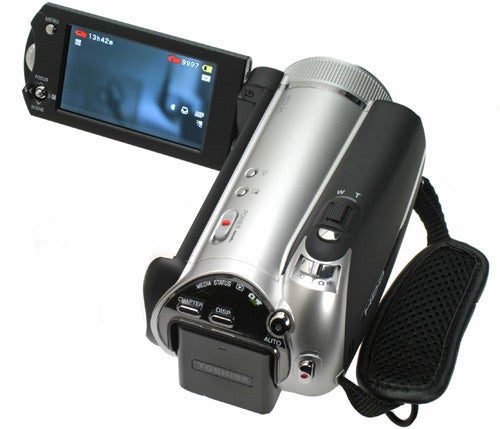 But switch out of auto mode and a few manual controls do become available. Separate buttons are provided for the built-in video light and backlight compensation, and the joystick can enable manual focus, exposure control, scene modes and flash configuration. Manual focusing operates via a wheel on the edge of the LCD, rather than a lens ring, but it is still quite easy to use. Scene modes include Portrait, Landscape, Sports, Night Scene, Snow&Beach, Sunset and Stage. The exposure control provides settings from -6 to +6, but there is no indication how this relates to aperture or shutter, and no direct control over either. 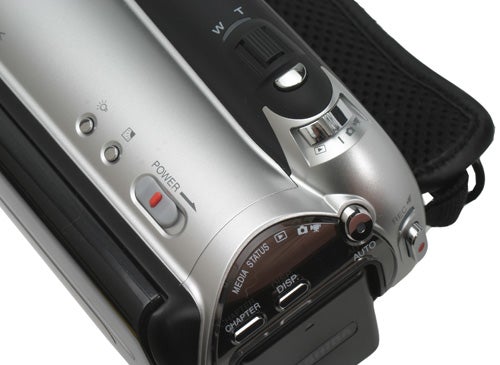 The rest of the functions require a trip to the menu system. You can use either the joystick or the wheel on the LCD edge for navigation. Aside from basic camera settings, the menu lets you raise the video gain to one extra level. You can switch between averaged and spot metering for exposure, toggle focus assist, and select one of the five preset white balance settings, or fully manual mode. There’s even an x.v.Color mode, and the option to increase or reduce microphone sensitivity a notch – a kind of poor man’s audio level control. But there are none of the widgets starting to appear on Sony and Panasonic camcorders to help improve the abilities of complete novices. So no face detection or shooting guides. 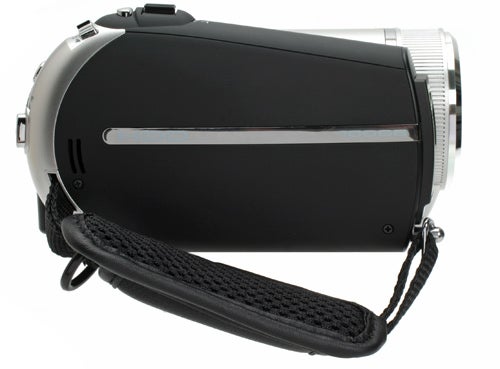 The Gigashot sports quite a large CMOS sensor, so we were hoping for decent results in our tests, and Toshiba did in general deliver the goods. In sunny conditions, colours were faithful and the high data rate meant there were few signs of compression artefacts. In an adequately lit living room, the Gigashot also provided good colour accuracy and little evidence of noise. So it’s more than up to shooting in the kind of conditions the domestic target audience is likely to require. 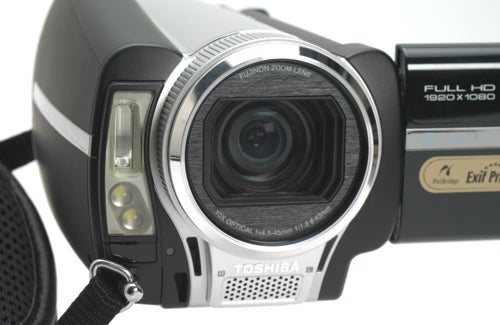 Only when we tried the A100FE in more challenging lighting conditions did it start to lose its grip on colour and detail, although the image remained relatively noise-free. Raising the gain does increase the brightness and colour of the image in low light, but at the expense of noticeable grain. Still, Canon’s HG10 has the edge in poorer illumination. 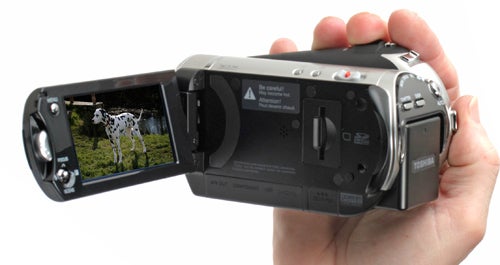 Being a hard disk-based camcorder, the Gigashot relies mainly on its USB connection for editing. Despite the HDMV video format, we had no trouble importing footage into Ulead’s VideoStudio 11 Plus. But Pinnacle Studio 11 Ultimate couldn’t open the files at any of the quality options, even with the very latest patch. So Toshiba’s choice not to use AVCHD doesn’t appear to have done it any favours. 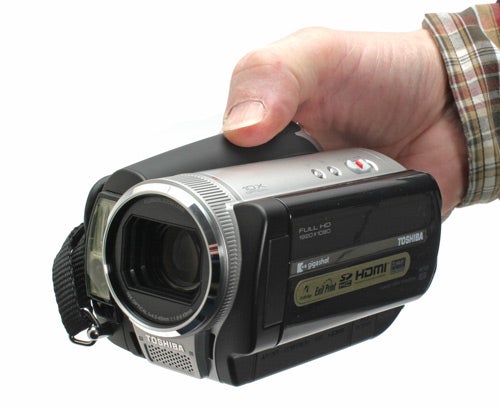 Otherwise, Toshiba has integrated proprietary ports with breakout cables for composite and S-video with stereo RCA audio, plus component analogue. There’s a port for HDMI, too, but this is the mini variety so will require an adapter for a regular HDTV cable, and none is supplied in the box.


Toshiba’s Gigashot A100FE 100GB makes a credible stab at a premium high definition camcorder. Its image quality is in the same league as Sony’s HDR-SR8 and Panasonic’s HDC-HS9. It’s very good value, too, undercutting Panasonic’s HDC-HS9 by nearly £100. However, the range of manual control available is very limited, and with Canon’s HF10 looming the Toshiba isn’t going to appeal to anyone beyond the novice videomaker.