Many tablets launched in 2011 failed to make the impact their makers hoped, but few made such limp entrances to the market as the first Toshiba Thrive 10in Android tablet. The reviews were lukewarm, sales were poor and few non gadget geeks even knew it existed. Toshiba has returned with its second 10in attempt, the Toshiba Excite X10. But can it outdo its predecessor or is it just as un-exciting?

One criticism of the 10in Toshiba Thrive was that it was chunkier than the most glamorous Android tablets. It had a full HDMI port, sure, but at 15mm thick it wasn’t exactly slim. Realising this flaw, Toshiba has gone the other way with the Excite X10. It is, according to Toshiba, the slimmest 10in tablet there is. At 7.7mm thick, it’s a full 1.1mm thinner than the iPad 2. It’s preposterously light too, at 558g. 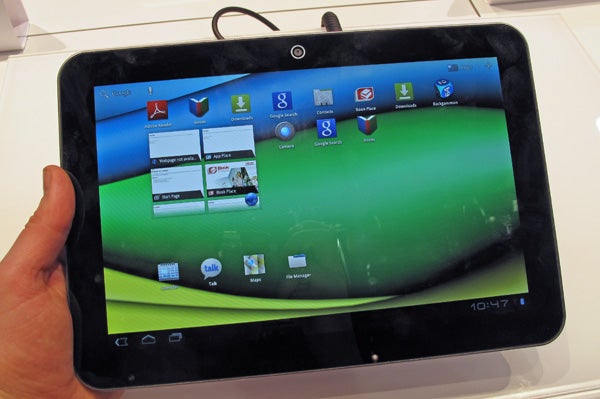 Being able to create such a light tab is partly down to the hybrid construction of magnesium and plastic – as well as glass for the capacitive touchscreen layer. The problem with using magnesium is that it feels just like plastic, lacking the cool touch of some other metals.

When matched with the slightly odd ribbed design of the Excite X10’s sides, we think Toshiba hasn’t created the most desirable tablet yet here. The brushed metal finish of the back is attractive enough, but it simply doesn’t feel quite as luxurious in-hand as Apple’s iPad 2.

However, build quality is very good – just because magnesium doesn’t quite feel high-end, doesn’t mean it isn’t – and connectivity is well above average. Along its edges you’ll find a microHDMI socket, a microUSB, a microSD card slot and a proprietary docking socket. A trio of micro connections may not command masses of space, but fitting them all into a 7.7mm frame is nevertheless impressive.

The big win for the tablet here is the memory card slot – high-end Android devices like the Samsung Galaxy Tab 10.1 are starting too lop-off expandable memory, and it’s a trend we don’t like. 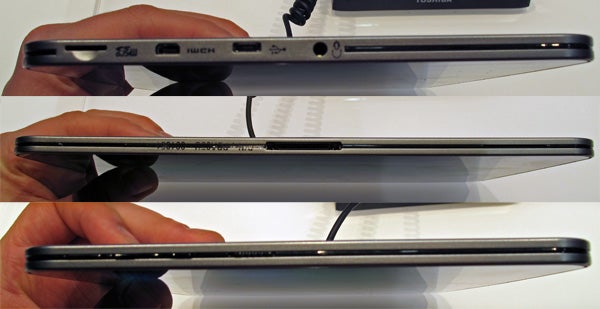 Under the tough Gorilla Glass screen layer sits a 10.1in 1,280 x 800 pixel IPS display. This uses the same RGB sub-pixel layout as all of our favourite top-end tablets, including the iPad 2. As ever with this screen type, colours are vivid, viewing angles excellent and contrast levels very good.

The two downsides at this point are that the glass top layer is highly reflective and that much-sharper 1080p Android tablets have already been unveiled, including Asus’s Eee Pad Transformer Prime HD and Acer’s Iconia A700. To appear a top-drawer tablet, the Toshiba Excite X10 should really have launched six months ago. 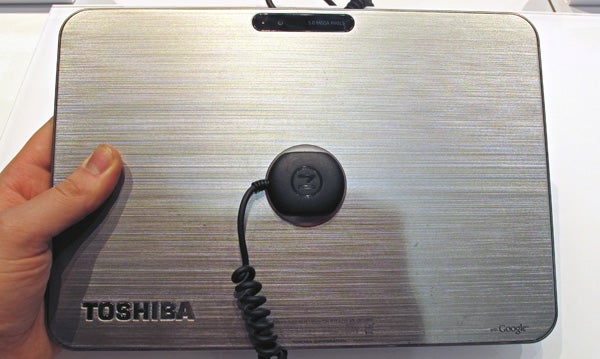 Performance during our hands-on session was up there with the best, though. Other than its slimness, an interesting feature of the Excite X10 is that it doesn’t use the Tegra 2 1GHz processor used in most other Honeycomb tabs. Instead, it has a 1.2GHz dual-core Texas Instruments OMAP processor.

Google has worked closely with Texas Instruments to get the processors working more happily on Ice Cream Sandwich than they do on Honeycomb – good news for the Excite X10 – but we found the 3.2 software currently on the tab ran perfectly. Virtually no lag whatsoever.

We’ll have to wait until we get out review unit to see whether this performance carries over to 3D games and high bit-rate video playback. Using the same PowerVR SGX540 GPU as brand-new Android devices like the Samsung Galaxy Nexus, we can’t imagine it’ll have any problems. 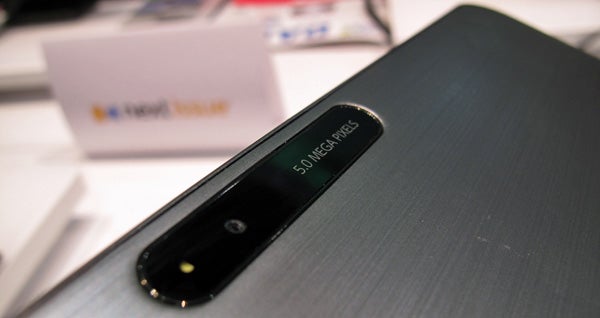 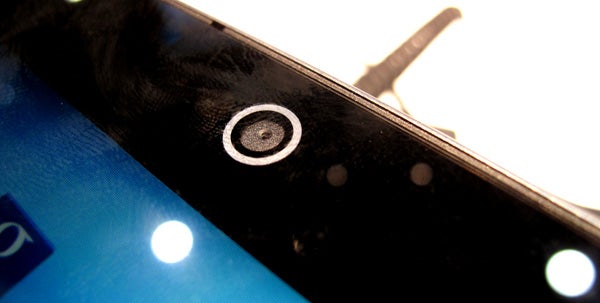 Cameras aren’t something we can test easily in a brief hands-on test, but the Toshiba Excite X10 comes up with the goods here too. There’s a 5-megapixel sensor on the back with an LED flash alongside, and 2-megapixel user-facing snapper. We’ll report back on whether they’re any good in our full review.

Toshiba’s Excite X10 remedies many of the problems of its predecessor the, Thrive 10, but we’re not convinced it has what it takes to succeed when the majority of Android tablets struggle commercially. Performance is good, build quality is decent and it’s light, but claims of superlative thinness ring hollow when other tabs are already painfully slim and the magnesium alloy finish doesn’t have that premium metallic feel some buyers are after.