Unlike the Kindle Fire HDX, where Amazon’s Android disguise was more plastic surgery than facelift, the Excite Write is very recognisably Android from the get-go. It runs Jellybean (Android version 4.2) out of the box, which means niceties like Google Now and an overall smoother UI are there out of the box. The only noticable addition Toshiba has made is to include a permanent screenshot button alongside the onscreen Android staple. Tapping this at anytime takes a grab of the current screen with the stylus tools for annotation. 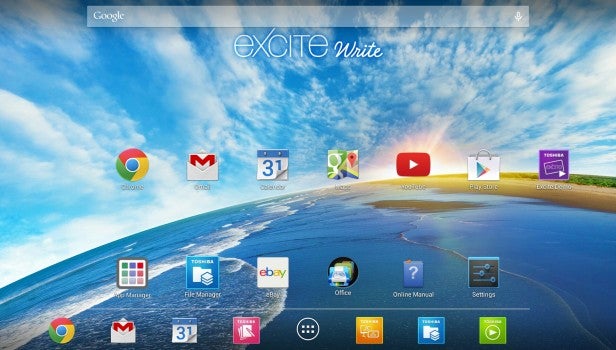 Toshiba has gone ahead and installed a fair few apps in advance — too many to go through here, but there are some that are automatically on the homescreens by default, so we’ll run through them quickly. In general they’re a mix of essential Google staples (Chrome, Gmail, Calendar, Maps, YouTube, Play Store) with a smattering of popular third-party ones such as Facebook, Twitter and Evernote. The latter (along with its stablemate Skitch) is particularly important, as it’s just the kind of app that compliments the stylus, with the ability to annotate and so forth.

And then there’s Toshiba’s own applications. The star of the show here is TruNote — an application that allows you to handwrite notes with the stylus, and it even has a search function for handwritten content, which we found to be surprisingly accurate, even with a deliberately haphazard scrawl.

TruCapture shows off the Excite Write tablet’s business credentials a little more: a neat little app that allows you to take snapshots of whiteboards and printouts from a number of angles for a digital record, that you can then go ahead and annotate on the device. A nice touch, though questionable how much more effective it is than a regular camera and a bit of elbow grease.

Toshiba Media Player is a reasonably versatile media centre that allows you to stream music, videos and pictures to nearby wireless speakers, TVs or computers. Toshiba File Manager does exactly what you’d expect, but as mundane as the task is, it manages to do it in a clear, user-friendly way. 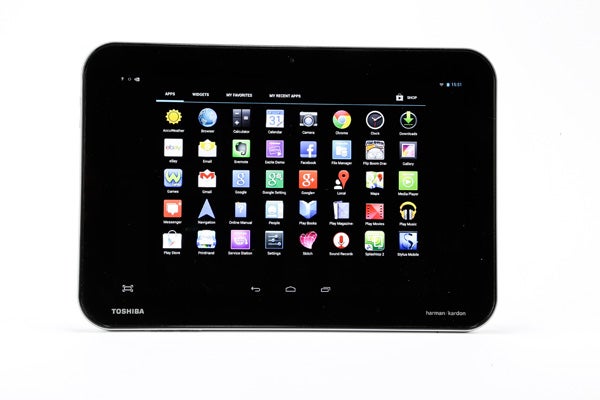 There’s a few more obscure third-party apps thrown into the mix as well. Under a folder labelled ‘office’ on the homescreen, there’s three apps: PrintHand (which lets you print from an impressive number of sources from Facebook to Google Drive), Splashtop (a remote desktop app) and ThinkFree, a simple word processing application. Finally, Flip Boom Draw is a simple, powerful sketching tool that supports layers and is pretty accurate with the stylus if you have the artistic ability to go with it, but there are plenty of options for budding artists on the Google Play store so it’s a nice if unessential extra.

The stylus (TruPen) that comes with the Excite Write matches the Note 10.1 by offering pressure sensitivity, although we found that to be harder to prove than on the Note range of smartphones and tablets. Writing on this, no matter how hard or gently we pressed, seemed to have the same thickness of ‘ink’ – this could be the fault of the app, but given this was a Toshiba writing tool specifically for the tablet, that would be a massive oversight on its part. 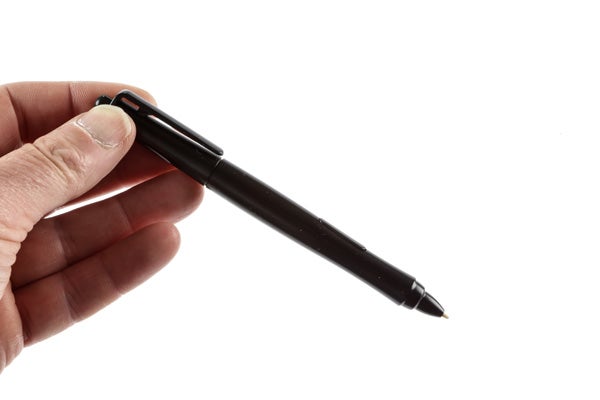 On the other hand it really does work well as a handwriting tool, and while we’re yet to find any technology that can match a real pen and paper feel (as they so often boast), this is certainly a good substitute, allowing neat flowing text and never adding unwanted extras to the page if your wrist comes into contact with the screen while writing.

Neatly, turning the pen upside down, and lightly pressing down on the screen will see it doubling up as an eraser, like on traditional school pencils. Impressively, the TruNote software was very good at translating our scribbles into digital text as well — the screenshot below was exported word for word into Gmail without any typos. 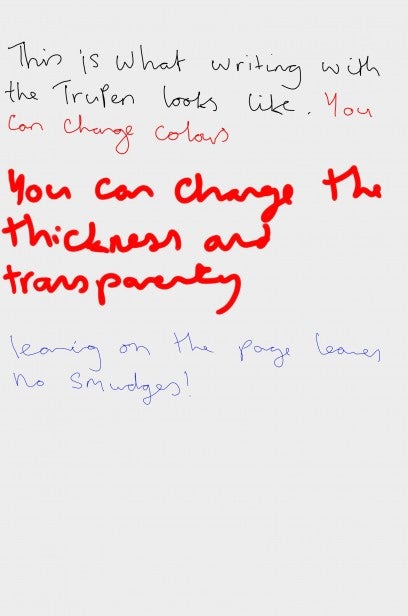 It’s pretty barebone, support wise, other than the handful of apps included, but fair enough: people don’t need to use a stylus all the time. Hidden away in the app drawer though is Stylus Mobile, which allows you to use the TruPen for text input everywhere in Android, and this is a decent alternative to the stock keyboard. Annoyingly though, there’s no dock to attach the stylus to when you’re on the move – not even with the keyboard cover — so you’ll just have to be sure not to lose it.