What is the Toshiba Excite Write?

The Toshiba Excite Write is a 10.1-inch Android based tablet at the higher end range of the spectrum. Packing a 2.8GHz quad-core CPU, 32GB storage and a 2,560 x 1,600 display, it certainly has the specs to impress, and like the Samsung Galaxy Note 10.1 tablet it comes with a pressure sensitive stylus. But does it have enough to make it stand out from the very crowded
tablet marketplace, and is it worth the extra cost at £450? Let’s find
out. 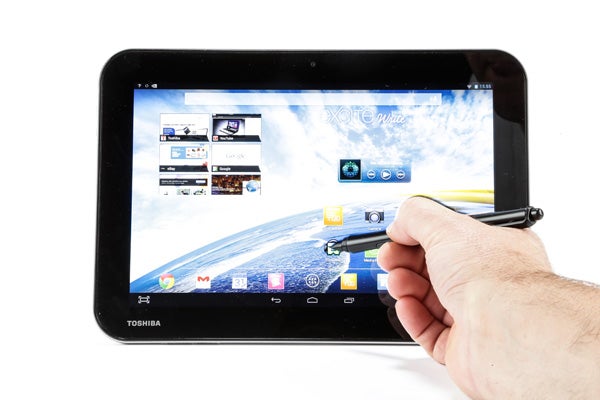 Since the very first iPad set the fashion for tablet design, there’s been very little dramatic variation, and the Excite Write tablet follows this trend. Face up, it’s completely black, with only the Toshiba and harman/kardon logo and a small front facing camera to show which side is the top. Unlike the iPad and Note 10.1, there are no physical face buttons, though it does have a dock with three permanently in a thin touch bar along the bottom of the screen when on.

The back cover of it takes a different direction, with a silver bumped finish, presumably to ensure you won’t drop it. It’s very minimalist here, although bafflingly the speakers are in exactly the position that your hands will cover if you hold the Excite Write in landscape mode. 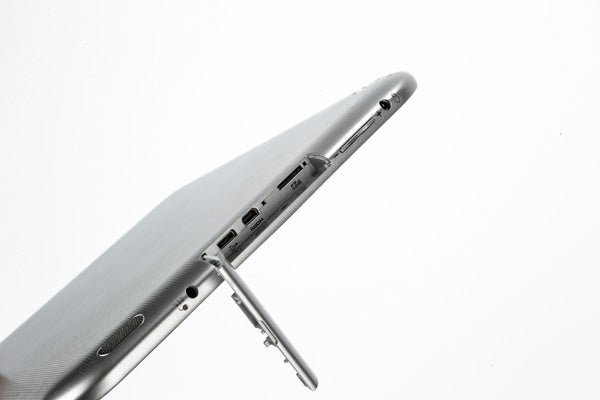 Underneath a flap on the side is an HDMI out, a microSD card slot a micro USB port. The latter works as a charger for the optional keyboard cover: a Bluetooth keyboard that snaps around the tablet turning it into a makeshift laptop. More on this later, but in terms of the design, it looks stylish even if it makes more a very top heavy hybrid.

It weighs in (without the keyboard) at 630g – exactly the same as the HP Slatebook x2. Not exactly heavy, but the iPad Air (479g) has moved the goalposts in terms of what we call easy on the arms in the tablet space now. At 10.5mm thick, it’s not horribly chunky but the iPad Air’s incredible 7.5mm thickness trumps it again.

The Excite Write features an IPS 2560 x 1600 display. That’s the same resolution that the updated Samsung Galaxy Note 10.1 tablet runs, a useful comparison given both make their included stylus a key selling point.

Considering the high resolution, the actual screen itself is a little disappointing. Up close, icons look a little fuzzy without the sharpness you’d expect, and the colours while bright also feel a touch washed out. The brightness is adequate, but there’s not much noticeable difference from halfway up the slider and the very max. This sums up the screen all over: adequate, but not outstanding. 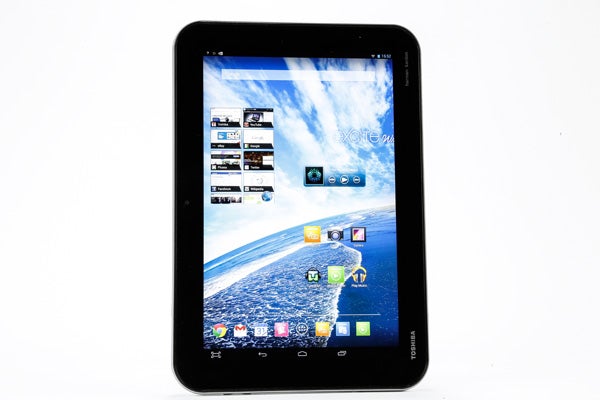 The viewing angles are good, though. This is far more important in a tablet than a laptop, and something which should be noted – although lights do have a tendency to reflect off of it. Reviewing the unit in late November, we weren’t able to get much bright natural light on it, but we imagine seeing things clearly on a bright summer’s day would be problematic.