So the design and screen look and feel a little below what you might expect of a £250 tablet. But you begin to claw back some value given the Encore runs a full version of Windows 8.1 and not the flop of an operating system, Windows 8 RT. This means you can actually install applications like Adobe Photoshop and Spotify to make up for the still disappointing showing in the Windows Store, and even plug the tablet into a large screen to use it like a desktop PC.

Consequently the Encore will feel familiar to anyone who has used any Windows 8 laptop or tablet. The core tablet apps like Skype, Xbox and Bing powered hubs for sport, weather and health are all here, as is the charm bar when you swipe inwards from the right side of the screen and the ability to have apps ‘snap’ to one side of the screen so you can browse the web and have a Skype conversation at the same time. 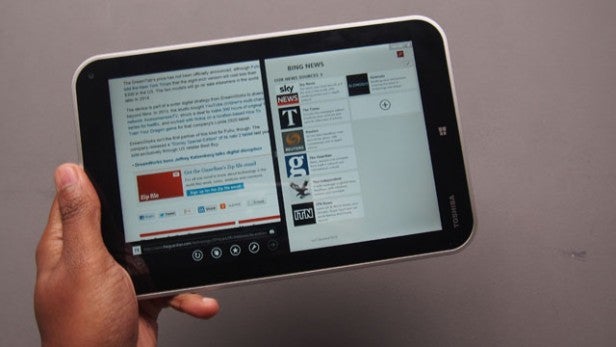 All this sounds promising and unlike most Windows 8 laptops and tablets, the Toshiba Encore comes with a full version of Microsoft Office Home and Student 2013. This makes it a potential desirable tablet if you are student and looking for something portable to carry around to lectures, especially as you can connect to a monitor, mouse and keyboard when you get home.

Indeed, this is a necessity really as using Office with the virtual keyboard and touchscreen controls on the tablet this size is very awkward — a Bluetooth keyboard is a must if you want to type on the move. This is the same in other desktop-based applications. You can run and use desktop apps on the move, but you probably won’t want to.

While Windows 8.1 works a treat on larger hybrids like the Asus Transformer Book T100, it’s a very different story on an 8-inch tablet like this. We’d add that Microsoft could do with making Windows easier to setup for first time users as there’s an awful lot of faffing about obtaining authorisation codes that means it takes longer than it ought to. 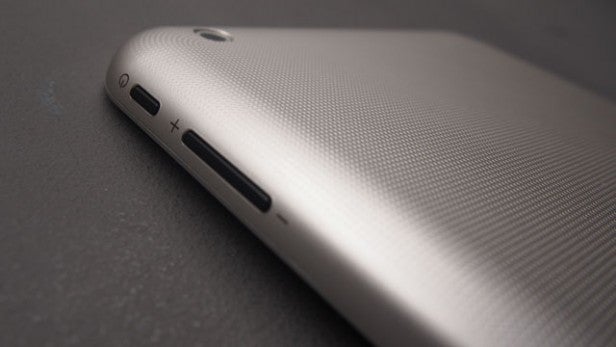 The Encore is powered by an Intel Atom Bay Trail, a quad-core chip clocked at 1.7GHz with 2GB of RAM to help. The Intel chips are designed specifically for Android and Windows tablets and hybrid devices to provide better performance and battery life than its Clover Trail predecessor, and to help keep the tablets prices low.

Bay Trail is a serious step forward for the Atom processor range and it copes fine with everyday use, but there are still times when it seems like it struggles. Swiping through the tiled interface is fluid enough and it handles snap to multitasking running YouTube and Rayman Fiesta Run on the same screen, but launching apps and web page loading times can be painfully slow at times — it even hangs on occasion.

Performance in games is mediocre, too. There’s some noticeable framerate drops in more demanding games that suggests that the GPU on board falls short of the GPUs in the best phones and tablets. In 3D Mark’s Ice Storm Extreme gaming benchmark it racks up a 14,024 score, putting it someway behind the Qualcomm Snapdragon 800 powered Nokia Lumia 2520 (16,123), although it outperforms the Microsoft Surface Pro 2 (13,557). It will handle much of what the Windows Store has to offer, it just won’t blow you away for speed and smoothness in every corner.

It’s also worth noting we’ve come across more than a few bugs in our time with the Encore, so much so we had to request a second sample and perform a complete refresh on one occasion due to the screen becoming totally unresponsive.