What is the Toshiba Encore?

The Toshiba Encore is a £250 8-inch tablet that runs on Microsoft’s Windows 8.1 Pro operating system, giving you access to Microsoft Office, the Windows Store and the more familiar Desktop version with Start button now reinstated.

Joining the Dell Venue Pro 8, the Acer Iconia W4 and Lenovo Miix2, the Encore runs on Intel’s Bay Atom processor, which means it’s capable of handling a the full version of Windows, not the RT version seen in the likes of the Surface 2. But having spent time with a buggy pre-production model earlier this year, and two review units, it’s clear Toshiba has still not ironed out all of its niggling issues. 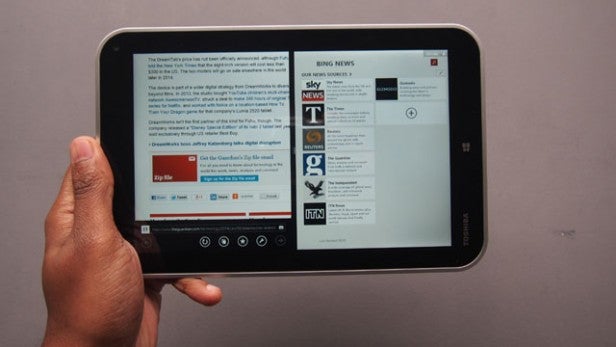 Bigger than the 7.9-inch iPad Mini 2 Retina and the 7-inch Nexus 7 2, the Encore is a pretty uninspiring thing to behold. Its predominantly plastic body lacks the same slim and sleek feel of Apple’s smaller tablet and lacks the more comfortable soft touch back of the Nexus. The Encore measures in at 10.68mm thick, so it’s not as slim as the
iPad mini 2 Retina (7.5mm) or the Nexus 7 2 (8.65mm) and at
450g it’s heavier than both, too.

A single capacitive Windows Home button sits alone below the screen to flip between desktop and tablet mod,  with stereo speakers situated on the bottom edge of the tablet. The volume rocker and on/off button sit on the right edge of the device. and up top is a micro HDMI, micro USB port and headphone/mic jack. Over on the left, there’s a Micro SD card slot to expand storage beyond the 32GB on board.

The dimpled grey plastic back houses the 8-megapixel camera and to make the most of Microsoft’s Skype integration, Toshiba has also included a ‘Skype certified’ 2-megapixel front-facing web camera with dual mics to help audio in video calls to come out nice and clear.

Despite its size, the Encore’s chunkiness makes it a little uncomfortable to hold in one hand in
portrait mode — it’s much better in two hands. In
landscape mode, meanwhile, it’s all too easy to hit the on/off button instead of
the volume rocker as well. Both these facts make the Toshiba Encore a cumbersome tablet, which it really shouldn’t be given its size. It feels sturdy and well-made, but it’s not that nice to handle. 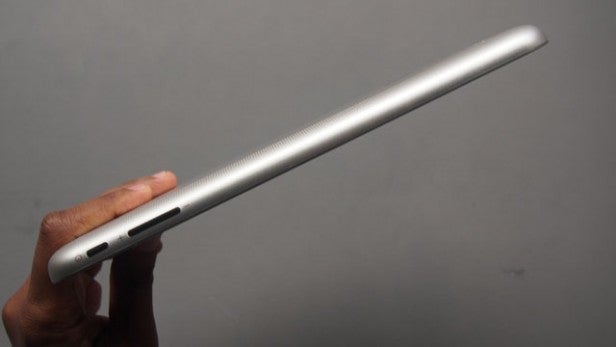 The Encore features a reasonably bright 1,280 x 800 LED display, effectively matching the original Nexus 7 and the Dell Venue 8 Pro (full review coming soon) for resolution and detail. This is fairly underwhelming in comparison to the second generation Nexus 7 and Kindle Fire HDX 7, both of which feature 1,920 x 1,200 IPS displays. Both are cheaper, though smaller screen tablets, but for an extra £50 it’s not unreasonable to expect a little more.

Still, it’s acceptable for reading web pages and video streaming. Video is sharp and viewing angles are decent, but it lacks the vibrancy, colour accuracy and ability to capture more natural tones the way similarly priced tablets are able to. The 189ppi pixel density means you shouldn’t expect exceptional clarity, either. It’s suitable for the tiled, tablet-optimized user interface and reading web pages, but the desktop mode isn’t quite so forgiving.

But the real problem with the Toshiba Encore’s screen if its responsiveness, or lack thereof. At times just selecting apps or trying to skip back a web page proves problematic. Even the lock screen struggles to register screen presses at times. It’s a tablet that will test your patience and by this point our patience was already running thin.