DisplayLink is a popular technology at TrustedReviews. For those that don’t recall, it’s that nifty tech which allows you to drive a monitor from just a humble USB port, opening a world of simple, multi-monitor productivity to devices (specifically laptops) that would otherwise miss out. Another product segment that’s benefited is the humble docking station, making it possible to get networking, audio and display data – not to mention peripherals – all travelling down one cable. 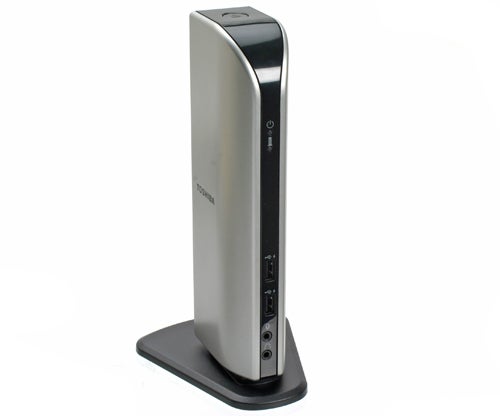 Our first taste of such liberating convenience was the original Toshiba Dynadock that we reviewed last year. It was a very promising product back then, but one that wasn’t without some problems. It’s now been updated, though, adding a new iteration of DisplayLink’s tech and with it support for 1,920 x 1,200 resolution displays. Given the popularity of 24in displays and increasing adoption of ‘Full HD’ 22in monitors, it’s an important addition.


There are one or two other changes, too. Toshiba no longer sells separate DVI and VGA versions, combining the two into one unit, but has done away with the legacy Serial port as a consequence. As consequences go it’s a very palatable one! Not that you can use both at the same time; that’s as yet beyond DisplayLink’s technology. However you can still effectively enjoy a triple display experience from one laptop: one monitor connected to the Dynadock, one to the laptop and the laptop’s own display being the third. 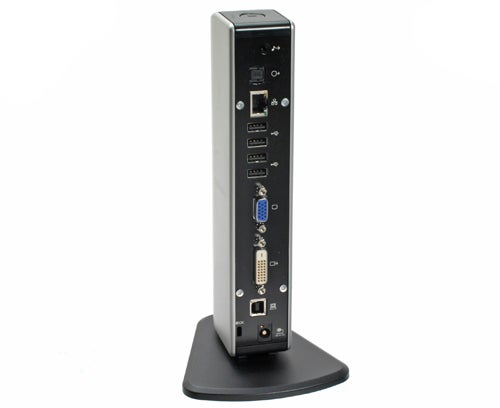 This is a nifty trick to pull, but chances are most people will simply use the Dynadock to add docking capabilities to a laptop that doesn’t have its own propriety dock connection. Given more and more people are choosing to use laptops instead of desktops, it’s a fair bet plenty of people are in just such a situation.


The Dynadock U10 is compact and discreet. It sits vertically on a detachable base, standing just shy of 25cm tall and weighs 490g. Despite its relative slightness it feels pretty well made, while the gun-metal grey and gloss black finishes give it an understated, unobtrusive appearance. 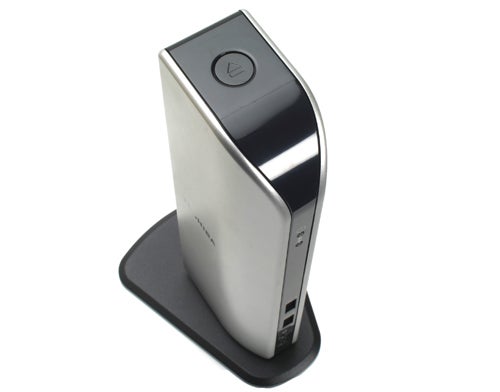 Connectivity is extensive, comprising six USB ports (4x rear, 2x front), DVI and VGA, optical audio and stereo jack outputs, a 10/100 Ethernet port and the upstream USB port for connecting your laptop. There are also headphone and microphone jacks on the front, while the two front-mounted USB ports will charge connected devices even when the dock isn’t active. One final notable feature is the button at the top of the station that undocks your laptop at a single press.

Drivers for Windows XP and Windows Vista are provided on a disk in the box, but you’re better off downloading the latest drivers from the website if possible. A beta Windows 7 driver is also available, which we can confirm works just fine – albeit with very occasional and minor quirks.


You need to install the software before connecting the dock for the first time. When you do connect the dock it’ll install the device drivers for video, audio and networking, a process made slightly disconcerting by the display occasionally blanking out and it not always being obvious what exactly is going on. Still, disconcerting or not, everything worked fine after a restart and the whole process (including assembly and cable routing) takes around 10 minutes from start to finish. 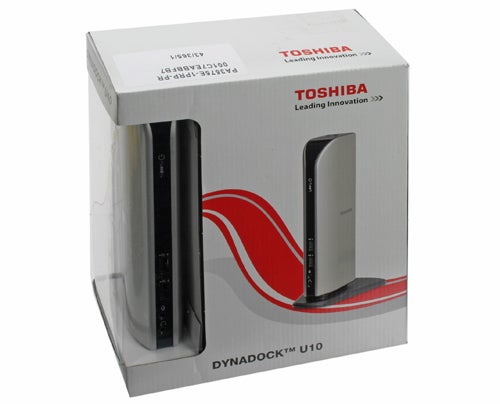 Once installed the Dynadock U10 works very smoothly. It’ll only kick-in once Windows has booted and loaded the device drivers, so you can’t use your keyboard to enter the BIOS, but the basics of the Dynadock work flawlessly. One minor gripe is the lack of Gigabit Ethernet, with just 10/100 ‘Fast’ Ethernet on offer, but chances are you’ll stick to using your laptop’s Wi-Fi connection anyway.


Of greater concern is the video performance and it’s where the Dynadock does fall down just a little bit. It’s great to see the resolution support has increased to 1,920 x 1,200, but the video output from the Dynadock is still left wanting somewhat. Moving windows around is just a little bit laggy, something that’s most noticeable in Vista and Windows 7 where the effects are more advanced than XP. This is annoying but largely harmless when performing productivity tasks, but quickly becomes more of an issue with multimedia. 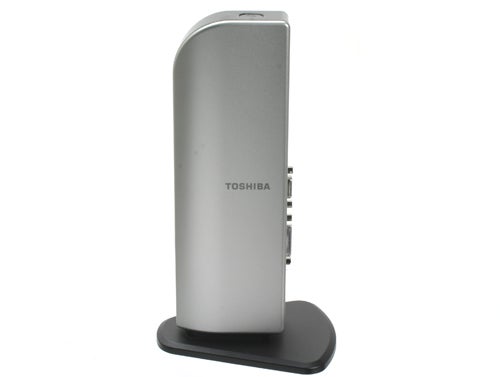 Standard definition video plays okay, but anything high-definition (720p upwards) is still produced with noticeable jitter and 1080p video isn’t at all watchable. Perhaps acknowledging this weakness there’s a mysteriously undocumented ‘Video Mode’ that can be activated, but it doesn’t appear to have an effect – not a measurable one, anyway.


This is disappointing as we’d like nothing better than the Dynadock to be a one-stop shop for all your needs, but ultimately the compression and decompression of the video signal required to make DisplayLink work is the limiting factor. Until the next generation of USB comes along to provide more bandwidth, thus requiring less or perhaps no compression, it’s an unavoidable facet of the technology.


As a way of converting your regular, consumer laptop into a home workstation, the Dynadock U10 is a cracking product. However it is one with limitations you have to work round. If you intend to use it as it was intended, for working, it’s just fine, but its less than perfectly smooth video performance precludes it from the award it otherwise deserves.