The first portable video cameras were so big they needed two people to carry them around. But camcorders have been getting smaller every year, and Toshiba is claiming yet another record with the Camileo S20. At just 17mm thick, this is the thinnest Full HD camcorder currently on the market, making even Sony’s HDR-TG7VE look like a porker.


The S20 weighs just 115g without the battery, and it’s small enough to fit into a jacket, trouser or even shirt pocket without causing an unsightly bulge. You can purchase it in no less than eight different colours, including ivory white, blue, chocolate brown, orange, pink, ruby red, silver, and black. So there’s sure to be a version to suit your outfit.


The sensor is a 5-megapixel CMOS, but Toshiba doesn’t divulge its dimensions, and the optics are fixed. There is a macro switch on the top of the device, which works in the same way as with other fixed-lens camcorders such as JVC’s PICSIO GC-FM1, moving the lens so close objects are in focus. Toshiba throws a hefty dollop of interpolation at the sensor to provide 16-megapixel still images. However, the resulting images lack the detail you would expect for their resolution. 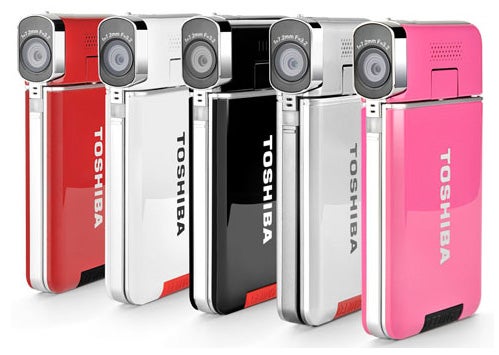 The S20 records H.264 video, with four different quality options. Three operate at 30 frames/sec, including 1080p Full HD, 720p, and VGA. A further mode runs at 60 frames/sec with a curious resolution of 848 x 480. There is a small amount of memory built in, but with just 96MB free it’s really only sufficient to check the camcorder is working. So you will need to invest in some SDHC media to get shooting. A 4GB card will be enough for around an hour of footage at the top Full HD setting.


The range of controls is greater than with pocket Internet camcorders, but not by much. There are separate buttons to switch video quality, turn on the built-in video light, and toggle between camera and camcorder modes. A final button turns on the Pre-REC buffering function, which spools video constantly, then adds it onto the beginning of a shot when you press record, reducing your chance of missing something. 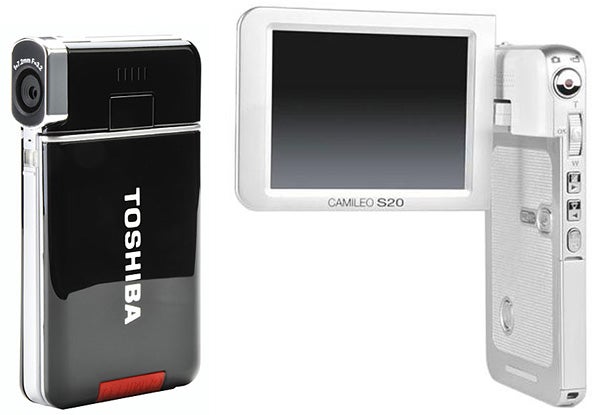 Everything else goes through the jog dial. There are white balance presets for daylight plus fluorescent and tungsten artificial lighting, but there’s no manual option. The scene mode section includes a selection of digital effects alongside a soft skin mode, night mode and backlight compensation.


But there aren’t any options to change shutter speed, iris, or focusing, and no more advanced scene modes. As we mentioned earlier, the lens is fixed, so there is no optical zoom available. There is a 4x digital zoom available, but even that only works when you’re not in 1080p mode, presumably because it requires surplus pixels on the sensor which aren’t available at this resolution. For similar reasons, the digital image stabilisation doesn’t work at 1080p, only when shooting at lower resolutions.

Toshiba has provided some more fun-oriented facilities. There’s a motion sensing setting, which triggers recording when there’s action in the frame. The time lapse mode records a frame every 1, 3 or 5 seconds. There’s also a slow motion option which grabs video at four times the normal speed but at a lowly 320 x 240 resolution.


The S20’s box is full of extras. Alongside a handy protective pouch, there’s a little screw-fit tripod with flexible legs. The analogue AV cable only provides composite video and mono RCA audio, but there’s a mini HDMI port if you want to watch your video in all its HD glory. Toshiba even includes a converter cable with full-sized HDMI on the other end so you can plug directly into your HDTV.

If you want to edit footage from the S20, it’s recorded as AVIs and we found these compatible with all the software we tried. However, being H.264 performance is extremely slow, making editing a relatively laborious process with the 1080p footage. Toshiba supplies Video deluxe 15 Plus and Movie Edit Pro 15 Plus, both from MAGIX, in the box, but they’re just trial versions.


The S20 follows the trend of the last couple of years and provides built-in Internet connectivity. As soon as you plug the device into a PC via USB, you will be prompted to install the H.264 codec from the S20’s onboard memory, if it isn’t on your system already. The YouTube Direct software will then start up straight from device as well. However, its features are extremely limited, offering just the ability to input and save your YouTube login, and then upload your video as a public or private clip. You can’t even provide a YouTube category or tagging information. 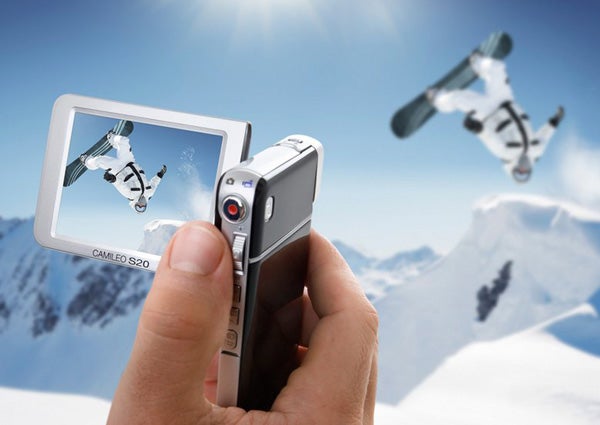 What really lets the S20 down, however, is its image quality. In good lighting, colours are vibrant enough, and detail reasonable. However, there are issues with contrast, with bright areas often blown out. Low light is unsurprisingly this camcorder’s Achilles’ Heel, as with most low-cost models. Although the S20 can achieve a reasonably bright image in poor illumination, with a fair amount of colour preserved, the automatic exposure often fails completely to set itself correctly, creating a completely dark image.


Fortunately, the video light is reasonably bright for the S20’s size, and provides a handy boost at ranges up to a couple of metres. The Night mode also brightens the image, but accentuates the grain as well. Overall, though, the S20 does not do well under modest artificial lighting conditions, which is unfortunately a key environment for a camcorder aimed at the impromptu capturing of social events.


The Toshiba Camileo S20 is certainly a great-looking camcorder, and you’re likely to receive admiring glances after pulling it out of your pocket (unless you chose the pink version…). At around £150, it’s very reasonably priced, too, and this includes some worthwhile extras in the box such as the HDMI cable and tripod. However, image quality is behind pocket Internet camcorders such as the Flip Video Ultra HD and Creative Vado HD in low light. So whilst it’s good value, the Camileo S20 only offers the video capabilities you would expect at this price.