If your videomaking desires are modest, even an entry-level conventional camcorder could be more than you wish to spend, as this will still set you back between £200 and £300. Toshiba has been targeting this section of the camcorder market for some years now with models priced well below this, and the Camileo P100 is its latest keenly priced option. Where the Toshiba Camileo B10 used the increasingly popular “candybar” format, this model has a pistol grip, which has a few benefits. 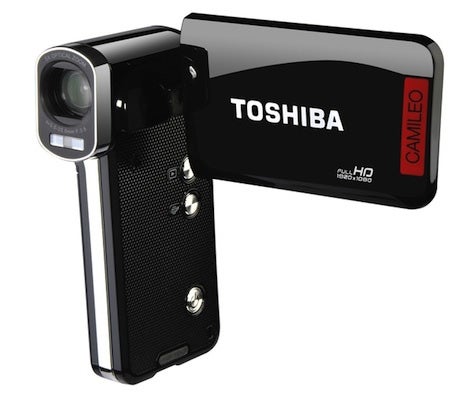 Primary amongst these is that it allows greater space between the lens and sensor, so there is room for an optical zoom mechanism. This is only 5x, but candybar camcorders only offer digital zooms, which impair image quality. The CMOS has an 8Mpixel resolution, which is more than enough for Full HD, and Toshiba has harnessed some of the extra pixels to offer an 8x Advanced Zoom. This crops into the picture like a conventional digital zoom but uses the extra pixels on the sensor to ensure it doesn’t reduce resolution (though low light performance will still decrease slightly). There is also a 16x digital zoom available on top of this. You can’t turn it off, but at least the zoom pauses at the point where optical and Advanced zooms end and the digital portion begins, so you can choose not to use it.

The P100 offers a range of shooting modes. Topmost amongst these is Full HD video at 30 frames per second, but 720p at 30 and 60 frames per second is available too, alongside VGA at 30 frames per second. All of these are captured as H.264-based MP4s. It’s also possible to grab still images at up to 16Mpixels, although this clearly involves considerable interpolation as it’s twice the CMOS resolution. There’s a modest 128MB of Flash memory on board, enough for under two minutes of footage at the top data rate. So the SDXC-compatible memory card slot will be required, providing 14 minutes of storage per gigabyte.

Another area where the P100 beats most candybar alternatives, except Toshiba’s own, is in features. These are accessed via the 3in touch-screen LCD. A single tap brings up a quick menu, which provides rapid access to toggling the electronic image stabilisation, advanced zoom, shooting format, and video light. The latter actually has two settings. One turns on the buit-in LED lighting, and the other what Toshiba calls “digital light”, which is essentially a gain-boosting night mode.

The remaining settings can only be accessed via the full menu, which is a little unintuitive. It’s entirely icon driven, and it isn’t always obvious what each icon stands for. However, there are quite a few options available here. Alongside duplicated controls for the video light, resolution and image stabilisation, the motion detection feature grabs video at the chosen quality setting when something moves within the frame – ideal for secret nature videos or spying on your friends.

There’s a slow motion setting, which records at high speed but lower resolution and then plays back at 30 frames per second, so the action looks slower. There’s a time lapse function, which can grab frames at one, three or five-second intervals, giving you the chance to watch grass grow at an acceptable pace. Pre-REC continually buffers a few seconds of video to memory, and adds this to the beginning of your shot. This means you capture the action just before you press record as well, preventing you from missing an important event. 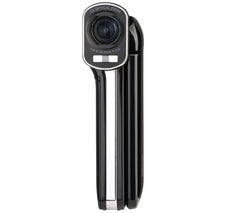 There’s an effects section, which includes the macro mode and white balance configuration. The latter offers presets for daylight, fluorescent and tungsten lighting alongside fully automatic, but no manual mode. The scene section provides a soft skin option, night mode, and rather annoyingly the backlight compensation function can be found here, where it’s so buried you are unlikely to use it as often as you might like to. A small selection of digital filters is also available, which includes black and white, sepia tone and negative.

Aside from the USB socket, used for charging as well as data connectivity, there’s a mini HDMI socket as well. However, no analogue output is provided, so it’s HDMI or nothing. But at least, unlike most manufacturers, there’s a cable included so you can hook up to a TV’s full-sized HDMI connection straight away. In fact, the accessory bundle isn’t bad, with a durable protective pouch included and AC power adapter with European and UK plug options. Toshiba has even provided a mini tripod in the box, with flexible legs for custom camcorder positioning.

So the Camileo P100 has a lot going for it, but unfortunately there is one important area which lets the side down somewhat – video quality. In good lighting, footage is quite vibrant, but colours are too brightly saturated. There’s also a lack of detail when frames are examined up close. This is almost certainly due in large part to the level of compression. The top data rate equates to under 10Mbits/sec, where most AVCHD camcorders offer a maximum of 17 or even 24Mbits/sec. 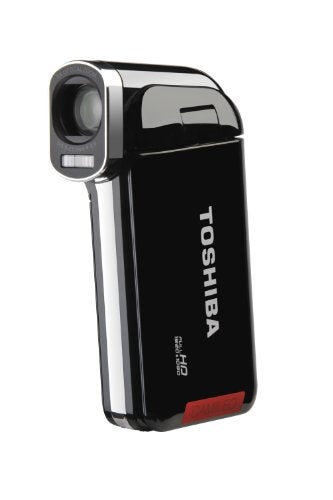 Performance in low light is similarly unimpressive. Although the image is reasonably bright, particularly if the digital light mode is engaged, there’s a lot of grain visible. The white balance is also quite inaccurate. A few years ago, this would have been acceptable, but lots of pocket Internet camcorders around the same price as the P100 now provide much better results, even if they do have fewer creative settings.

The Toshiba Camileo P100 is reasonably priced at £115, and it offers quite a few more features than most pocket Internet models. The optical zoom is also something the latter camcorder format never offers. However, image quality is somewhat inferior, particularly in low light. So although there’s a reasonable amount here for the money, there are better choices if merely pointing and shooting are your intention.