Although most of Toshiba’s consumer electronics products aim for the higher end of their respective markets, its camcorders tend to be distinctly value oriented. The Camileo H30 doesn’t break the mould, with its sub-£200 price, but it does offer a few features not normally associated with camcorders this cheap.


For a start, it shoots Full HD, although Toshiba already offers this for even less with its Camileo S20. But where the S20 only provides a quality-reducing digital zoom, the H30 sports a fully fledged optical version, although the factor is a mere 5x, where most more expensive camcorders boast at least twice as much. Nevertheless, compared to similarly priced pocket Internet camcorders such as the Flip Video UltraHD, a real optical zoom of any nature is to be commended. If you’re shooting at resolutions below Full HD, there’s also a 4x digital zoom available as well, for a 20x total.


The H30 is built around a 10-megapixel CMOS sensor – twice the resolution of the S20’s, although as with the latter Toshiba hasn’t publicised the physical size of this sensor. A modicum of interpolation is added to bring the still image resolution up to 16-megapixels. There’s a small flash built into the H30 to help with photography, but unlike the S20 no LED video light is provided. 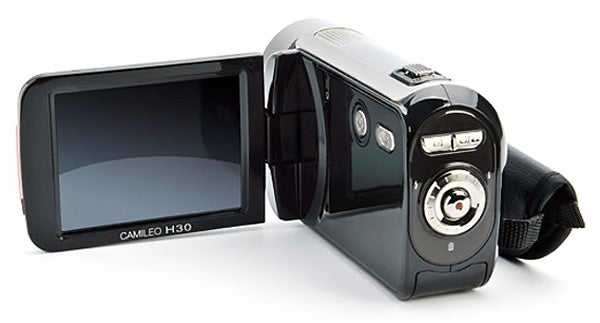 Video resolutions range from VGA up to the aforementioned Full HD. In between, there’s 720p and a curious 848 x 480 option called WVGA. This provides a 16:9 widescreen aspect but with the same vertical resolution as VGA. It also records at 60 frames/sec whilst the other modes use 30 frames/sec. Video is stored on flash memory, but the H30 includes just 128MB on board, of which only about 96MB is usable, so SDHC media is a necessity. At the top Full HD quality setting, a 4GB card will be enough for around one hour of video.


The H30 isn’t exactly packed with camcorder features. Discrete function buttons are few and far between. A Pre REC control can be found under the LCD, which also doubles as a web upload button, for one-touch YouTube video distribution. The jog dial on the rear also incorporates a trio of functions activated when you press strategic points around its edge. Top left toggles the Digital Light system, which brightens the image artificially using post processing rather than actual physical illumination. Top right toggles the onscreen data, whilst pressing along the bottom deletes the last clip or all clips from the currently selected recording media.

Unusually for a camcorder at this price, the LCD is actually a touchscreen. But this only operates the menu. Toshiba hasn’t harnessed it for any one-press focus or exposure functions. In fact, there is no direct manual control over the latter settings at all, nor shutter speed. There is a scene mode menu available, but this doesn’t include the usual portrait and sports options. Instead, Toshiba has rounded up a soft skin setting, alongside a night mode and backlight compensation.

There are also digital effects for black and white, negative, and classic sepia tone. You can only select one of these scene settings at a time, though, so there will be no black and white footage with backlight compensation and soft skin. Presets for white balance are also available, with two indoor options and one outdoor, alongside fully automatic. But you can’t set white levels manually.


Strangely, there’s also an Effect menu that doesn’t contain digital effects. This is where you toggle image stabilisation and a variety of special shooting modes. Like the Camileo S20, you can only use image stabilisation at resolutions below Full HD, presumably because – like the digital zoom – it uses the extra available pixels when not all the CMOS is being utilised. It’s not the most effective system, either. 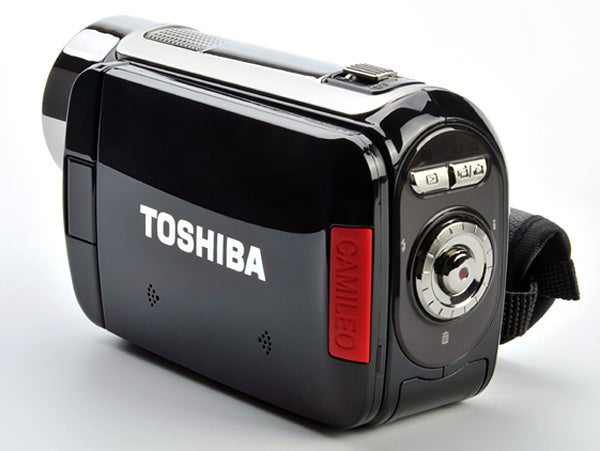 Macro mode is enabled using software rather than a physical switch on the camcorder body, and this can be found within the Effect menu too. The remaining options include a motion detection system, which triggers recording when sufficient action is sensed within the frame, and a slow motion system, which records at 120 frames per second but with a resolution of just 320 x 240 pixels. The final option is time lapse, which records a frame every 1, 3 or 5 seconds, so you can watch grass grow or paint drying without getting quite so bored. 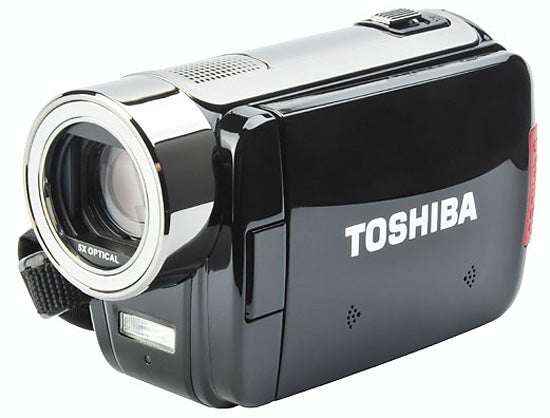 Not surprisingly, there’s no accessory shoe nor mini-jacks for an external microphone or headphones. A side flap houses a mini-jack for outputting composite analogue video and stereo RCA audio, mini-USB, and a mini-HDMI socket. Underneath a flap on the bottom is the SD slot, positioned alongside the compartment for the removable battery. You also get a small selection of extras in the box, which is another surprise considering the H30’s price. In particular, Toshiba bundles a cable so you can hook up the H30’s mini-HDMI to the full-sized HDMI found on an HDTV. There’s also a little pouch to keep the camcorder in.

In sunny outdoor conditions, the H30 shoots decent enough video. Colour fidelity is good, and there is sufficient detail, although compression is relatively aggressive so there is some softness to the picture. However, performance in low light lets the side down. The picture becomes dark and grainy more quickly than most Full HD camcorders as illumination drops. You can improve things noticeably using the Digital Light mode and Night scene setting. However, low light image quality is still significantly behind our favourite low-cost Full HD models, such as Sony’s Handycam HDR-CX105E and JVC’s Everio GZ-HD300, even if these are considerably more expensive. 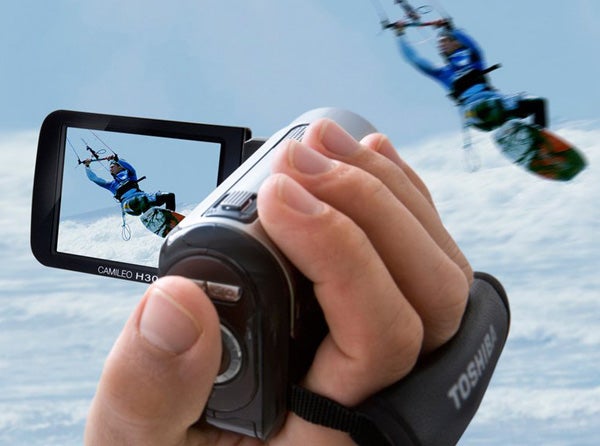 
It would be churlish to be too critical of any camcorder shooting Full HD for £180, and the Toshiba Camileo H30 does offer some impressive features for its price. In particular, you will be hard pressed to find another camcorder at this price with an optical zoom as well. However, the H30’s poor low light shooting will make it far from ideal for capturing social gatherings in badly lit indoor locations, which is frequently the issue with low-cost camcorders. So whilst it still offers plenty for your money, a key capability is missing for the target audience.