Toshiba is not a name you would immediately associate with camcorders – more notebooks, TVs and disc players. But the company is quietly chiselling itself a niche as a purveyor of cheap high definition video cameras as well, such as the Camileo Pro HD. Latest to join the range is the Camileo H10. Available for under £150, yet able to shoot 720p video, the H10 sounds like an absolute bargain.


Of course, at this price, corners have been cut. For a start, the device comes with just 64MB of memory built in, which is enough to test things are working and very little else. So you will need to factor in an SD card from the outset, although that’s hardly a major expense these days. The H10 has four different recording options. The headline act is HD, although this is 1,280 x 720, not Full HD. There is also a D1 option that operates at 720 x 480, plus VGA at 640 x 480, and QVGA at 320 x 240 to choose from. All run at 30 frames per second, however, rather than the European-friendly 25 frames per second.


At its top setting, the H10 uses a 4Mbits/sec data rate, which isn’t particularly high, even for 720p resolution instead of Full HD. So a 2GB SD card will be enough for a little over an hour of video. Considering 2GB cards can be had for little more than a quid these days, we wonder why Toshiba didn’t just bung one in the box for good measure. 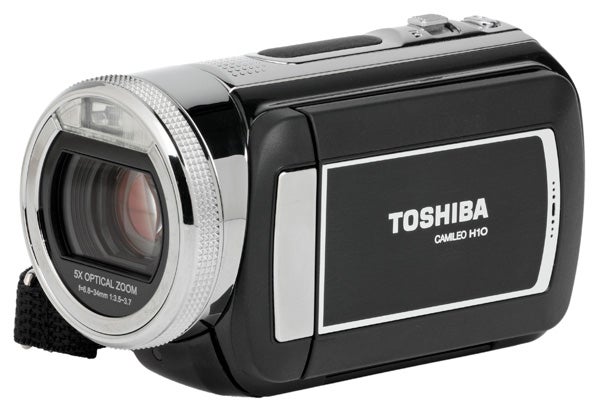 The fact that the H10 only offers 720p video is also somewhat strange when you look at its specifications (probably a limitation of the electronics more than anything else). For instance, the sensor has a 10.48-megapixel resolution, more than enough for Full HD, although Toshiba hasn’t made it clear how big this CCD is. The main beneficiary of all these pixels is, as always, digital photography. If you want to stick within the native resolution, Standard still image mode offers a resolution of 3,648 x 2,736. But you can also add interpolation to bump this up to High, which captures at 4,608 x 3,456.

There is a fairly modest 5x optical zoom available, with 4x digital zoom on top – but we found this made images very fuzzy indeed. Normally, we would suggest turning off digital zoom, but there is no option to do this on the H10. At least zooming stops when it reaches the extent of optical power, so you can choose not to use digital zooming in each instance.


The majority of settings are accessed via the central button on the back. But ranged around this are specific controls for changing the shooting resolution, toggling through the flash modes, turning the self-timer off and on, and enabling the Intelligent Lighting setting.


Returning to the central button, this calls up the Options menu, which converts the four buttons into navigational controls. Within this menu, you can enable macro mode, which allows focusing up to 1cm away. There are seven exposure settings, ranging between + and -1EV, but no manual shutter configuration. You can also vary between nine levels of sharpness. White balance options include presets for daylight, fluorescent and tungsten, alongside fully automatic, but there is no manual setting. A night mode is also available. 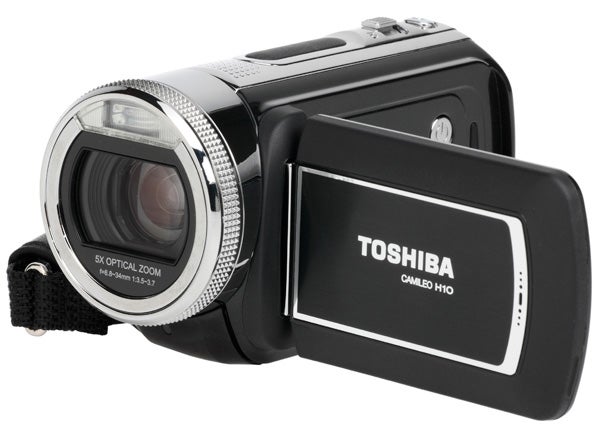 A few more options are included in the photo menu. Strangely, backlight compensation is only available for still images, not video. You can also choose a 5-picture continuous shooting mode, and ‘Two in One’, which combines two shots into one single image, although we’re not entirely sure why you would want to do that in camera.


In either mode, there are three digital effects available, including black and white, classic, and negative. There is also a Motion Detect setting. Turn this on, and the camera will record video when it detects motion, although the external power supply will be required to use this for any length of time.


In general, we found the H10 reasonably comfortable to shoot with. However, the placement of the record button to one side initially means you are likely to press the Options button instead, as that is where your thumb more naturally sits.

Considering the bargain price, we weren’t expecting particularly amazing video performance from the H10. Despite the HD resolution, video quality can’t hold a candle to the top Full HD models from the likes of Canon, Panasonic, Sony, JVC and Samsung. In adequate lighting, colour fidelity could only be described as acceptable. Some reds had a tendency to wash out and veer towards orange. The aggressive compression also smoothed out detail too much and light areas blew out, losing detail entirely.


We found the H10 had problems focusing in lower light, too. This was a shame because colour performance was generally quite good and the level of grain not excessive. Overall, the H10 performs above the level of a compact digital camera pressed into service to shoot video and definitely ahead of a mobile phone. But it’s not even close to the same league as premium HD camcorders.


Unfortunately, despite the H10’s comparatively high sensor resolution, it didn’t particularly prove itself as a digital camera either. Colour fidelity was good, but the overall picture looked very fuzzy. This wasn’t helped by the necessity of pushing down quite hard on the photo button to take a photo, making it difficult to keep the camera steady.

Video is recorded as AVIs using H.264 MPEG-4 compression. We found this a little problematic for editing software. Corel VideoStudio Pro X2 was able to import the files but was extremely sluggish editing them. Premiere Elements 7 also imported the footage and after some hesitation was quite fluid editing it but with occasional stalls. CyberLink PowerDirector 7 imported the files but then crashed when we tried to play them on the timeline. So overall we can’t give many plaudits for the H10’s compatibility with mainstream video editing apps.


Despite its low price, the Camileo H10 still has HDMI built in, although this is a mini socket so requires an adapter to connect to a TV. Amazingly, Toshiba actually includes an adapter cable in the box. It’s only 1.2m long, but that should be enough for HDTV hook-up. You even get a remote control, for leisurely lounge control. For analogue TVs, a minijack is incorporated with a breakout cable for composite video and mono audio.


When a camcorder offers HD shooting at this kind of price, it’s hard to be too critical. After all, 2008’s top selling camcorder, the JVC Everio GZ-MG330, is more expensive for just standard definition, and the Panasonic SDR-S7 costs about the same, and that’s standard definition too. The Toshiba also gets extra brownie points for including an HDMI cable. But the video performance is not significantly better than the standard def alternatives, and editing the results is much more of a pain. So, whilst the Toshiba Camileo H10 is still good value, videomakers on a tight budget would still be better off forgoing the HD nametag for something a little more practical.