Toshiba’s latest Blu-ray range caters for two different types of people – those who want 3D Blu-ray playback and those who don’t. If you’re one of the former, check out the BDX3200, a basic but likeable player that at around £150 costs considerably less than many of its big-name rivals. But if you couldn’t give a hoot about 3D then the BDX1200 is the player for you, costing about £45 less than the BDX3200.

The BDX1200 features the same attractive external design as its sibling, with slinky bodywork, a gloss-black fascia and shimmering silver strip running along the top. As noted about the Toshiba BDX3200, the player is light as a feather but the aluminium bodywork is actually fairly sturdy. Along the fascia you’ll find a row of buttons for up-close playback control, a miniscule display panel that only shows a limited amount of information, and a USB port – but unlike the BDX3200 this isn’t hidden under a flap.

On the rear panel you’ll find the same array of sockets as the BDX3200 – HDMI, composite, analogue stereo and coaxial digital audio outputs, plus an Ethernet port. Anyone looking for multichannel analogue outputs or a second USB port should start looking at more expensive players – this is as bare bones as Blu-ray players get.

With no 3D on board the Toshiba BDX1200’s feature list is short to say
the least, but then again at around £100 you can’t expect much more.
Even so, it’s undeniably disappointing that neither of Toshiba’s new
players will let you stream media from PCs, which is an increasingly
popular way of distributing content around the home. And with its
impressive-looking cloud-based service Toshiba Places available on its
latest range of TVs, it’s a shame that something similar couldn’t have
been incorporated into its Blu-ray decks. However, you can still play
your content via the USB port on the front panel. The player supports a
decent range of formats, including DivX HD, MKV, MP3 and JPEG.

Being
a Profile 2.0 player, the Toshiba BDX1200 can access BD Live content,
but you need to connect 1GB of USB storage to do so. And with no
built-in Wi-Fi or support for USB dongles, the wired Ethernet connection
represents your only way of getting online, which may be a pain in the
backside depending on the player’s proximity to your router.

Elsewhere
the deck does everything you’d expect it to, such as decode Dolby True
HD and DTS HD Master Audio into PCM (in case your AV receiver’s HDMI
inputs are earlier than v1.3) or output them in bitstream form. It can
also output Blu-ray pictures in their native 1080/24p format, which
should result in a lack of judder when viewed on a compatible TV.

Like the BDX3200, the BDX1200 is blissfully simple to setup. That’s mostly thanks to the clear and responsive on-screen menus, which are embellished with HD graphics and use a logical structure that sensibly groups the options into Display, Audio, General and Information sub-menus. Highlight the icons along the top and the list appears below – simples. OK, it’s not a patch on Panasonic’s latest one-touch system, but poses few operation problems.

We were impressed by the BDX3200’s comprehensive range of picture adjustments, but delve into the Display settings here and disappointingly many of them are missing.  You still get the same dual-menu arrangement – Video Processing and Motion Video Processing – but the latter lacks the individual colour adjustments and the second tier of picture settings, plus you only get three picture presets (Standard, Vivid and Smooth) and not the Custom or Cinema settings of the BDX3200. 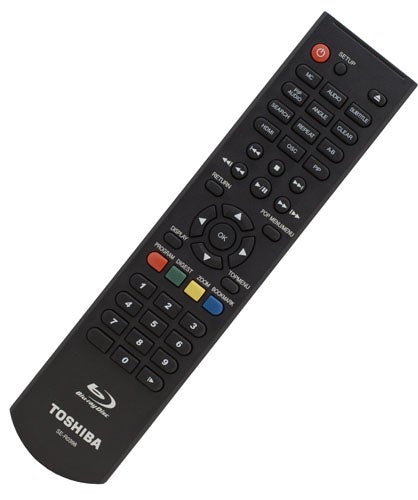 The remote control is identical to the BDX3200’s zapper, and although it won’t set your coffee table alight the uncluttered layout does make life easy when controlling the player’s menus. The neat, logical arrangement of buttons won’t take long to master and sensibly the menu controls and playback keys are conveniently placed for your thumb.

With HDMI connections ensuring a faithful digital representation of
what’s on the Blu-ray disc, it’s pretty hard for players to deliver a
bad picture, even budget-conscious models like this. And sure enough the
BDX1200’s image quality is excellent, making our Avatar disc sparkle
with razor-sharp detail reproduction, wildly vibrant colours and levels
of depth and contrast that keep the picture look cinematic at all times.

The
movie’s intricate CG is beautifully rendered and pin-sharp, ensuring
that the textures of skin, plants and scenery never get lost in a mushy
haze. That, juxtaposed with the deep, natural colours and complete
absence of digital nasties like jaggies or block noise, means that you
get a dazzling 2D picture, even during dark scenes when terrific shadow
detailing means you never lose track of what’s going on. Motion tracking
is right on the money too.

To back up our findings we took the
trusty Silicon Optix HQV Blu-ray for a test drive and like the BDX3200
it passes the disc’s stern tests with flying colours. The Video
Resolution Loss, Jaggies and Film Resolution Loss tests were cleanly
reproduced, avoiding the sort of artefacts that constitute a fail, which
isn’t bad for a £100 player.

But
sonically the BDX1200 is merely ordinary. After hooking up the analogue
stereo outputs to our receiver and blasting out some CDs, songs sound a
little thin and don’t eke out the same levels of detail as a pricier
deck would. But to be honest this isn’t aimed at audiophiles and budget
buyers can have few complaints with this level of audio quality.

Verdict
On
paper the BDX1200 may look like an unappetising prospect – a Blu-ray
player with no networking capabilities, no 3D support, no Wi-Fi, no
cloud internet content and a generally basic spec. But if you accept
that you’re never going to get those features at this sort of price,
then the BDX1200 starts to look like a decent little deck that still has
a place despite its basic nature.

It’s perfect for people who
simply want to watch 2D Blu-rays and DVDs, perhaps in the bedroom,
without fussing about with all those fancy features. And if that’s you,
then the BDX1200 is a decent choice, thanks to its terrific pictures,
user-friendly operating system and digital media support via USB.