With all the hype and bluster surrounding 3D, it’s easy to forget that movies are still perfectly enjoyable in two dimensions, old-fashioned though it may seem. In fact, there are many people to whom 3D is a four-letter word – they’d rather seek out a Blu-ray player that concentrates on playing 2D discs well and save themselves a bit of cash in the process.


To that end, there’s a wide range of affordable non-3D Blu-ray players on the market, including the Panasonic DMP-BD75 and this little number from Toshiba. The BDX1100 is the entry-level player in Toshiba’s current range (due to be replaced over the next few months) and comes with a modest-looking spec sheet, as befits a player with such a bargain basement price tag.

Obviously, at this price you’re not going to get the finest build quality known to man, and indeed the deck feels light and hollow. However, it’s surprisingly attractive for a budget machine, with a lovely gloss-black fascia and some unusual curves and slopes. And at 360(w) x 45(h) x 232(d)mm it’s more compact than most players too, which could be handy if you’re using it in the kitchen or bedroom where there may be less space to play with.


On the fascia are a few discreet buttons including play and stop, as well as an LED display panel that’s so small it’s difficult to read. Tucked away at the bottom is an SD card slot that can be used for digital media playback and BD Live content storage (for the latter you’ll need a card of at least 1GB).


The rear panel is sparse, but goes one better than the Panasonic DMP-BD75 by adding a coaxial digital audio output that allows you to pipe Dolby Digital and DTS digitally if your receiver lacks HDMI inputs. You also get an HDMI output of course, capable of sending 1080/24p pictures, HD audio bitstreams and PCM, alongside composite video and stereo audio outputs. The selection is topped off by an Ethernet port, which in this case is used solely for accessing BD Live content from the Internet.

When shelling out £70 on a Blu-ray player, you really shouldn’t expect a cavalcade of cutting-edge features, and the BDX1100 is confirmation of that. For example, there’s no DLNA networking (just like Toshiba’s step-up BDX2100 and 3D-capable BDX3100), which leaves the SD card slot as the best way of playing back digital media.


There’s no access to any sort of Internet portal like Panasonic’s Viera Cast or Samsung’s new Smart Hub either, although encouragingly Toshiba recently unveiled a great-looking cloud-based Internet hub called Toshiba Places that could find its way onto the company’s players in the future.

As for media compatibility, the BDX1100 will play DivX, MP3 and JPEG files from SD card or disc, as well as AVCHD from disc. The player also handles SDHC cards, giving you more memory to play with. Dolby TrueHD and DTS HD Master Audio can be passed to a receiver in bitstream form, but when converted to PCM the deck only outputs a stereo signal, which is of no use to those who don’t have HD audio decoding on their AV receiver.


Thankfully, the BDX110 is very easy to use. When you first boot it up an installation wizard guides you through all the key settings (such as aspect ratio, HDMI resolution etc), but if you need to make further tweaks an attractive, logical setup menu makes it an easy job. It’s a full-colour affair with bright, jazzy graphics, legible text and a level of responsiveness that lets you zip between options with ease. 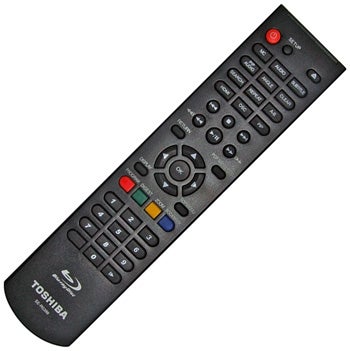 What’s more, it houses one of the BDX1100’s most interesting features. We’re talking about a suite of picture adjustments, which come in two groups – first is the Video Processing menu, which offers a bunch of basic picture settings covering Brightness, Contrast, Hue and Saturation, alongside a separate option to change the Sharpness (High, Medium or Low).


The second group, called Motion Video Processing, features three picture presets – Standard, Vivid and Smooth. Whether or not we needed two separate menus is a moot point, but it does mean you have to use the tweaks wisely, as the changes made in one menu still apply when you tweak the other, and you could end up with horribly over-processed pictures if you’re not careful.


Even though the light, plasticky remote isn’t the most attractive or well-made zapper we’ve ever fondled, at least it makes the deck easy to control. Button placement is spot-on, and clear labelling makes it easy to find everything. One buttons is mysteriously labelled MC (anyone?) but other than that, operation is stress-free.


During playback you can also call up a handy little onscreen display (by pressing the OSC button) that shows you all the relevant information about the current disc, including audio format, video/audio bitrate and title/chapter info.

As ever our first test was to see how long the player takes to load discs, and the good news is that the BDX1100 fires up ”Terminator Salvation” in around 40 seconds – by no means the fastest we’ve clocked but any deck that keeps it under the tiresome one minute barrier is OK by us.


And it backs this up with enjoyable picture quality, provided you heed our advice about keeping picture tweaks to a minimum. ”The Dark Knight” is positively bursting with detail, making the Joker’s horrific scars and smudged make-up look horribly real, while superb black depth and shadow detailing clearly differentiate the levels of darkness within Gotham City’s underbelly.


We’re not saying it’s completely flawless – there’s a touch of noise here and there, DVD upscaling looks a little untidy and it makes a pig’s ear of some of the Silicon Optix HQV disc’s test patterns, in particular the camera pan across Raymond James stadium, which is juddery and beset by noise. The Film Resolution Loss test also flickers more than we’d like, but it does render the jaggies and Video Resolution tests smoothly.


Tested through a good quality HD audio-compatible receiver and speakers, the BDX1100’s Dolby TrueHD and DTS HD Master Audio sound quality is fine. Stereo music playback from the analogue outputs is adequate but a little coloured for hi-fi buffs – if you want sparkling music playback, set your sights a little higher than a £70 player.


The BDX1100 is aimed at a very specific buyer – someone who wants a deck simply for playing their Blu-ray collection, perhaps in a second room where space is tight, with no desire for networking, Internet content, extensive media support or 3D.


If that’s you, then you’ll probably be very happy with this player, particularly if you find it for the same ridiculously low £70 price tag that we did, but those who want more from their Blu-ray experience are better off looking to entry-level players from Sony, Panasonic, Philips or Samsung.