There’s no shortage of 10in Android tablets on the market, so how do you stand out? In Toshiba’s case, it made the AT200 the thinnest tablet of its kind in the world, with some of the best connectivity of any standalone tablet to go with it. However, when we reviewed it, the Android device had its share of issues, not least a few quirks with its screen, high price and average processing power. Now the Japanese company is back with its AT300, taking all the good bits from the previous tablet, increasing thickness only slightly and chucking in Tegra 3 to make for a potential winner. We went hands-on with the Toshiba AT300 to see how it held up. 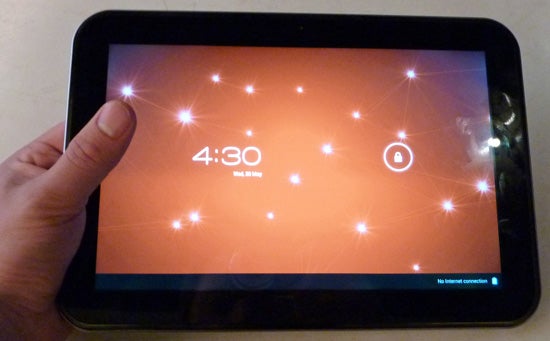 Toshiba has stood out for its daringly different tablet designs ever since the Thrive family, which eschewed the thinness drive in favour of class-leading connectivity, an interchangeable rubberised back and, most uniquely, a swappable battery. Mind you, the AT200 inevitably toned things down when it went on its diet, and the AT300 follows its lead in sporting a fixed back and sealed battery. However, it still gives you the best connection range of any slim 10 incher.

Design
At just under 9mm thick, the AT300 doesn’t match its 7.7mm predecessor but is still one of the slimmest tablets going. Its significantly rounded corners already differentiate it from the ‘squarer’ crowd, and it flat design with broad edges further helps it stand out from its tapered rivals. In other words, it actually appears less slim than it is, but that’s no bad thing and we like the look.

Build quality throughout is top notch. The front is a single Gorilla glass sheet with a glossy black bezel surrounding the screen. Its edges sport the same aluminium surround as the AT200, and the back sports a matt texture that prevents scratches and ensures a great grip, whether in your hand or on a surface. The end result of its thick rounded edges, low 590g weight and textured finish is that this 10in tablet is very comfortable to hold. 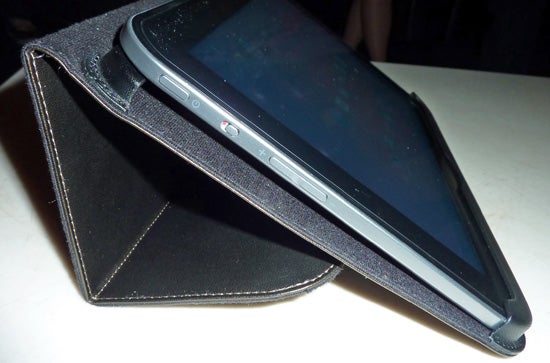 With its optional case

Connectivity
While we don’t see any tablet challenging the ThinkPad Tablet or Transformer Pad 300 with dock for connectivity, the AT300 is still top of the slim standalone 10in tablet class, as it offers not only a headphone/microphone jack, microHDMI and microUSB, but also a full-size SDXC card slot. That’s a pretty rare but incredibly useful addition to any portable device, not only because it allows you to cheaply expand memory by up to 128GB, but also because you can directly insert memory cards from your camera without an extra adapter.

While all the tablet’s connections are located on the right, the left houses the power button, a tactile volume rocker and handy orientation lock switch.

Naturally Wi-Fi N and Bluetooth 3.0 cover the wireless side of things, along with optional 3G – again an option not offered by some rivals, most notably the Asus’ Transformer Prime and Pad 300.

Cameras
We didn’t get a chance to test the 5MP rear or 2MP front cameras properly in the low-light presentation environment, but they seemed to hold up about as well as tablet cameras usually do, which is to say there’s a lot of room for improvement. On an unusual but positive note, both sport their own LED flash, and of course HD video is also on the menu.

Specifications & Screen
Specs are standard for a Tegra 3-based tablet. Toshiba’s AT300 sports Nvidia’s quad-core processor with its fifth companion core running at its standard clock speeds of up to 1.3GHz and backed by 1GB of RAM. For storage you can select either 16GB or 32GB configurations, and as mentioned this is expandable.

There’s plenty of power here for all your gaming and video needs, not to mention less intensive usage such as browsing the internet. Unlike previous-generation SoCs, intensive Full HD playback won’t be an issue, and some games have been graphically enhanced only for Tegra 3. 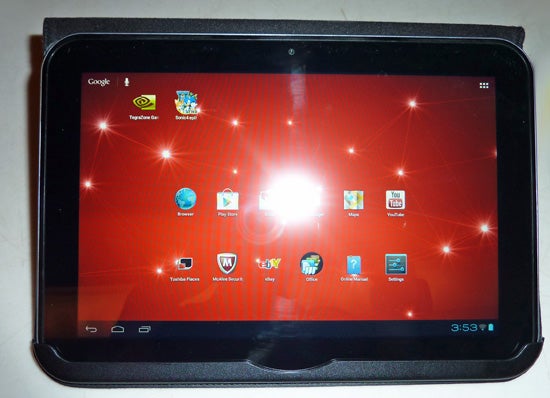 Google’s Android 4 is the operating system running the show, with minimal customisation and a few pre-installed apps.

The AT300’s 10.1in screen is fairly typical for a premium tablet, with a 1,280 x 800 resolution and the superb viewing angles IPS brings to the table. Colours seemed vibrant and backlighting reasonably even, though we will need to test it in the lab to give a definitive verdict.

Battery
Toshiba claims up to 10 hours of continuous video playback, which is in line with other 10in Tegra 3 tablets. We expect you’ll get up to eight hours in mixed use and more with idle periods thrown in. 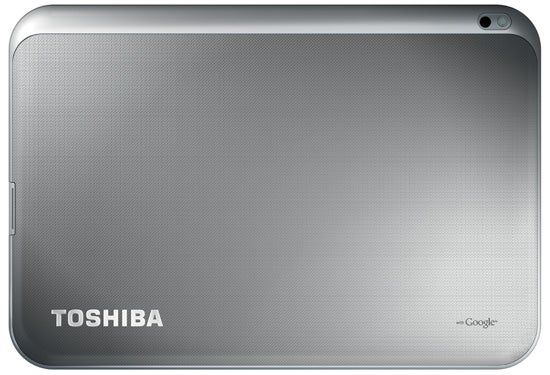 The AT300 will be available in Q2 2012 and should be priced competitively with other premium Tegra 3 tablets. Would you get one instead of an iPad 2 or even as a cheaper alternative to the new iPad?