Toshiba is back in the television game. The first results of its new brand licensing arrangement with Turkish manufacturer Vestel have formally been unveiled – and it’s fair to say that in some ways, at least, they’re more ambitious than we might have expected.

There’s a whole range of LCD TVs, including 4K-resolution smart models and TVs with built-in DVD players. By far the most eye-catching of the new Toshiba TVs has to be the 65X9763: a 65-inch TV built around OLED technology.

As you’d expect, the X97 features an LG-sourced OLED panel at its heart. Aside from that, though, it appears to be an all-Toshiba and Vestel effort – rather than some basic rebadging exercise. 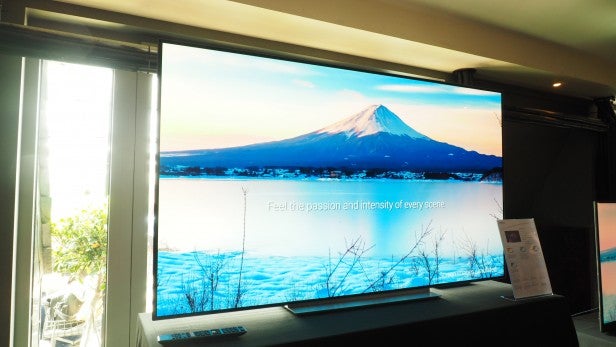 The involvement of Toshiba in the new flagship OLED TV (and the rest of the brand’s new TVs) was repeatedly stressed at the product’s unveiling. The X97’s physical design originated from Toshiba in Japan – the picture processing is apparently also Toshiba’s own work – while the finished TVs have to go through six weeks of intensive testing at a facility on the south coast manned by a team of Toshiba engineers.

The design of the X97 is reasonably attractive. Its bezel is a little wider than we’re used to seeing now, plus its black finish looks and feels a little mundane by OLED standards; much of the rear sticks out further than most OLED TVs, too.

However, the centrally mounted desktop stand benefits from an attractive and robust metallic silver finish, and Toshiba has a good excuse for that bulky rear in the form of a built-in ‘speaker box’ and subwoofer that promises a better sound than you’d generally get at the affordable end of the OLED TV spectrum. 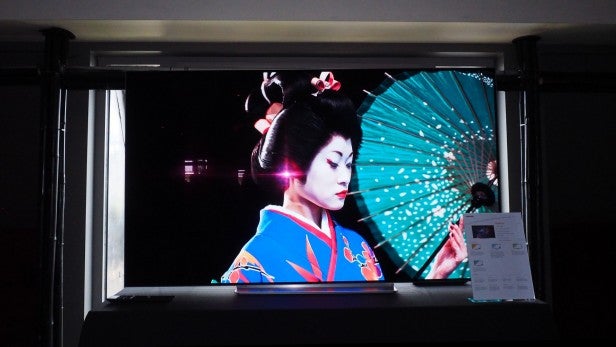 Yes, the Toshiba 65X9763 is being pitched as a ‘budget’ OLED TV. Toshiba wouldn’t confirm pricing, but it was hinted by a couple of company representatives that it may undercut the cheapest LG 65-inch OLED TV by £200 or so, which would make it around £4,299 based on current LG pricing.

Clearly, Toshiba believes that being able to claim the cheapest 65-inch OLED TV money can buy will serve it well as a marketing story. The company is probably right.

Despite its affordability, the X97 will be operated by a smart TV system designed in-house by Toshiba and Vestel. I was able to get confirmation that Netflix and Amazon Video will both be available on this proprietary platform, following a firmware update that should happen before the September launch. 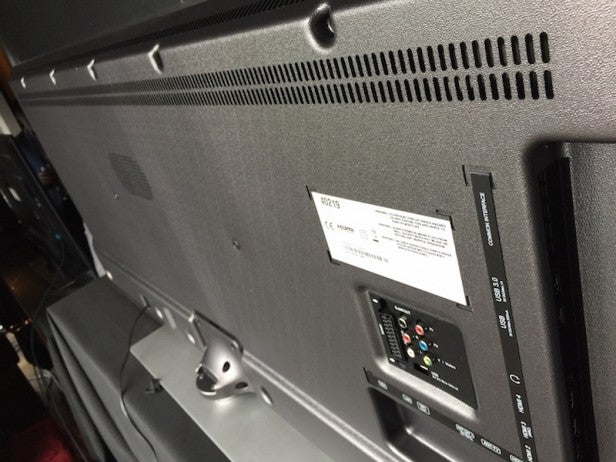 Other intriguing claims Toshiba makes for the X97 are that it suffers only 1ms of input lag, which will see it become potential hot property for gamers, and that it can deliver 99% of the DCI-P3 colour format used in commercial digital cinemas. I couldn’t form an opinion on the input lag claim during the demonstration, but the screen’s colours certainly seemed to enjoy the rich lustre that’s OLED’s trademark.

It took only a few seconds of staring at the X97’s demo pictures to see that it delivers on those two key OLED advantages of exceptionally rich, deep black levels and much wider, useful viewing angles than you get with LCD TVs.

What’s more, coming to the X97 demo on the back of reviewing the Samsung QE55Q8C, it was also great to be reminded of OLED’s freedom from the backlight striping and clouding issues seen with LCD TVs – especially those that use edge-based lighting.

The demo room was too bright to see how well the 65X9763 copes with the potential greyness issues when showing content that’s only just brighter than full black, but there’s certainly no question that Toshiba’s set maintains OLED’s core black level advantage.

Colours looked rich, too, if a little short of tonal subtlety, and detail levels and motion both looked more than respectable. However, I’ll need to test the set with my own content to be absolutely sure about this latter point. 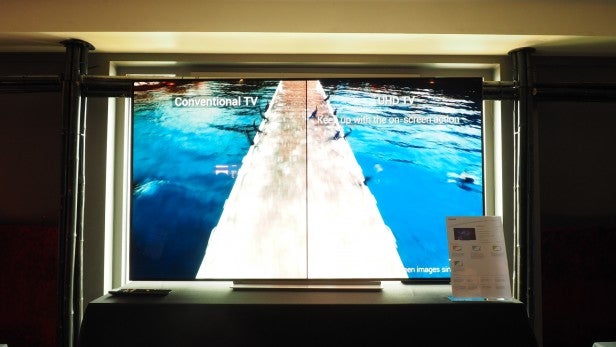 The 65X9763’s undoubted up-front appeal does hide one potentially deal-breaking limitation. however. The screen didn’t appear as bright as the latest OLED TVs from the likes of Sony, Loewe and, of course, LG. At first I assumed this was because Toshiba wasn’t using the latest generation LG panel in its price-centric OLED debut, but it turns out there’s more to it than that: namely that the 65X9763 doesn’t support high dynamic range (HDR).

This means it will offer only 4K resolution and a sense of the wider colour gamut of Ultra HD Blu-rays, not the spectacular enhanced luminance range that practically all 4K Blu-rays – and a growing number of Amazon and Netflix streams – now enjoy.

To be clear, the 65X9763 will still play 4K Blu-rays and 4K Netflix and Amazon streams; you just won’t get HDR benefits.

This is obviously a significant omission. In fact, given how spectacular HDR can look, in my view it seems that the 65X9763 will likely have to be significantly more than £200 cheaper than its nearest HDR-capable OLED rival if it wants to be a successful budget OLED option.

However, if a big enough price advantage can be achieved then I don’t believe the omission of HDR need be a deal-breaker. Simply being able to experience the core picture advantages of big-screen OLED technology for an unprecedentedly low price may well be enough to see cash-strapped and quality-starved punters pouring towards Toshiba’s new OLED surprise.

Look out for a full test of the 65X9763 as soon as a review sample becomes available.