The 65L9363DB is Toshiba’s first 65-inch UHD/4K TV. It’s not actually Toshiba’s first UHD TV period, though. That honour belongs to last year’s Toshiba 55ZL2. But we think it’s fair to say that the Toshiba 65L9363 is the company’s first UHD TV built with UHD as its main attraction, since the ZL2’s UHD resolution was really all about delivering a glasses-free 3D experience.

The Toshiba 65L9363DB is reasonably, rather than outstandingly, attractive. Its bezel is quite slim for something supporting a 65-inch screen, and the contrast between the black inner frame and silver out frame is pleasing. The unusual open-framed rectangular desktop stand is quite attractive too, and we appreciate that you can rotate the massive screen around on it. 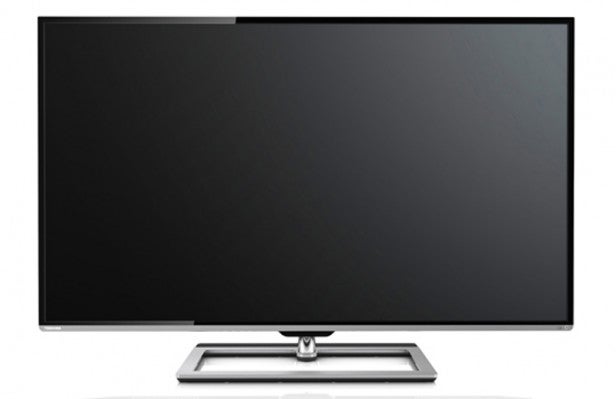 However, the finish of the silvery part of the Toshiba 65L9363DB’s bezel looks a little plasticky, and the TV feels a bit wobbly on the stand. Though not so much that there’s any genuine worry of it tipping over.

Connectivity initially looks strong. There are four HDMI inputs for starters, while multimedia inputs include an SD card slot as well as a couple of USBs. SD card slots are so common in digital cameras these days that we think it’s high time more TVs started to carry slots for them – especially UHD TVs given their ability to show digital photos at such high resolution.

No discussion of a UHD TV at the moment would be complete without a look at its HDMIs from a 4K perspective – as in, are they built to the new HDMI 2.0 standard capable of shipping UHD/4K signals at higher frame rates than 30fps?

Toshiba has confirmed to us that the 65L9363DB’s HDMIs are not built to the new v2.0 standard. However, the brand assures us that it will be providing at some point in the coming months an update that will enable the TV to handle the UHD 60fps format HDMI 2.0 is built around.

We’ve covered the Toshiba Cloud TV online service already, so given how much else there is to talk about with the 65L9363DB we’ll restrict ourselves here to saying that the service carries some good ideas – including extensive content searching tools, a friendly quartet of TV recommendation ‘avatars’, and an excellent smart device app that lets you surf TV listings on your tablet computer or smart phone rather than on the TV – but is let down by a sluggish interface and fairly serious shortage of online video streaming services.

As well as having 3,840 x 2,160 pixels within its 65-inch screen, the Toshiba 65L9363DB has plenty of other features to support its UHD credentials. The main one is a new CEVO 4K processing engine that remaps standard def and normal HD footage onto the 65L9363DB’s UHD display.

We find it a bit odd that Toshiba should refer to the 65L9363DB as a UHD set but then call its processing CEVO 4K rather than CEVO UHD. But such, we guess, is the confusion still surrounding how best to refer to the new higher-resolution TV technology. 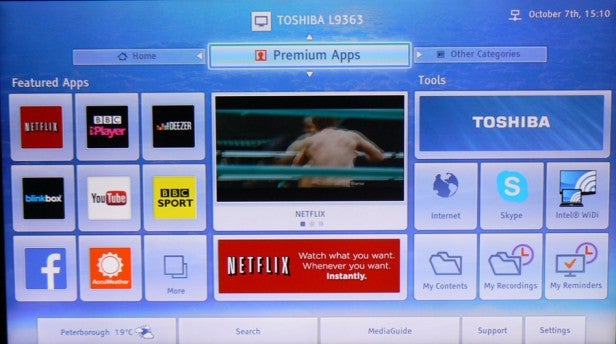 Toshiba’s CEVO processing engine has traditionally been one of the more powerful imaging systems in the TV world, which will hopefully serve it well when faced with the mammoth task of calculating how to add millions of extra pixels of image data to non-UHD content.

CEVO’s workings include a host of important elements, kicking off with Adaptive Resolution . As well as automatically detecting the nature of the source (it deactivates with native UHD sources, thankfully), the ‘adaptive’ part of the mode’s name refers to the fact that it breaks the image down into many parts so that it can choose the best upscaling approach for individual image sectors.

This should help the upscaling achieve more precise results and, intriguingly, could help enhance the upscaled image’s sense of depth, since sharpness plays a key role in establishing the sense of depth in 2D and 3D images. We’ll look at its performance later.

Another interesting element of the CEVO 4K system is its ability, apparently, to retrieve more of the original film transfer detail a Blu-ray may contain if the film it carries was derived from a UHD master than you would see on a normal HD TV. This echoes a similar feature on the Sony KD-65X9005A 4K TV, and while it sounds like witchcraft, we’ve seen enough evidence of it in action to accept that it does actually make a small difference, especially in colour resolution.

Toshiba also claims the CEVO engine can restore more colour detail in real time, as well as increasing colour gradation so that you see less evidence of the sort of colour banding and blocking that occurs when video is compressed to save bandwidth for broadcasting or putting onto DVDs or Blu-rays.

One final, very intriguing element of the Toshiba 65L9363DB’s CEVO 4K engine is its contrast management. The information we have on exactly how this works is a little vague, but essentially it combines a dynamic contrast system with the previously mentioned technique of breaking down the image into small areas (to aid upscaling) to boost the image’s dynamic range and enhance shadow detail reproduction.

The Toshiba 65L9363B’s UHD resolution will also have a big part to play in its 3D playback. The TV uses passive 3D, which halves the effective resolution of a set. This means the UHD resolution effectively enables you to enjoy a genuinely ‘full HD’ 3D experience from 3D Blu-rays. Four pairs of 3D glasses are included with the TV as standard.

Other interesting features of the Toshiba 65L9363DB include its AMR 800Hz-emulating processing for enhanced motion reproduction, and an Audyssey sound system that both processes sound to deliver an enhanced soundstage and can even adjust volumes automatically to best suit your room environment.

There is one feature the Toshiba 65L9363DB doesn’t have that perhaps we might have expected it to, given its status and price is any sort of local dimming arrangement for its edge LED lighting system.

You could if you wished spend hours playing around with the huge quantity of picture adjustments the 65L9363 puts at your disposal. Naturally these include the colour, gamma and white balance management facilities Toshiba also manages to include on the majority of other TVs in its 2013 range. Plus there’s a welcome reappearance for Toshiba’s unusually plentiful array of picture presets, including a trio of ‘Hollywood’ modes designed with the established video industry standards in mind.

The only thing we would say about these presets, though, is that we didn’t feel entirely satisfied with any of them, making at least some time spent with the more detailed fine tuning menus worthwhile if you feel up to it. In particular we’d suggest reducing the image’s overall colour saturation a touch, and taking a smidge of yellow out of the image.

The menus also include a level of control over some of the CEVO 4K workings. You can turn Resolution on or off, choose from multiple levels of ‘strength’ for the dynamic contrast system, adjust the strength of the set’s AMR motion processing (including turning it off entirely), set the level of separate MPEG and standard noise reduction systems (or turn them off entirely), and most intriguingly of all, adjust three features called Fine Texture Restoration, Brilliance Restoration and 3D Judder Cancellation.

None of these last three tools crop up on TVs lower down Toshiba’s range, yet they all sound interesting. The 3D Judder cancellation system is fairly self-explanatory, and should hopefully address the common situation where motion in the 3D frame looks billowy or stuttery.

The other two features are essentially fine tuners for the upscaling engine, especially when you’re watching Blu-rays that have been derived from 4K masters. Their default setting is Auto, and we’d suggest that’s where you leave them.

Other set up tips would be to make sure all noise reduction systems are deactivated – especially with native 4K content; that the adaptive backlight feature is set to Low (switch it off and contrast levels take a hit, set it to high and the image looks too stretched in terms of its dynamic range); and that the backlight level is set to between 30 and 40 when watching films, for any higher than this and the TV struggles to deliver a convincing black colour.

Finally we personally would recommend that you don’t use the Resolution element of the processing, since it takes the detail enhancement of the upscaling system too far, leaving images looking too noisy. The only possible exception to this advice would be if you’ve got the TV installed in a very large room, as from a greater viewing distance you might appreciate the extra sense of sharpness Resolution brings to upscaled pictures, without noticing the noise so much.