It’s been a while since we last had to get embroiled in the whole active vs passive 3D spat. But today we have no choice but to roll up our sleeves and get stuck in again, as we have sat before us on our test bench Toshiba’s 47VL863B: the first non-LG TV we’ve seen that uses LG’s ‘passive filter’ 3D technology. Not surprisingly, this tech and the 47VL863B’s core 47in panel have both been ‘bought in’ from LG. But aside from this, the set appears to be all Toshiba’s own work.

The design is very much in keeping with Toshiba’s other 2011 sets to date, which is something of a mixed blessing. On the upside, the TV’s finish looks tough and rigid, and the sculpting is engagingly no-nonsense. However, one or two flourishes might have been nice, and actually the build quality feels less robust than expected once you start lifting it onto its stand.

Connectivity is impressive. There are four v1.4 HDMIs on hand for 3D/HD duties, plus there’s some pretty expansive multimedia functionality in the form of two USBs and a LAN port. The USBs can make the TV wi-fi ready via an optional dongle, or they can play a passable selection of photo, music and video file types. Supported formats comprise MPEG2-PS, MPEG2-TS, MP4, AVI (DivX), MKV (DivX Plus HD), and ASF video files; MP3, MP4, WMA and MKA audio files, and JPEG photos. 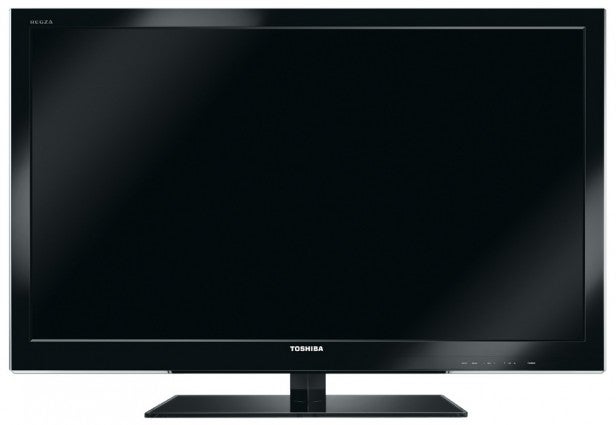 The LAN port allows the 47VL863B to function as a rendering device for files stored on a networked DLNA PC (ideally a Windows 7 one if you want to maximise the TV’s compatibility), and it’s also there because it has to be, since the TV carries a Freeview HD tuner.

The most significant attribute of the LAN port, though, is its access to Toshiba Places. This comfortingly untechnical name describes Toshiba’s new smart TV system, as discussed in depth recently in our review of the 46UL863B. We really like the design and personalisation ethos of Toshiba Places, which uses a built-in camera and face detection to figure out who’s using the TV, and adjusts the various favourites lists and log-in details accordingly.

But we don’t currently like how little content Toshiba Places sports versus rival platforms, especially when it comes to free video services. But hey – as with all online services, there’s always the potential for Toshiba to keep improving its smart TV service via firmware updates.

The 47VL863B’s full HD screen – with the polarising 3D filter applied to its front – is illuminated by an edge LED system, and is claimed to deliver a massive and doubtless optimistic contrast ratio of 7,000,000:1. Also potentially key to the TV’s success as a 3D display is Active Vision M400 processing, where the 400 bit comes about as a result of a 200Hz refresh rate mixed with some motion interpolation processing. This should remove pretty much all blur and judder from the image, but as always we’ll have to see how unnatural the picture starts to look when the processing is active.

The 47VL863B’s 3D features are very straightforward. Any alternate frame 3D sources are detected automatically, while pressing the remote’s 3D button when wanting to watch a Sky 3D broadcast simply throws up side by side or top and bottom options. That’s it. There’s no tinkering around with image depths or convergence points, and rather more startlingly, there’s no 2D to 3D conversion.

Personally we can’t imagine ever wanting to watch a 2D to 3D conversion. But with Panasonic having decided fairly quickly that this feature was too important commercially to leave off all but its very earliest 3D plasma releases, it’s possible that the lack of 2D-to-3D on the 47VL863B might lose it a few sales.

The 47VL863B is extremely well-equipped with picture adjustments, meanwhile. In fact, it’s got pretty much everything a professional installer would likely need, including 2-point or 10-point white calibration, RGBCMY colour management, static gamma adjustments, and lots more besides.

When it comes to image processing, you can adjust the strength of the ‘400Hz’ system or turn it off entirely, and call in separate MPEG and standard noise reduction systems. You also get Toshiba’s Resolution system for boosting the sharpness of standard definition sources. 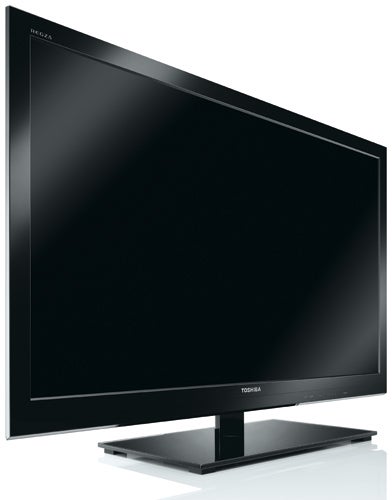 Donning one of the four pairs of RealD passive 3D glasses Toshiba ships with the 47VL863B, first impressions of its 3D performance were very good. We certainly appreciated the relatively small amount of brightness and colour saturation removed from the 3D images compared with active 3D sets.

There’s also practically no crosstalk (double ghosting) noise at all provided you’re not watching the set from more than 15 degrees or so above or below the screen.

Add to this the relatively inoffensive nature of the glasses versus most active models, and the fact that there’s not a trace of flicker even if you’re watching in bright light, and the 47VL863B definitely makes a case for passive 3D technology as a great ‘casual’, family alternative to the active 3D approach.

Of course, there are downsides to passive technology too – and unlike the 42in 42LW550T, the 47in screen on the 47VL863B is large enough to expose them. For instance, you can tell that 3D Blu-rays don’t contain as much detail and absolute clarity on the 47VL863B as they do on a similarly proportioned active 3D TV. Also, bright edges can show up clear signs of horizontal black ‘striping’ or jaggedness, and if you sit closer to the screen than you sensibly should (under 2m), then you can also make out the horizontal line structure of the polarising 3D filter on the screen over bright objects like daytime skies or brightly lit skin.

From a typical living room viewing distance, though, the striping/jagging issues aren’t so bad that you find yourself routinely distracted by them, while the reduced resolution doesn’t feel as obvious as it is on the 55in LG 55LW650T. Especially as the enhanced ‘punch’ of the 47VL863B’s 3D pictures versus active ones gives the impression that they’re more detailed than they really are.

Real AV enthusiasts will, of course, shudder at the very thought of any horizontal line structure and reduced Blu-ray resolution. But not everyone is an AV enthusiast – or else they can’t afford to be if they’ve got to find active glasses for a large family. So for a good many ‘normal’ families, the 47VL863B is so far looking like a very good 3D option. Especially given that we’ve found it selling for less than £900.

The problem with the 47VL863B is that it’s not a particularly brilliant 2D TV. The main reason for this is that its black level response isn’t up there with the best of its rivals. Dark scenes tend to look rather grey instead of black unless you ramp down the backlight output so far that shadow detailing takes a real hit. Plus there’s a little black level inconsistency, with some areas of the screen looking brighter than others, and a little brightness ‘jumping’ going on at times if you’ve got the set’s dynamic LED system engaged.

It was notable, too, that the TV’s black level and colour response diminish quite severely if you have to watch the set from more than 30 degrees or so off axis.

In other respects, though, the 47VL863B’s 2D pictures are mostly pretty good. Colours are rich and vibrant, and although the presets aren’t great at delivering particularly natural looking tones, it’s no great hardship to get things looking better via the provided colour management tools.

HD images look detailed and quite sharp, too. There’s some resolution loss over moving objects, but it’s not severe, and if it bothers you it can be reduced via the Active Vision M400 processing system. We’d recommend that you only use this system on its Standard rather than Smooth setting, as the Smooth setting makes films look like videos. Neither setting, though, produces the sort of aggressive unwanted processing side effects that can trouble so many motion processing engines. 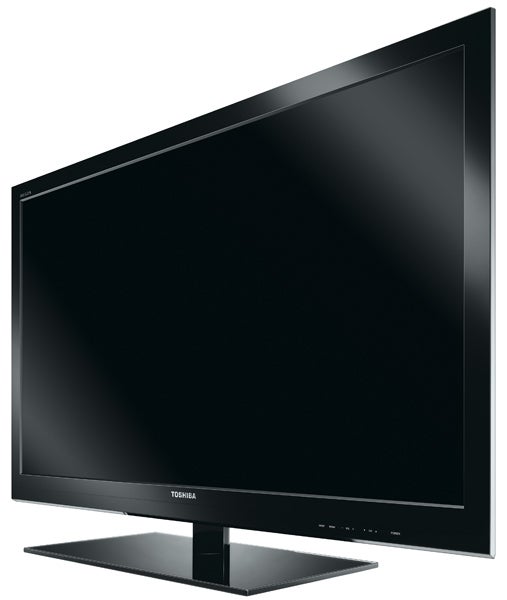 Turning to standard definition sources, it’s no surprise from past experience to find Toshiba’s Resolution system doing an unusually good job of adding sharpness to DVDs and, especially, Freeview tuner broadcasts. However, you should only use Resolution up to around half of its maximum strength, otherwise the sharpness gives way to dotting noise.

Actually, with low quality digital broadcasts the Resolution system is problematic even on its lowest power setting, since it tends to exaggerate MPEG noise. But you can always turn it off if it hinders more than it helps. Or you can experiment with the TV’s noise reduction systems, as these can calm the noise down without taking away all the extra sharpness Resolution was designed to add.

Gaming on the 47VL863B is decent fun. The rather average black level response can occasionally be problematic during very dark sequences, but the picture looks decently sharp, and we measured input lag at a respectable 35ms using the TV’s Game preset.

The 47VL863B’s audio, finally, is about par for the affordable flat TV course. This means that the speakers struggle to deliver much in the way of bass, leaving trebles often sounding rather exposed, and the mid-range overloaded. There is perhaps more raw volume than you get from some skinny TVs but decent volume isn’t the only thing you need for a good sound performance.

Some edge LED flaws when showing dark scenes in 2D stop the 47VL863B from being anything more than a solid 2D performer. Also, while there’s potential in the new Toshiba Places ‘smart TV’ system, right now it’s rather off the pace compared with what some rivals are doing in the online TV arena.

However, the 47VL863B’s bright, breezy and respectable 3D performance ensures that it’s a set that anyone after a moderately priced, family friendly, big-screen 3D TV really should at least put on their audition list.