Those boasts about the 47L7453’s picture being 75% brighter than that of previous Toshiba TVs immediately appear to be more than idle marketing guff. Even after we’d calibrated images to deliver the best all-round performance – including black level response – the 47L7453’s picture still looked very intense, popping off the screen with an almost visceral intensity.

What’s particularly good about this is that it’s achieved without screwing up other elements of the picture. For instance, colours still contain plenty of subtlety despite enjoying exceptional levels of potency and saturation, and this colour intensity remains impressively intact even in very dark parts of the picture, overcoming a key common LCD weakness. 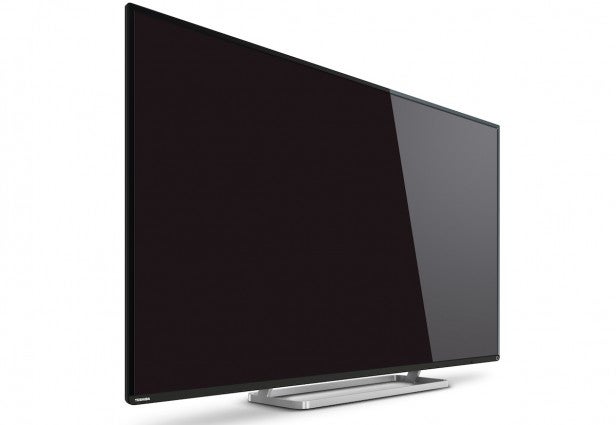 It’s also a huge relief to find the exceptional potency of the 47L7453’s pictures not causing pictures to look excessively noisy. All too often images that attempt to be aggressive – like those you get with most of Samsung’s out-of-the-box picture presets – make grain look excessive; details and edges look forced; and colours look fizzy. But this is definitely not the case with the 47L7453, which actually retains an attractively polished, smooth look to its intense HD pictures – except, of course, where a film-maker deliberately wants the image to look a bit rough.

As well as brilliantly dismissing the common LCD problem of looking pallid and muted during dark scenes, the intensity of the 47L7453’s pictures makes it an exceptionally capable option for bright room set ups. Certainly there are precious few other TVs we’ve seen able to deliver dark scenes with sufficient punch to make them still look eye-catching when the lights are on or the curtains are open on a sunny day.

However, the 47L7453 doesn’t add to the slight softness with motion blur, partly as a result of IPS technology’s innate advantages where LCD response times are concerned, but also because the CEVO Engine and dual-core processors help the 47L7453 produce easily Toshiba’s finest motion performance to date. So long as you stick with the Standard setting for the ClearScan motion control system you’ll see practically no judder or resolution loss when the screen is showing motion, even during fast camera pans. Yet just as importantly, the motion enhancement doesn’t make pictures look over processed or excessively ‘soap opera’-like.

It’s pleasing to discover, too, that the IPS panel at the 47L7453’s heart helps the richness of its colour response bear up better than usual if you find yourself having to watch from down the TV’s sides rather than directly opposite.

However, while proponents of the IPS format always make much of this viewing angle benefit, they neglect to point out that vertical viewing angles before contrast reduces drastically are very limited.

Plus, as regular readers of our TV reviews this year will know, the current generation of IPS panels can struggle with contrast compared to other types of LCD TV. A trend not bucked by the 47L7453.

Its contrast problems are two fold, starting with the simple fact that IPS panels don’t seem able to produce as deep a native black level response as other types of LCD panel. Turn off all the processing on the 47L7453 associated with boosting contrast and black level and put on a dark scene, and you’ll see any parts of the image that should be dark or even black instead looking misty and grey.

Combatting these washed out blacks involves reducing backlight levels, activating the 47L7453’s adaptive backlight feature, and also potentially activating the Scene feature which, as mentioned earlier, reduces the image’s intensity a bit and improves black level response in the process.

However, these tools for improving black level response have to work so hard that they can distract you from what you’re watching. For instance, the adaptive backlight system can cause overt ‘jumps’ and shifts in the image’s overall brightness level as the content you’re viewing shifts between different levels of brightness – especially when you’re watching a film with lots of dark content.

As for reducing the backlight, as noted in the set-up section we had to knock this back to below its 50 per cent level before black colours started to look convincing. While the impressive brightness of the 47L7453’s pictures meant images still had more punch to them than you might expect after reducing the backlight by so much, it has to be said that post calibration dark areas of the picture looked slightly hollow thanks to shadow detail being crushed out of the picture.

One final point worth reiterating here is that the TV doesn’t really work like we’d expect a direct backlit TV with local dimming to work. In fact, it’s hard to see much evidence of the local dimming at all, with the whole screen tending to shift brightness intensity in response to content changes rather than just local areas within the frame. The upside to this is that you don’t have to worry about obvious light ‘haloes’ around bright objects that appear against dark backdrops – a problem with most direct LED sets that use local dimming. The downside is that black levels don’t get as dark as we’d usually expect to see with a locally dimmed direct backlight array.

As noted earlier, the contrast issues noted with the 47L7453 characterise almost all IPS LED TVs we’re seeing this year. But in fairness we must stress that some of the problems will only bother you if you’re watching a very dark movie scene in a very dark room. With normal sorts of TV content in typical living room conditions, the only contrast issue that will likely remain an issue is the crushing out of shadow detail in dark areas.

It’s also fair to say that the striking colour and brightness attributes of the 47L7453’s pictures join the IPS wider viewing angle support in being particularly well suited to daytime TV viewing in a typically bright family living room. So if that sounds more ‘you’ than watching films with the lights off, the 47L7453 is an unusually well-qualified option.