At last year’s IFA Toshiba unveiled a new processing system for its LCD TVs called Resolution+, which uses the Cell Broadband Engine (developed by Sony, Toshiba and IBM and as sported by the PS3) to upscale standard definition sources to ‘near hi-def’. The company says 99 per cent of programmes broadcast in the UK are in standard definition, and therefore Resolution+ offers a way of boosting the quality of those programmes in order to narrow the gap between SD and HD material.


Although we questioned Toshiba’s strategy when the technology was announced at IFA – talking about the prevalence of SD and the move towards 4k TVs in the same breath – we can certainly see the logic in this new technology. After all, it’ll be a while before free-to-air HD content is widely available, and standard-def DVDs are still most people’s movie media of choice – all of which means there’s plenty for this new tech to get its teeth into. 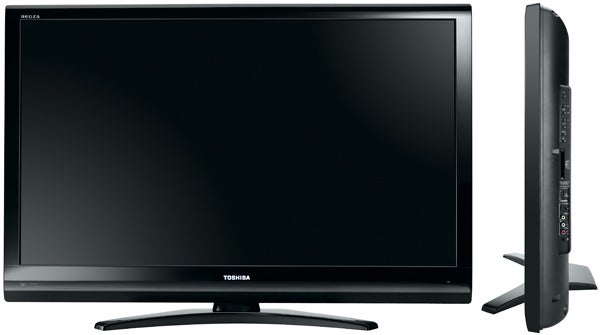 What’s less logical is why Toshiba is billing this as ‘the first ever upscaling TV’ when all hi-def TVs have to upscale SD content in order for it to match the screen’s resolution. But what sets Resolution+ apart from other upscaling systems is the enormous processing power offered by the Cell chip, which applies complex algorithms to the incoming signal in order to sharpen up edge detail and enhance the overall image.


The technology débuted in Toshiba’s XD-E500, standalone DVD player, where it failed to win us over but now Resolution+ is being used for the first time in a TV inside the company’s REGZA ZV series, and lo and behold we’ve got our hands on the 46in version from that very range, giving us the chance to assess the worth of the tech without the need for a DVD player.


From an aesthetic perspective, the 46ZV555D isn’t a radical departure from previous Toshiba TVs, but that’s not necessarily a bad thing – the gloss black bezel and boomerang-shaped swivel stand look as sumptuous as ever, while the illuminated Toshiba logo below the screen is a lovely touch (and you can turn it off if it gets too distracting).


The 46ZV555D is equipped with a satisfying array of connections. You get three HDMI inputs – two on the rear, one on the side – which is the minimum you should expect these days, while the component and twin Scart sockets provide further input options.


These are joined by a D-Sub PC input on the rear, analogue and optical digital audio outputs, audio inputs for the component and PC inputs and a subwoofer output. Transient connection needs are served by the S-video, composite and stereo audio inputs on the side panel, and the common interface slot lets you add pay TV channels to the standard Freeview line-up.

It’s pleasing to discover that in terms of features, Resolution+ is merely the tip of a rather magnificent iceberg. Supporting the headline act is Active Vision M100 HD, the all-singing, all-dancing version of Toshiba’s original picture-boosting technology, which throws blur-reducing 100Hz processing into the bargain.


The feature list also includes a 1,920 x 1,080 resolution and a 5:5 pulldown mode for judder-free 24fps Blu-ray playback, plus other Toshiba stalwarts like Wide Colour Gamut, x.v.YCC colour space support, Active Backlight Control, Auto Contrast and the sensational ‘Full Power Down’ feature – a.k.a. the off switch. The contrast ratio is quoted at an extraordinary 30,000:1 (courtesy of the Dynamic backlight mode) and brightness is 500cd/m(sup)2(/sup). On the audio side, SRS WOW is on hand to expand the stereo soundstage. 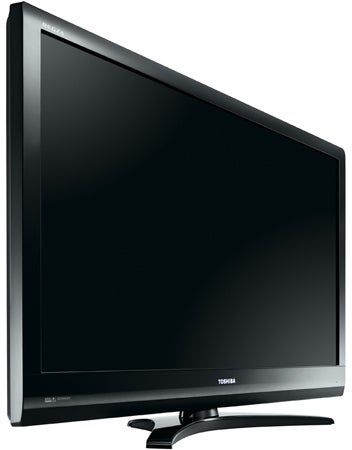 Those who like to tweak the picture to perfection will find a reasonable amount of stuff to play with, ranging from the basic colour, brightness and contrast settings to the more advanced Colour Temperature and Base Colour Adjustment, the latter allowing you to set the levels of individual tones. There’s also a range of presets to choose from, including a Game mode that delivers a more natural picture when playing PS3s, Xbox 360s and the like.


We’re big fans of the user interface, which makes the 46ZV555D extremely pleasant to use. The options are well structured and crisply presented, and we like the way the boxes drop to the bottom of the screen when selected, allowing you to see the results of your tweaking straight away. The whole thing is controlled using a brilliantly intuitive and clearly labelled remote. 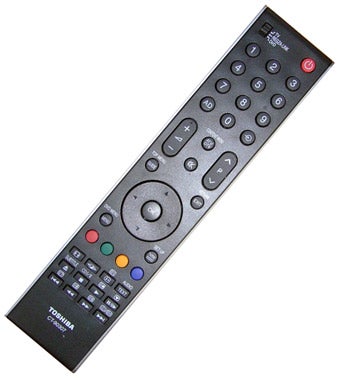 But the big question is: does Resolution+ live up to the hype? It certainly does. The extent of its picture boosting benefits isn’t initially clear, but once you start turning it on and off in the setup menu you can really see how much difference it makes. With pictures from the built-in Freeview tuner or 576p DVD images, Resolution+ instantly throws everything into sharper focus, making edges look cleaner and more pronounced and improving the clarity of fine detail. It’s most clearly demonstrated by the scrolling text and graphics on Sky News – the words are more focused and steady, plus the detail on the newsreader’s face suddenly become a lot more prominent.


We also tested out the deck’s upscaling with the Silicon Optix Benchmark disc (played via Scart from a non-upscaling DVD player) and the tricky test patterns highlights just how good its upscaling is – there are absolutely no jaggies on the rotating bar pattern, even when the diagonal lines reach the most acute angle, plus fine detail is crisply resolved and it handles the flapping flag clip with all the skill and smoothness of a good upscaling DVD deck.

Resolution+ has five levels and the improvements are obviously most visible in the highest 5 setting, but even at 2 or 3 image clarity is greatly improved. It’s worth pointing out that the technology can’t be used for all sources, as the set sensibly disables it when you’re watching hi-def material, which means that the processing isn’t applied to sources that don’t need it. It’s also worth pointing out that it doesn’t apply the processing to ‘inactive’ parts of the screen, which we thought would be a problem (particularly with football, where the sharpness of grass is an integral part of the HD experience) but since it can’t add detail that isn’t there in the first place, you’re not really missing out.


We also tried it out on the notoriously poor-quality TMF channel and although it can’t work miracles (or do anything about the rampant block noise) Resolution+ does make music videos look more clearly defined. On the downside, Resolution+ isn’t always great at distinguishing between picture information and noise. as a result it sometimes emphasises artefacts in the original source, such as the smudgy mosquito noise surrounding moving objects and text. While we’re impressed by what the technology can do, the results are nowhere near as sharp as real high definition. 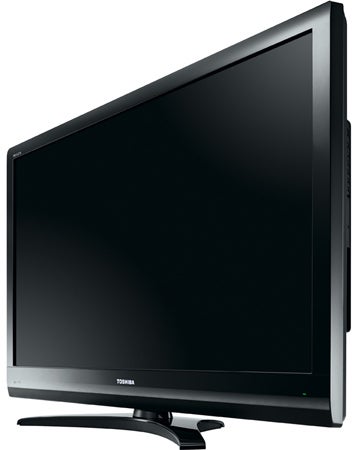 Other aspects of the Toshiba’s standard definition performance are impressive, such as the clean, radiant colours and lack of motion blur, but what stops it blowing our socks off is that dark areas of the screen exhibit a fair amount of misty noise that compromises the depth and punch of certain scenes, while black levels are good rather than great.


But hi-def material is another story. ”Wall-E” on Blu-ray looked absolutely sensational, with the abundant detail of the litter-strewn city rendered with phenomenal sharpness, plus the picture has pleasing depth and three-dimensionality. But it’s not only crisp CG that comes up smelling of roses – live action stuff like ”Indiana Jones” looks equally crisp and natural, and blacks seem much better too.


If you’re not in the mood to switch on your surround sound system, then movies are still in safe hands. The sound on offer is richer and more powerful than you’d imagine from the slim under-screen speakers, with clear dialogue and an expansive soundstage courtesy of SRS WOW.


The 46ZV555D boasts terrific performance and a comprehensive feature list, which makes it feel like a real bargain – particularly when you consider that similarly-specified 46in sets from the likes of Sony and Pioneer cost a lot more. Resolution+ makes a very worthwhile addition to Toshiba’s enviable arsenal of picture processing technology, and although calling the results ‘near hi-def’ is a bit generous, we can’t deny that it does a fantastic job of upscaling and sharpening standard definition material. When combined with the rest of Toshiba’s picture processing, it delivers satisfying SD pictures albeit with one or two caveats. Not to mention superb quality hi-def pictures and sound.