When most people talk about slim TVs these days, they’re referring to the upcoming trend towards ever-skinnier rear ends. But when Toshiba talks about the slimness of the 46XF355D, it’s not talking about depth but width.


For this is the second TV we’ve seen from the brand (following the 40in 40XF355D back in early December) to sport Toshiba’s striking Picture Frame design, whereby the bezel around the screen is a mere 23mm across. The result is that the 46in 46XF355D occupies around the same space as many standard 42in screens.


You can get some sense of just how striking an effect this impressive achievement has from the pictures in this review. But the impact of the skinny bezel is even more striking ‘in the flesh’, and looks even more remarkable wrapped around the 46XF355D’s bigger screen than it does on the 40in model. 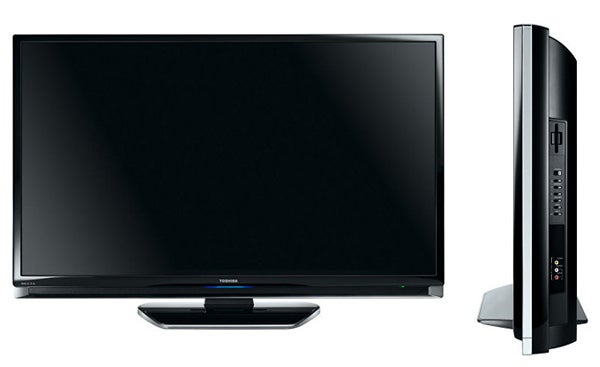 This really is the closest thing yet to that apparent manufacturer Holy Grail of the ‘completely invisible TV’, where the only thing you see is the picture. And we have to admit that the effect really is gorgeous.


Unlike one or two actresses we can think of, though, the 46XF355D doesn’t get by on looks alone. For instance, it’s also prodigiously well connected, with three v1.3a HDMIs dominating proceedings (two on the rear, one down the side). And as you’d expect of v1.3a-type HDMIs, they all can receive those ultra-pure 1080p/24 HD images so beloved of the Blu-ray owning fraternity, and Deep Colour from any sources that support it (JVC and Panasonic’s latest HD camcorders, for instance).


Elsewhere there’s the inevitable component video input to help the TV earn its HD Ready wings, a digital audio output for outputting 5.1 sound received via an HDMI or Freeview broadcast, a D-Sub PC port, plus all the usual SCART, S-Video and composite fallbacks for anyone daft enough not to stick with the higher quality alternatives.


Perhaps the single most unusual jack, though, is a subwoofer line-out; there so that bass heads can ramp up the TV’s audio rumbles by adding a separate low-frequency speaker.


We mentioned earlier that the 46XF355D can receive 1080p images, so you’ll be pleased to know that it also sports a full HD native pixel count of 1,920 x 1,080 for presenting 1080-line sources with maximum integrity. To further support this, the TV carries an Exact Scan aspect ratio that can show 1080-line sources without any overscanning applied.

Other characteristics of Toshiba’s Picture Frame 46incher include a standard brightness claim of 500cd/m2 and a high-looking contrast ratio of 10,000:1, achieved with the help of the inevitable dynamic backlight, whereby the TV’s brightness output is reduced when dark scenes are detected to boost black level response.


As with all of Toshiba’s latest flat TVs, meanwhile, the 46XF355D benefits from the brand’s latest Active Vision LCD picture processing system, with its focus on improving colour tones and saturations, sharpness, motion handling and contrast. It’s a pity, though – not to mention a bit odd – that the Active Vision system featured does not include the 100Hz element found on Toshiba’s flagship Z series of flat panels. It’s no surprise to learn, therefore, that later this year Toshiba will be launching a series of ‘ZF‘ Picture Frame models which put the potential 100Hz oversight right. 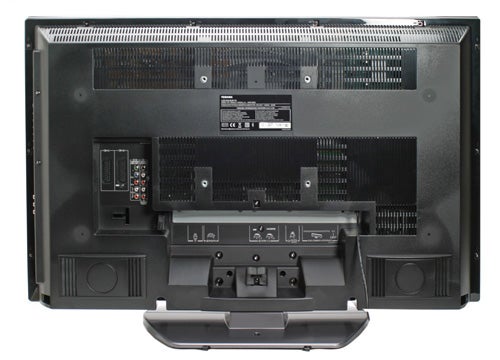 Other bits and bobs of interest tucked away inside the 46XF355D’s rather tired-looking onscreen menus include 3D colour management, allowing you almost infinite fine-tuning of the TV’s colour palette; MPEG and standard Noise Reduction systems; a black stretch processor; and the SRS WOW audio-boosting system delivered via speakers designed by Onkyo.


So far Toshiba’s latest LCD range has been quite bizarrely inconsistent in performance terms, to the extent that we’ve seen different screen sizes from the same series of TVs deliver widely differing picture quality results. And that peculiar trend continues with the 46XF355D, but thankfully in a good way, as it seems to perform at least a bit better than its 40in sibling.

The reason I say this is that during a run-through of ”Braveheart”, recorded in HD from Sky HD, the set delivers black levels which, while certainly not spectacular, do seem markedly darker than those seen on the 40XF355D.


The scene where Wallace is visited at night by the French princess thus appears noticeably less ‘flattened’, washed out and misty, and the picture in general looks slightly more dynamic.


This black level boost is enough in itself to elevate the 46XF355D’s pictures from the ‘solid’ position of its smaller sibling to definite ‘good’ territory – especially when you take its other strengths into account.


Leading these other strengths out is a terrifically vibrant colour palette that does spectacular justice to the lush greenery of the Scottish Highlands, and the sumptuous finery of the English royal family’s opulent robes. Yet the set also does a better job than many rivals of producing skin tones that actually look like skin, rather than some sort of fruit rind or waxwork dummy.

HD images also look almost preternaturally sharp, with genuinely staggering amounts of fine detail on display. For instance, as the body of Wallace’s father is carried towards the family home, I felt like I could make out every single blade of grass in the field the cart is crossing.


Unlike with one or two different sets in Toshiba’s latest range, I also found myself relatively untroubled by LCD’s common motion blur issue. Sure, there’s a modicum of resolution loss as objects cross the screen, but actual smearing is kept to a minimum. This means that the general sense of sharpness remains even during ”Braveheart’s” frenetic battle scenes.


As well as the fact that the 46XF355D’s black levels, while improved, could be better still, the set’s picture score is also dented by the way it suffers rather badly with LCD’s viewing angle issue. And so if you sit at any more than 35-40 degrees from straight on to the screen, both the picture’s colour saturation and black level response drop off dramatically. 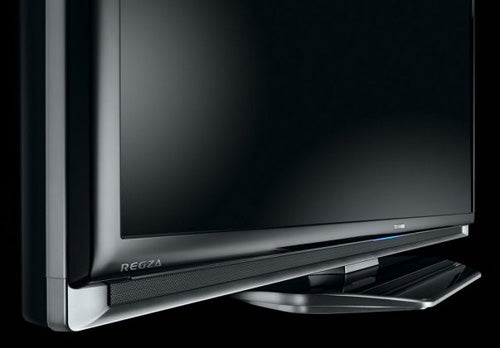 The other niggle is a familiar one with Toshiba’s latest flat TV range, and concerns the handling of standard definition material. The set just doesn’t manage to upscale Freeview or Sky standard definition images to its full HD resolution as successfully as it might, leaving picture noise looking slightly exaggerated.


When it comes to sound, the 46XF355D’s abilities are actually better than expected given how incredibly small the TV’s tiny bezel requires the speakers to be. Treble effects are clear, voices sound credible, and the mid-range remains largely distortion-free even during the opening landing sequence of ”Saving Private Ryan”.


However, the soundstage is a little narrow, and perhaps inevitably there isn’t much bass to give soundtracks that cinematic feel, making that subwoofer output well worth exploring. Provided, of course, that you can be bothered to partner your self-consciously unobtrusive TV with a ruddy great bass speaker…


Even though I haven’t used ”Forrest Gump” as a test movie on Toshiba’s 46XF355D LCD TV, I have no choice but to conclude the review by saying that assessing a current Toshiba TV is like a box of chocolates: you never know what you’re going to get.


The good news is that today, while we might not quite have a Guylian Belgian Chocolate Seashell on our hands, we do at least have the equivalent of a purple-wrapped hazelnut in caramel Quality Street job.