Toshiba’s first TL models, such as the Toshiba 46TL963,
were as close as the TV world gets these days to a smash hit. And it
was easy to see why. They combined a good feature count (including
active 3D) with a fashionable ultra-slim design, good picture quality
and most importantly of all, a remarkably aggressive price for what they
had to offer.

The new TL generation, though – the TL968 range – didn’t get off to a particularly great start, with the 40in Toshiba 40TL968B
suffering with distracting backlight inconsistencies during dark
scenes. However, we’ve seen enough TVs in our time to know that a
problem for one size point in a flat TV range might not affect a
different sized screen in the same range. So we’re still hopeful that
the 46in 46TL968 will reignite our old love affair with Toshiba’s
mid-range option. 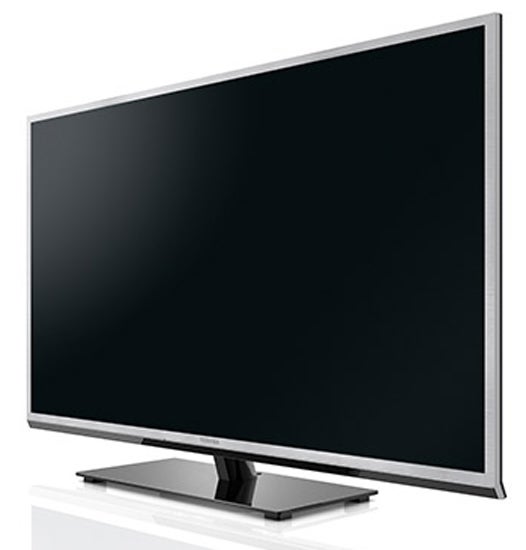 
The set looks the part, at any rate. Its frame is still slim – only a
little over 1cm across – and it enjoys an unusual matt finish and
fetching light silver colour. Its rear is trim too, with the whole
package adding up to a design that looks far more opulent than anything
you’d expect to see on a £550 TV – despite the frame feeling a tad
plasticky if you get within prodding distance.

Toshiba 46TL968 – Wi-Fi and other Connectivity

The
46TL968’s connections are very good, underlining the set’s value
appeal. The most striking option is built-in Wi-Fi – something that’s
been conspicuously absent from previous Toshiba TV generations, even
those models that support online features. The Wi-Fi here can be used
for either exploring Toshiba’s ‘Places’ online platform, or for
accessing files – a touch clumsily – from networked DLNA devices.

Other
key connections include four HDMIs (as many as you get on many high-end
TVs), plus two USBs you can use for playing back video, photo and music
files from USB storage devices, or for recording to USB HDDs.

Despite
its affordability by 46in LED TV standards, the 46TL968 contains both a
Freeview HD tuner and an HD satellite tuner – though this latter tuner
doesn’t come with Freesat HD ‘packing’, and so is going to be of limited
interest/use to your average UK telly watcher.

The
46TL968 uses an edge LED lighting system to illuminate a full HD,
native 100Hz LCD panel, and adds backlight blinking to up the ‘virtual’
refresh rate to 200Hz. Also present is active 3D playback (unlike the
recently reviewed 55WL968, there’s been no shift to a passive 3D
system).

Toshiba hasn’t included any active 3D glasses for
free with the TL968 models. This will aggravate some, no doubt, but with
Joe Public remaining broadly indifferent to 3D at home, there will also be
plenty of people reading this who think Toshiba has done the right thing
by not pushing the 46TL968’s price up by including ‘free’ pairs of 3D
glasses. 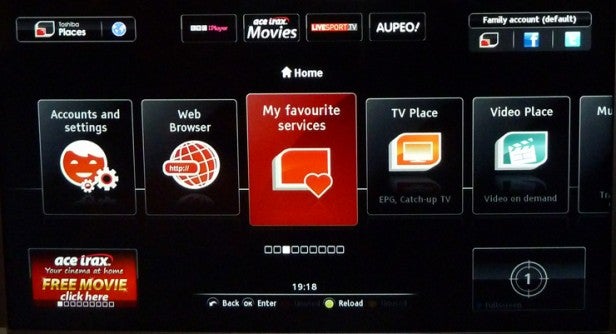 As
noted earlier, the 46TL968 supports Toshiba’s Places online platform.
This is a good looking online system, and its use of various ‘folders’
for different types of content could come in handy should Toshiba
significantly ramp up its online content in the coming months and years.

Right
now, though, the folders almost feel like an unnecessary barrier to
quickly accessing the rather small bounty of content currently available
on the Places network. Interesting stuff so far as we’re concerned is
restricted to Blinkbox, Acetrax, the BBC iPlayer, YouTube, LiveSport.tv,
iConcerts and, to a lesser extent, Facebook, Skype and Twitter apps.

The
lack of Lovefilm and/or Netflix apps is especially unfortunate, and
more content generally is needed to put Places anywhere near the level
offered by the online services from Panasonic, Sony, Samsung, and LG.

Used as the main TV for the review period
Tested for more than a week
Tested using industry calibrated tools, discs and with real world use
Tested with broadcast content (HD/SD), video streams and demo discs
Next
Set up and Picture Quality Review