When Toshiba decides it’s going to make a high-value product, it usually means business. With the possible exception of Samsung, we’d argue there’s no other brand right now able to consistently achieve such a good balance of performance and features on extremely aggressively-priced TVs.

With this in mind, we’re pretty psyched about Toshiba’s 46TL868. For as Toshiba happily admits, this new 46in set was designed from the ground up to deliver a premium design and active 3D on a budget to a cash-strapped but enthusiastic Christmas/New Year marketplace.

The ‘premium design’ is predominantly based on the extreme slenderness of the 46TL868’s bezel. Its top, left and right edges protrude barely 1cm beyond the edges of the screen. As well as looking very cool, this ultra-slim bezel ensures the TV can comfortably fit into the same space as a typical 42in TV. And not having much bezel to see seems to focus your attention on the picture more, too. 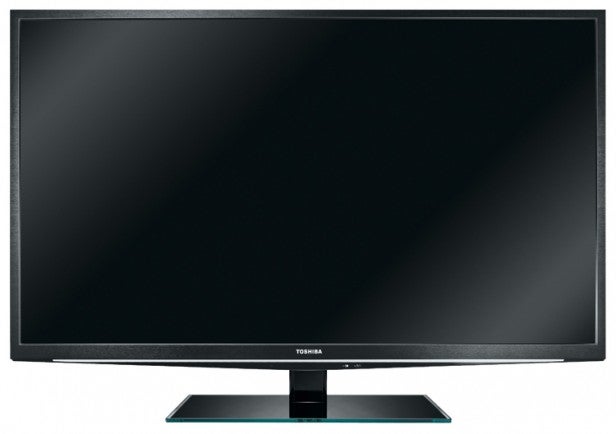 The slightly ‘grained’, matt finish to the bezel might not be to everyone’s tastes, perhaps, but we find ourselves quite taken by it. If only, perhaps, because it’s something a bit different from the high-gloss norm.

When it comes to connections, there’s some immediate bad news in that most of them face straight out of the TV’s rear, making the set a potentially tricky wall-hanging option. However, in terms of number of connections, Toshiba’s set is up there with TVs costing three times as much. Four HDMIs are on hand for HD and 3D duties, for instance, while the set’s multimedia ‘skills’ include two USB ports able to play video (including DivX HD), photo and music files, and a LAN port through which you can stream files from a networked DLNA PC or access Toshiba’s ‘Places’ online service.

There are also RF and satellite LNB inputs, though since the satellite feed isn’t backed up by Freesat ‘packaging’, most people will be left with the RF tuner. So it’s nice to find that this is a Freeview HD affair, not just a standard definition one.

The Places online service has been a bit frustrating thus far in 2011. For while we’ve admired the look of its interface and its attempt to deliver a ‘personalised’ service able to adapt to the preferences of different users, it just hasn’t had enough content. 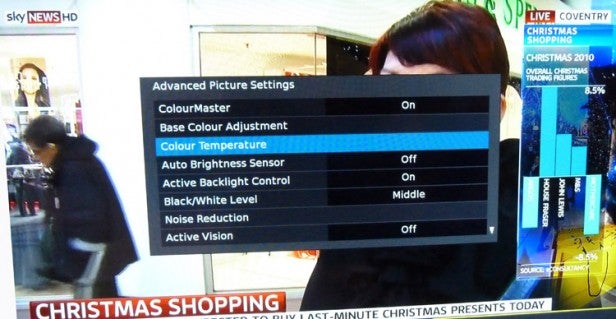 While the new additions are welcome, though, Toshiba Places continues to lag behind the content levels of rival platforms. So here’s hoping Toshiba can keep adding new features thick and fast, to put some meat on the mostly impressive bones of its interface.

Despite being extremely affordable for an active 3D TV, the 46TL868 is reasonably well stocked with picture features. It claims a 200Hz system for a start, plus you can adjust the backlight as well as the normal contrast and brightness settings.

There’s also a ‘colour master’ system that allows you to tweak the hue, saturation and brightness of the red, green, blue, yellow, magenta and cyan colour elements, as well as the overall red, green and blue levels of the colour temperature.

The Toshiba 46TL868 boasts an inevitable active contrast system – though you can turn this off if you find its machinations distracting. Then there’s an interesting and welcome black/white level adjustment that essentially allows you to adjust the set’s black level/shadow detail balance. Plus, finally, you can adjust the strength of the set’s Active Vision motion processing (we’d recommend ‘off’ or ‘Standard’ – nothing higher).

While the 46TL868 mostly delivers more features than you might reasonably expect, it doesn’t ship with any active shutter 3D glasses. If you want to use the TV’s 3D capabilities you’ll need to factor in £60-£70 per pair of glasses you need. 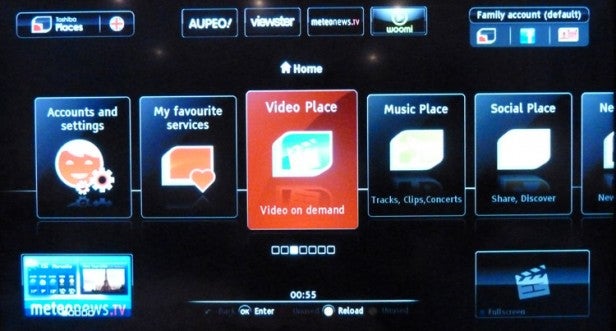 The 46TL868 also, inevitably, doesn’t sport the CEVO Engine processing power that made the flagship Toshiba 55WL863 so impressive. Still, notwithstanding a couple of flaws, there’s actually plenty to admire about the 46TL868’s images.

For a start, they’re exceptionally colour-rich for such a cheap 46in TV. Bright, colourful images really ‘pop’ off the screen, and the range of tones the screen can deliver is a real cut above the budget norm.

There’s a decent amount of subtlety in the colour palette too – so long, at least, as you don’t stick with the overwrought Dynamic picture preset, and calm the backlight and contrast a little if using any other picture preset than the two provided ‘Hollywood’ ones.

These Hollywood settings should deliver, we would expect, the most ‘accurate’ image for movie fans using their TV predominantly in a dark room. But actually we found the Hollywood presets took too much punch out of the picture and worse, left some decidedly odd colour tones, especially where reds and skin colours were concerned. We found a toned down version of the Standard preset produced more balanced and enjoyable results. 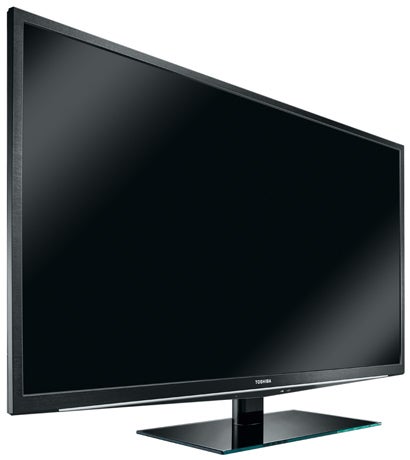 The 46TL868 is also capable of more brightness than you might expect from such an affordable TV – especially given that its average 118kW per annum of power use bags it a grade A energy rating.

Crucially, though, this bright look to images doesn’t come at the expense of a decent contrast performance. Indeed, dark parts of predominantly bright images look impressively black, if a little short of shadow detail.

HD feeds look very sharp too – especially as the 46TL868 proves remarkably assured at suppressing LCD’s still-common tendency to blur and smear motion. This holds reasonably true even if you turn off the Active Vision processing – though personally we preferred to leave it set to Standard, at least while watching TV (as opposed to Blu-rays).

As for the 2D ‘flaws’ mentioned earlier (we’ll get on to 3D in a moment), the first concerns the set’s presentation of standard definition pictures. For while they’re certainly not the mushy disaster often seen on really cheap TVs, they do tend to suffer a noticeable flattening of the colour range. Though on the upside, there’s a reasonable degree of sharpness, and this is delivered without exaggerating MPEG and other noise as much as might have been expected.

The other problem is predictable to anyone who’s seen as many Toshiba TVs as we have this year: a degree of inconsistency in the set’s backlighting. Two distinct ‘jets’ of light sneak diagonally into the picture from each top corner. However, the problems in this respect are neither as aggressive nor as extensive in terms of the amount of picture they cover as they have been on numerous other Toshiba TVs this year. Especially if you keep the backlight output set to its 65 level or less.

It should be added that the backlight inconsistencies might have been more dramatic had the screen not had a slightly blue undertone to its reproduction of black colours. However, while the 46TL868’s performance with dark scenes isn’t particularly great by the standards of the TV world at large, it’s actually above average for its budget segment of the market.

And so we get to 3D. Dutifully donning a pair of Toshiba’s new 3D glasses (rechargeable and much more stylish and light than Toshiba’s previous efforts, but also a touch narrow), we were mostly startlingly impressed by the quality before us.

For a start, the 46TL868’s active 3D pictures are very bright and colourful, which instantly helps them look deeper, punchier and just more fun than those of many other active 3D TVs. 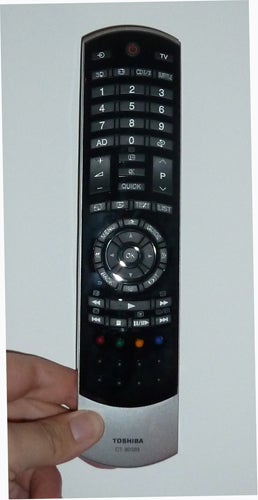 Also impressive is the stunning amount of fine detail resolved by its 3D pictures. Couple this with the total absence of the sort of horizontal line structure witnessed on large-screen passive 3D TVs, and we find it inexplicable why LG and even a few supposedly independent experts still try to argue that passive 3D – with all its own separate advantages – currently delivers the same HD resolution as the active 3D format.

We were also very impressed to find the TV completely untroubled by the flickering issues you can get with active 3D – provided, at least, that you can keep the lights in your room reasonably low.

3D motion is decently fluid too, and again we were impressed by how little resolution is lost as objects cross the screen. Then there’s the small matter of our most hated 3D bugbear of crosstalk. Which is actually handled pretty well by Toshiba’s budget beauty.

Sure, there are obvious signs of it during any 3D image that has a large amount of depth. But it’s not extensive or aggressive enough to keep dragging your eye to it, and nor does it cause backdrops to look out of focus as they can on some much more expensive active 3D TVs.

Actually our biggest problem with the 46TL868’s 3D performance is related to those jets of light shooting in from its top corners. For these can even be seen over quite light footage when the TV’s running at the high brightness levels required for active 3D viewing, and their presence is underlined by the fact that they’re essentially a ‘2D’ artefact lying across the top of a 3D image.

Overall, though, the 46TL868’s 3D performance continues the theme of its 2D images – namely that it’s not only better than it has any right to be on such a cheap 46in TV, but is also better – or more watchable, at any rate – than some TVs costing considerably more. 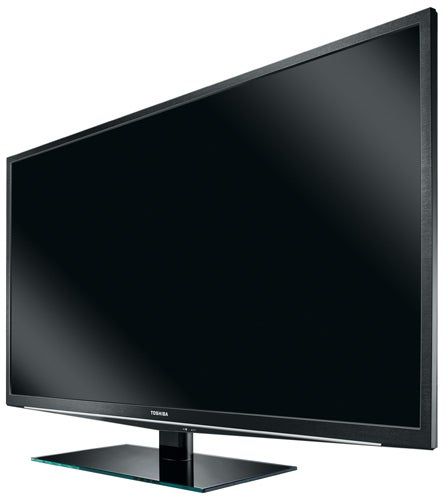 The 46TL868’s price makes it a potentially popular gaming monitor as well as TV. As such, it’s good to find that its input lag measured 40ms during our tests. We did record one rogue lag measurement of nearer 70ms, weirdly, but the other 20 measurements we took only varied between 37 and 40ms.

The 46TL868 is – predictably – on less solid ground with its audio performance. Its acutely small bezel and slender rear really leaves no space for speakers of any significance. As a result, while the soundstage is reasonably clean and clear, it also gets scarcely any bass at all, and there isn’t enough power or range to allow the soundstage to open up to accommodate an action movie scene with any real conviction.

Verdict
Although the 46TL868 doesn’t manage to hide absolutely all traces of its budget focus, it remains a much more enjoyable all-rounder than it really ought to be for so little cash.