The Toshiba 43UL2063DB offers a satisfactory performance for this 43-inch budget priced set. While there are caveats, which include some weak motion handling and a sluggish gaming performance, at £299 it’s a good value for a smaller room.

The Toshiba UL20 (43UL2063DB) is its latest affordable 4K HDR set with support for Dolby Vision.

Toshiba wasted no time replacing its budget-priced U29 set that went on sale earlier in 2020. The UL20 arrives less than six months after the U29, a TV that we praised for its solid performance and feature set.

This review relates to the 43-inch variant in the UL20 line-up, a size that makes it perfect for a second room or a bedroom. Could Toshiba be onto another budget winner?

Design – Virtually the same as the U29

We could repeat what was said about the U29 as apart from a few differences the two sets are virtually alike. 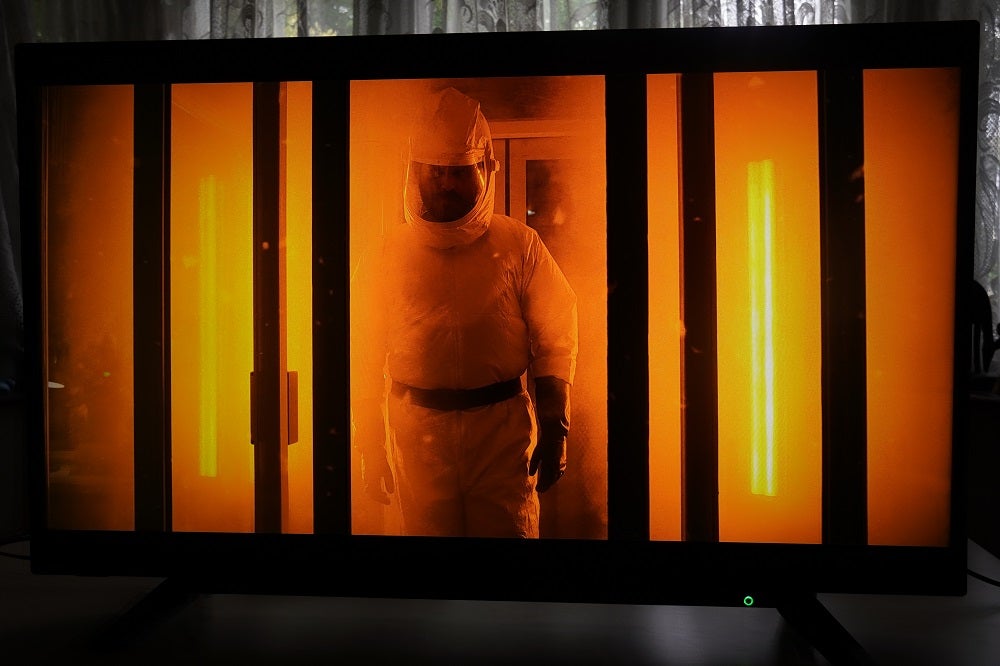 Again the Toshiba 43UL2063DB is less style conscious and more practically minded where build quality is concerned. The chassis is made out of plastic but the quality is decent. It’s not much to look at, but at 43-inches aesthetics aren’t the main concern. If you intend to put the UL20 on the wall, you can do so with a VESA wall-mount (available separately). 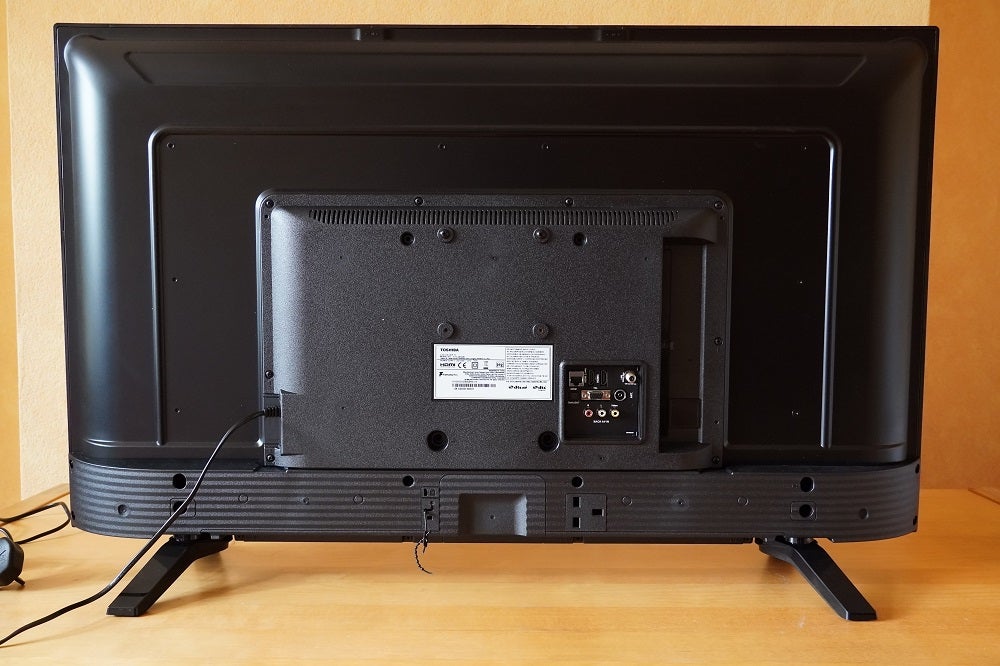 Instructions for assembly are clearer than they were on the U29, with the feet identified as left and right. Attaching them is a simple process and putting the TV together can be done in a matter of minutes. The feet allow for more clearance than on the U29, though it’s not still enough to slot a small soundbar beneath without blocking the IR signal. 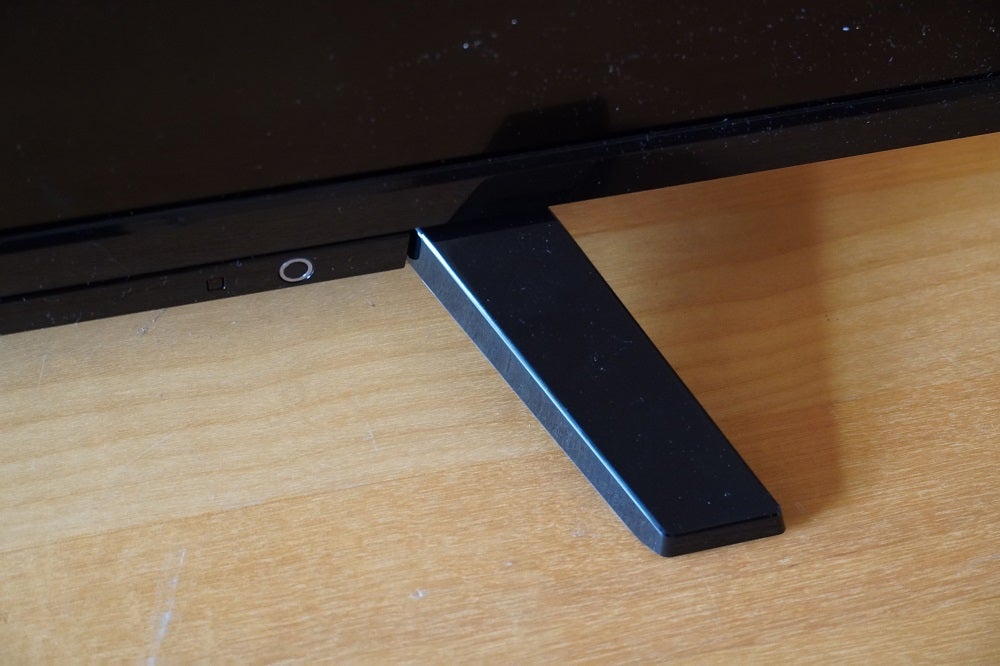 It’s the same remote we’ve encountered on previous Toshiba TVs, which means a big and old-school looking wand with quick access buttons for Prime Video, Netflix and Freeview Play. The TV’s interface is decent, though I do wish Toshiba had included quick access buttons to Settings on the remote instead of directing users to press the Home button and scroll through the rows there. 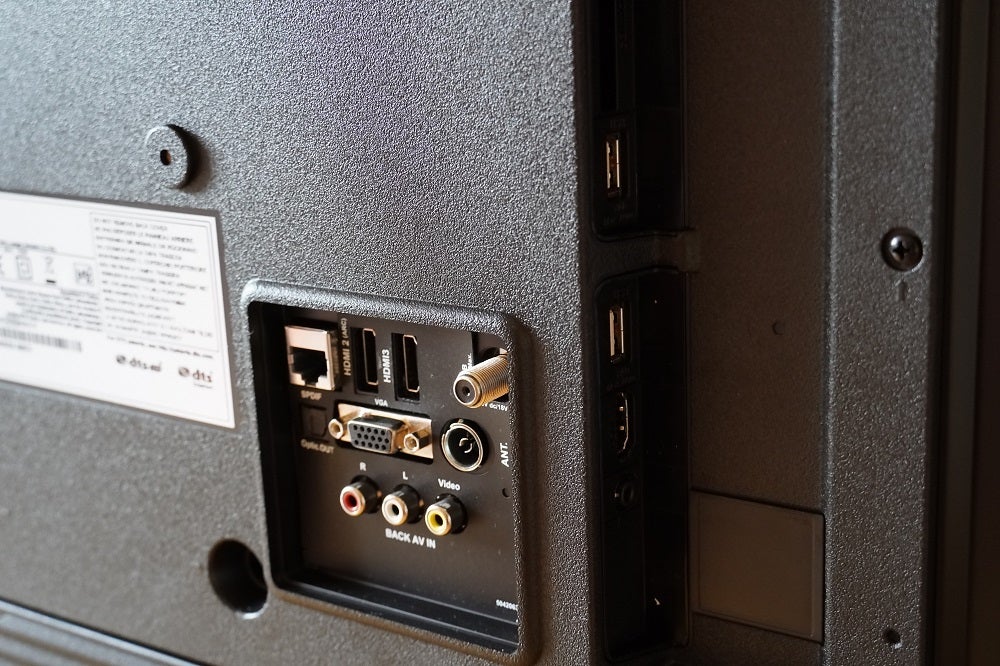 ARC, for passing through sound to an external device, is supported by HDMI 2, while the set also supports the HDMI CEC protocol for controlling connected devices with the remote (it is fairly limited in operation, though).

Nothing has changed in terms of the smart platform with the same streaming and on-demand catch-up apps (iPlayer, ITV Hub, All4, My5, etc). If you’re after Disney Plus or Apple TV, you won’t get those apps unless you purchase a separate streaming stick. Add in Freeview Play and you get 70 TV channels plus 15 in HD.

You get screen-mirroring via Miracast but Toshiba continues to reserve Chromecast for its Android TVs, which aren’t widely available in the UK. The UL20 works with Alexa or Google Assistant voice support through an external Echo or Nest Audio smart speaker. There is also the addition of Bluetooth, which was omitted from the U29.

There’s no wide colour gamut for an expanded colour performance, but you do get HDR10, HLG HDR for broadcasts and the more premium Dolby Vision HDR. Dolby Vision helps a TV’s tone-mapping with HDR, and is especially useful for budget TVs that can’t hit high brightness levels but can at least render scenes with lower levels of brightness in a more capable manner. 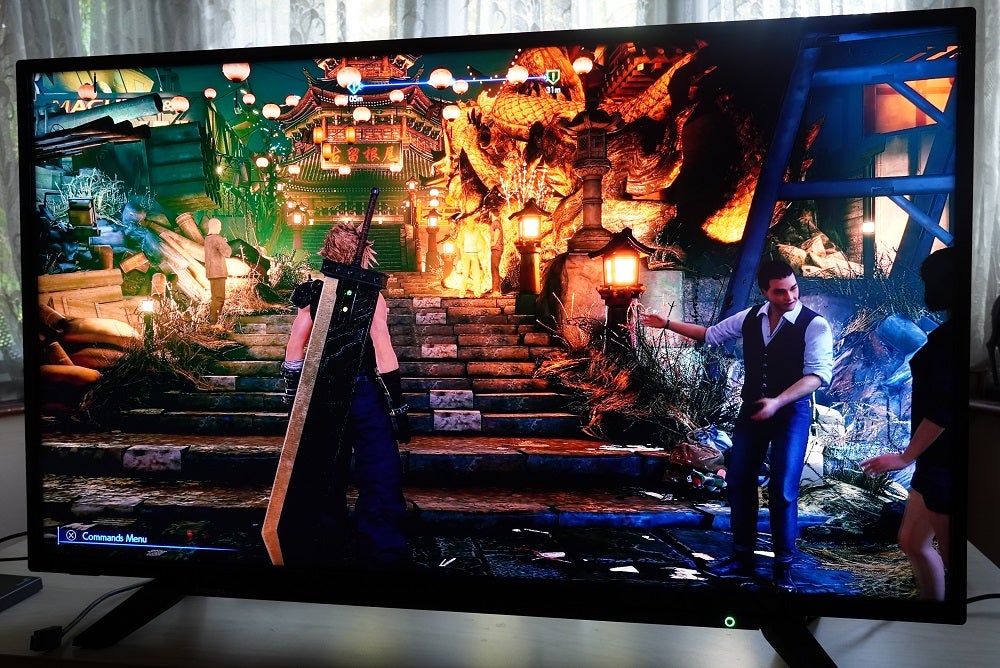 Game mode measured in at a meandering 33.8ms. With Game mode off, the set also measured 33.8ms. You wonder what the point of a Game Mode is if there’s no benefit to be had.

Performance – Compromised but a solid effort at this size

The UL20 continues where the U29 left off, though at this size it’s not without a number of caveats and compromises.

What we do like is that the Toshiba 43UL2063DB has gone for a natural looking presentation, eschewing the saturated colours of the Hisense A7500F. Its images are more subtle and refined rather than punchy and vibrant, but still the right side of expressive. 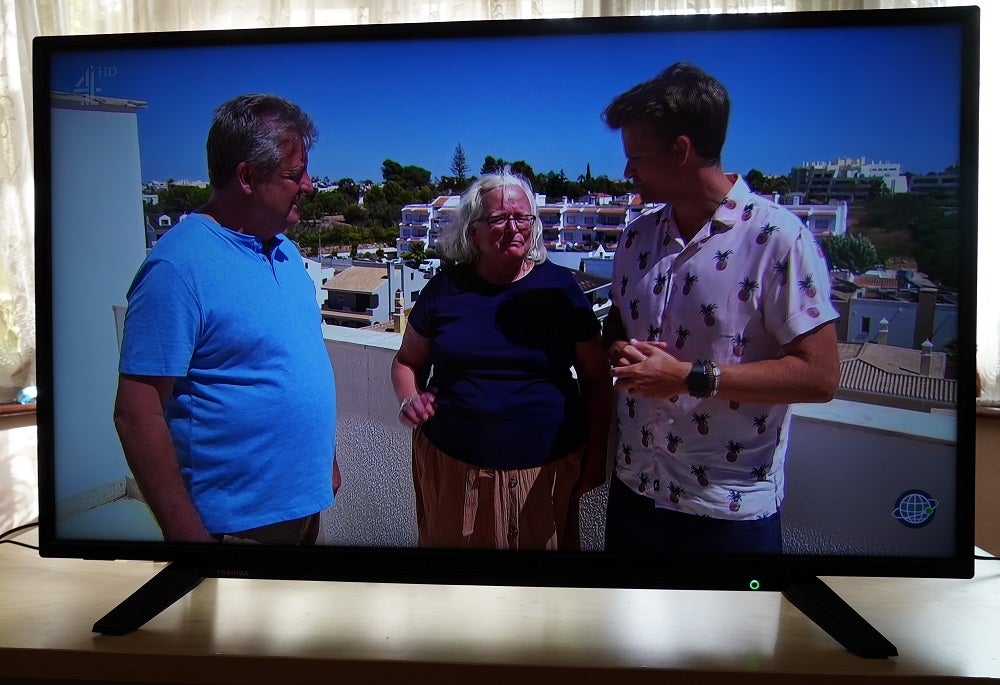 The set’s motion handling is not the strongest though. The Low setting feels best as nudging it higher makes the ‘soap opera’ effect more obvious adding blur, fuzzy definition and jerkiness to movement. If you’re happy with a slight bit of stutter then keep it off entirely.

When it comes to upscaling the UL20 makes a decent fist of upsampling 1080p to 4K. Watching a football match and edge definition of the players is sharp enough: overall clarity and detail is fine, with skin tones healthy-looking and with a slight push to warm looking complexions. SD content is decently handled too, but suffers from rougher-looking faces, less detail and fuzzier definition. That’s not unexpected and at this size it’s still quite often watchable. 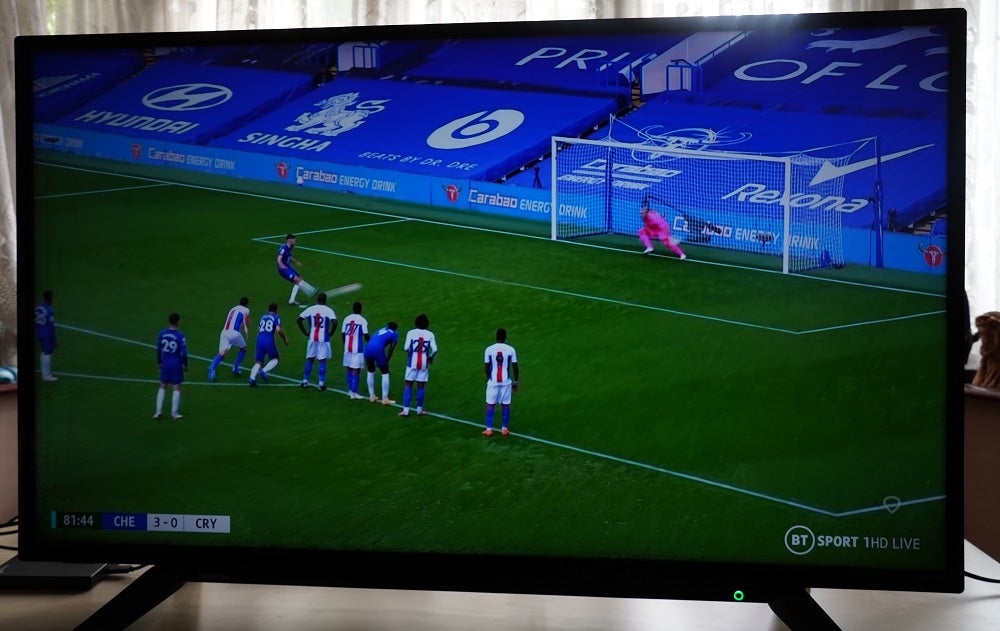 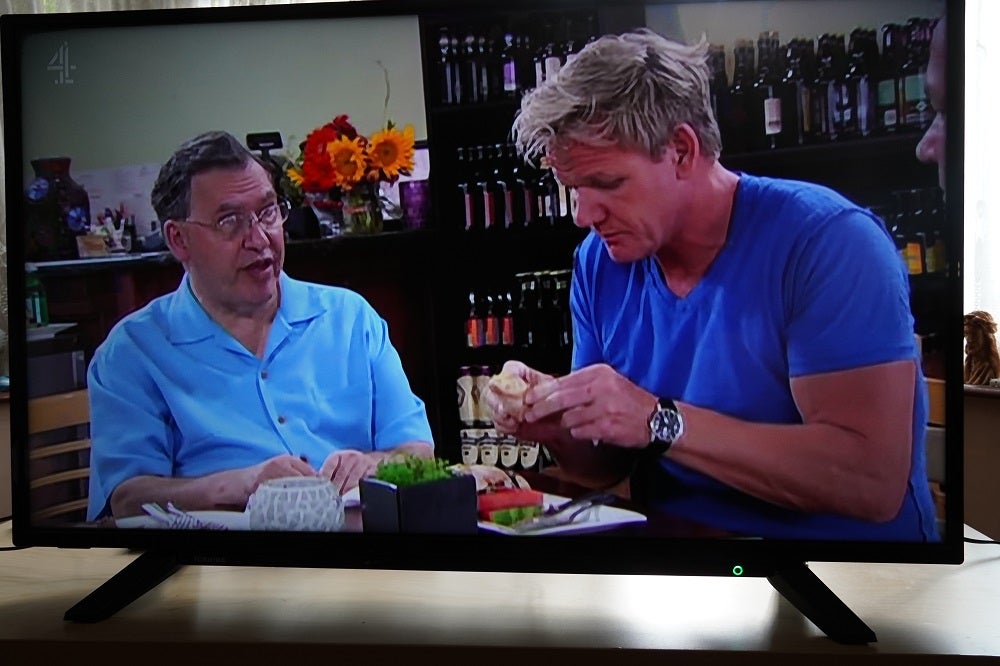 SD content is fairly watchable on a screen of this size

However there is a dimness to proceedings that means content loses a bit of pop, and contrast (or whites) become rather dulled. Watching Edge of Tomorrow on Blu-ray and black levels are fairly middling leaving the darker scenes towards the film’s finale looking murky. 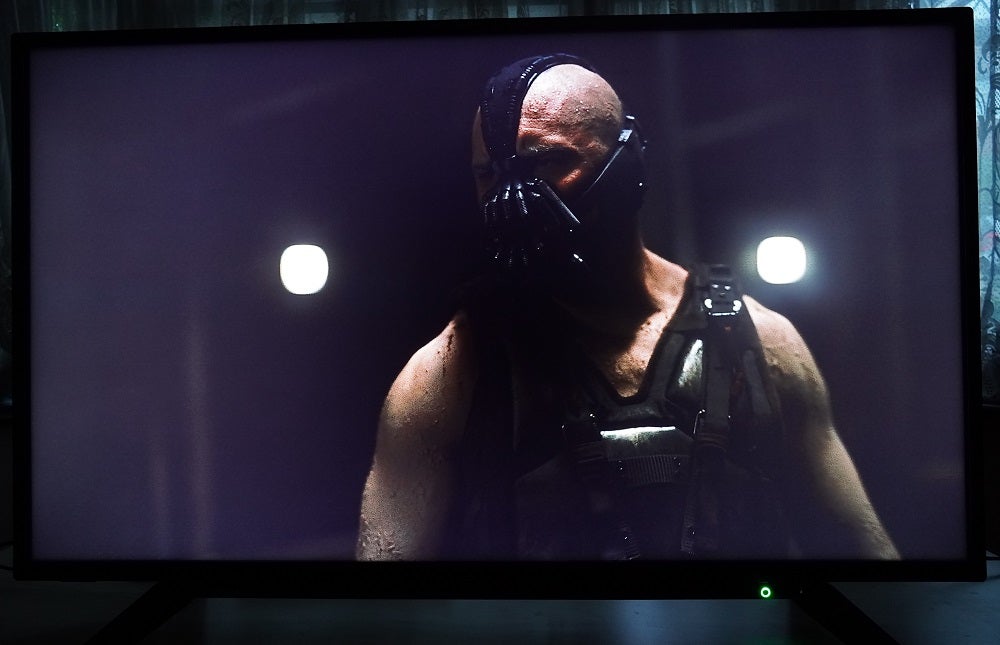 Black levels aren’t portrayed with the strongest of convictions

Dolby Vision provides some benefits, but also highlights some deficiencies too. Motion looks even more artificial with some content, giving a show like Netflix’s Stranger Things an even more unreal look. It’s likely down to your preference for the effect, but it’s not always consistently applied and it’s enough to break the immersion in certain moments. 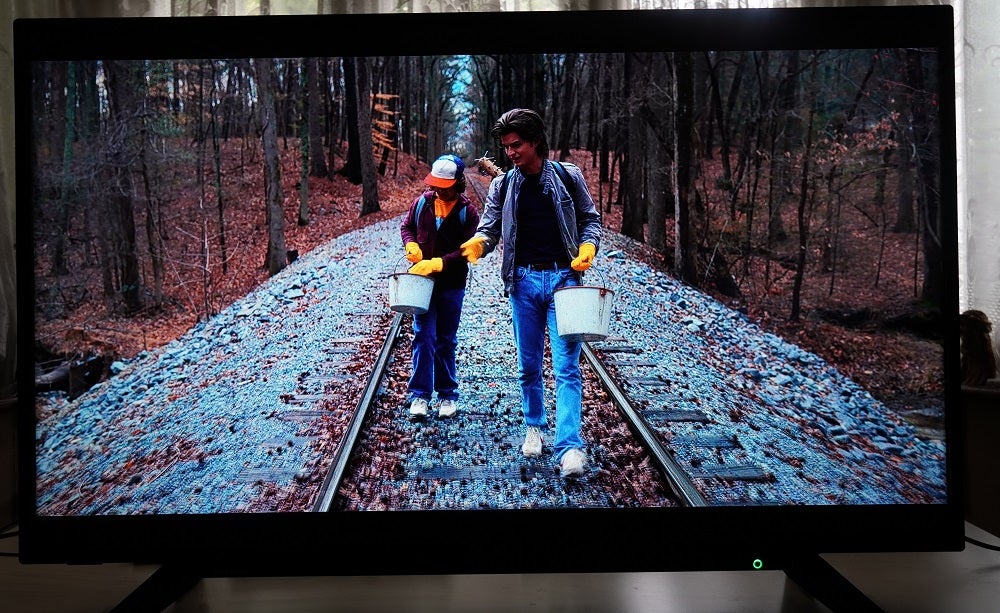 DV does give colours a bit more vim and vigour for a handsome look. The New Orleans of Netflix’s Project Power is treated with more élan, the various powers exhibited throughout more visually potent as a result. 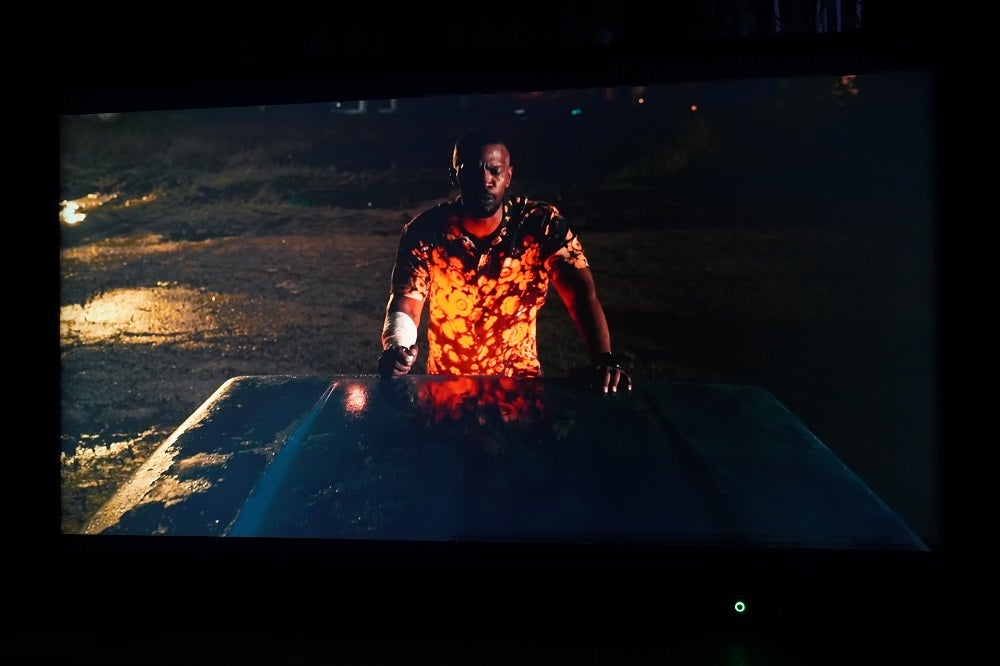 Jurassic World: Fallen Kingdom on 4K DV and while it’s a lusher presentation than its HDR10 counterpart, with the greens of Isla Nublar richer and there’s some more detail in darker areas; there are colour banding issues (shading of colours can look blocky) and the motion can leave close-up shots looking waxy. The HDR10 presentation is not as colourful, but the issues mentioned above are not evident either. 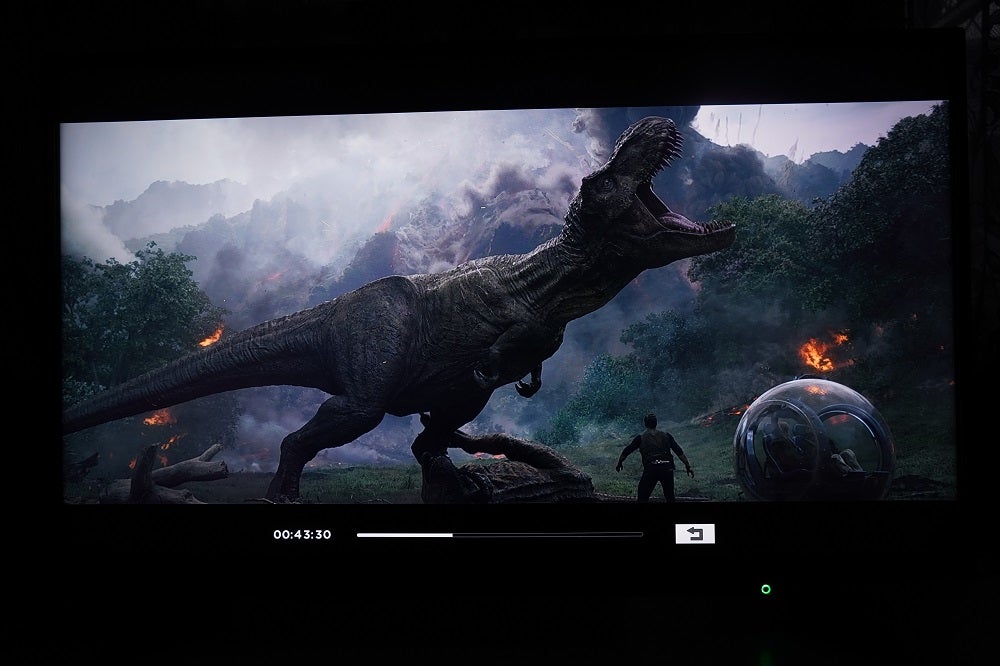 Black levels aren’t improved either with DV as the DLED backlight doesn’t allow for the punch or pop that sells HDR. The scene in 1917 where Blake and Schofield are delivered their mission by General Erinmore in the dimly lit bunker has a distracting greenish tone to it. While there’s some bleed into the black bars above and below with HDR content, the backlight uniformity issues seen on the U29 are not apparent here. 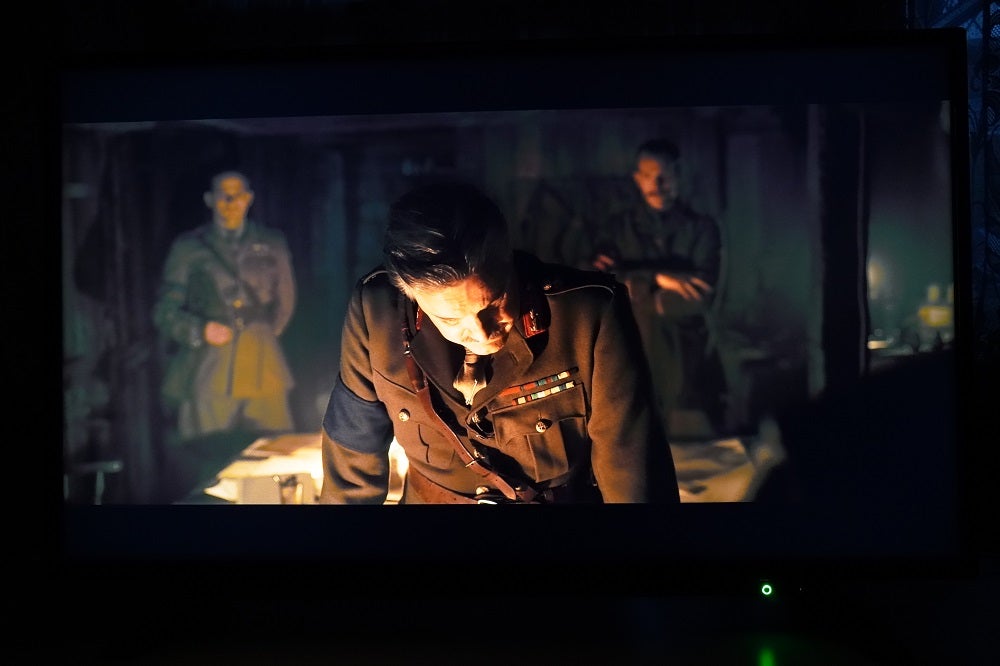 1917 suffers from some greenish blacks in dim scenes

The UL20’s sound is powered by 2 x 10W down-firing speakers and the results are good. While audio isn’t expansive, it avoids the bunched up feel of the A7500F with good vocal clarity with both male and female voices, some decent panning of effects and all-round good sense of intelligibility.

Give it a 5.1 soundtrack and the sound system is not as robust, lacking bass and intensity. While we’d always recommend a soundbar, if the main reason for buying this set is daytime viewing then the TV’s speakers do a serviceable job.

As long as you’re not looking to purchase the Toshiba 43UL2063DB as your main set, then it’s a 43-inch TV that offers good value for its price. There are caveats to its performance, but they’re rather predictable due to its size. It’s unlikely these issues will matter as much to those looking for a second set for a smaller room, study or bedroom.

It’s not going to do all Hollywood films or HDR content massive justice, but for daytime TV and streaming services it’s a good performer, and at £299 it’s more affordable than efforts from LG, Panasonic and Samsung.

The audio performance is a particular strength, with Freeview Play and UK catch-ups adding some more value. Gaming performance is weak making this a less appealing TV to the bedroom gamer.