The 42L7453DB is a mixed bag with 3D. The key passive 3D benefit of no flicker remains intact, and it’s great to see so little of the screen’s brightness and colour richness being lost when you don a pair of the passive glasses.

Detail levels are high for the passive format too, and the relative smallness of the screen also means you don’t really see the jaggedness around bright edges that can affect larger passive 3D screens.

However, the 42L7453DB’s 3D images are also more prone to crosstalk ghosting noise over bright background objects than many passive 3D TVs. What’s particularly odd about this is that the ghosting seems for the most part to be fairly localized to the left side of the screen, reminding us of similar localized crosstalk witnessed on some of LG’s TVs this year.

The 42L7453DB struggles a bit with motion when showing 3D too. Even with the 3D Judder Cancellation feature active rapid motion can take on a rather billowy quality. The Scene mode can reduce this, but instead you’re left with some quite distracting haloing and flickering processing artefacts.

One other flaw noted with 3D is the potential for lip-sync errors to creep in for some reason.

While it doesn’t set any new standards, the 42L7453DB’s audio is better than you might expect from its slender frame. The Labyrinth speaker design definitely helps the set produce a more expansive, better rounded mid-range than we’d typically hear from such a slim set – something that helps it handle dialogue very effectively while giving action scenes room to expand into, so they avoid the flat, insipid feeling associated with many thin TVs.

Really deep bass can sound a bit boxy, really dense trebles can sound a touch harsh, and the soundstage doesn’t spread far beyond the physical confines of the TV chassis. Plus there are the 3D lip synch issues noted earlier. But still the 42L7453DB’s audio is comfortably above average overall.

If you’re considering attaching a games console to the 42L7453DB, we have seriously good news. Our tests revealed the 42L7453DB to suffer with under 20ms of input lag when using its Game preset – one of the lowest measurements we’ve ever recorded. So your gaming should be completely unaffected by any delays in pictures being reproduced on the Toshiba’s screen. 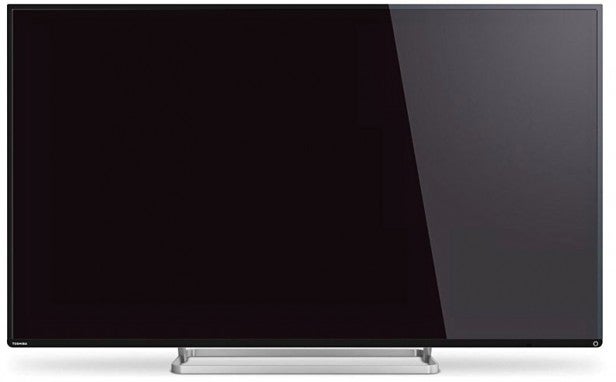 If you’re looking for a mid-sized TV to go into a fairly or very bright room, the 42L7453DB is a great option thanks to its extreme brightness and colour potency. Perhaps unsurprisingly the set struggles to contain this extreme brightness as well as we’d like when you want to watch contrast-rich content like your typical film in a darkened room, though. So it’s not the best option for serious movie fans.

Its exceptionally low levels of input lag make it a potentially good screen for serious gamers, though, and its MediaGuide Replay feature is a definite selling point.

There are some interesting stand out features on the 42L7453DB – most notably its MediaGuide Replay system, low gaming lag and intensely bright pictures – that could be reasons enough in themselves to pick a 42L7453DB over rival TVs. However, if your main interest is in watching movies, its contrast issues may force you to look elsewhere.

Next, check out our pick of the Best TVs