The 42L7453DB is a 42-inch TV sitting at the top of Toshiba’s HD range for 2014. Such ‘premium’ HD TVs are finding themselves increasingly squeezed as the prices of 4K/UHD TVs plummet, but the 42L7453DB stays well and truly in the safe zone by selling for just £599 – a figure low enough to mix it with the mere mid-range models of most other brands.

The 42L7453DB isn’t the most glamorous high-end HD TV in town. It’s essentially just a plasticky black rectangle atop an attractive but hardly ground-breaking open frame silver desktop stand. It’s fairly slim in the rear, though, and it’ll be easy enough to forgive it a little flimsiness if it delivers great pictures for its £599 price of entry. 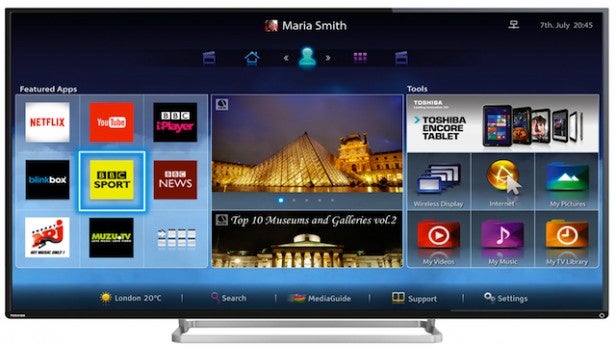 Connections are up to premium TV standards, with highlights of four HDMIs, two USBs and the typical integrated Wi-Fi and LAN network options. The USBs and network connections support playback of a decent array of multimedia file formats, and the network options also give you access to Toshiba’s latest Cloud TV online platform.

There are significant content shortcomings with this platform, but it does have one great feature in the incarnation of it found on the L7453DB range: MediaGuide Replay. By automatically recording to an external hard drive (if you attach one) any programmes the TV’s ‘learning’ algorithms think you might like, MGR essentially brings integrated TiVo-like functionality to the TV world for the first time. Aside from the fact that MGR deserves to be supported by some memory built into the TV (to avoid the likelihood of many people not using it because they never get round to adding any external memory), it’s a really great feature to find in a TV.

For a more in-depth exploration of the pros and cons of Toshiba’s latest Cloud TV smart system, take a look at our dedicated review.

When it comes to the sort of picture technology we look for on premium TVs, things don’t get off to a great start when it turns out that the 42L7453DB uses an IPS-type panel – an LCD technology that was seen as the next big thing due to greater viewing angles but has largely proved disapointing thanks to poor contrast performance. On the upside, the set employs contrast-friendly direct LED lighting (with lights directly behind the screen) and local dimming, where sectors of the lights can be individually controlled.

Its panel also delivers a huge brightness boost over most LCD TVs – up to 700 nits – by reducing the spacing between each of its 1920×1080 pixels. Though obviously we’ll only be embracing this feature if it’s employed without compromising black level response too much.

It’s not just the 42L7453DB’s brightness that’s stretched beyond the norm either. The screen’s colour gamut claims 14% more colour space than you get with the next TV series down in Toshiba’s current LCD range.

And still we’re not done with the premium picture features. For playing ringmaster is Toshiba’s legendary CEVO processing engine, which this year includes a new element apparently designed to reintroduce the brightness and colour lost from originally filmed material when it’s converted into broadcast images. It also drives a potent motion reproduction system that combines backlight scanning, motion interpolation and a native 100Hz panel to deliver a claimed simulated 1500Hz effect.

Turning to the 42L7453DB’s audio, it would be easy to think from its skinny frame that it isn’t doing anything fancy sonically. But in fact, as well as using a ‘Labyrinth’ long-duct speaker design to give the speakers more room to shift air, the set also carries the reasonably effective DTS Premium Sound virtual surround sound processing system and can additionally separate dialogue tracks from the rest of the audio mix. Which, um, is great for karaoke, we guess?!

Last and possibly least on the 42L7453DB’s feature list is its 3D playback. This is of the passive variety, which has enabled Toshiba to include an impressive four pairs of free 3D glasses.

As usual with a Toshiba TV, the 42L7453DB is stuffed full of picture adjustments and calibration tools. These include the sort of stuff required for a pro-level calibration such as white balance, colour and gamma management. The 42L7453DB also provides control over all its key picture processing elements, letting you adjust the strength with which stuff like the motion processing, automatic backlight adjustment and noise reduction is applied. 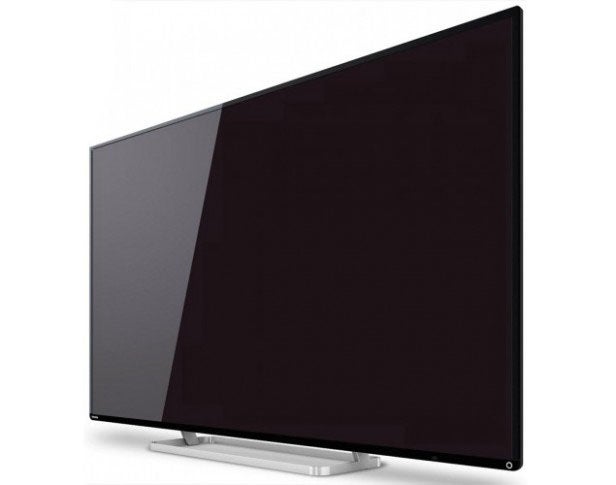 There are a number of recommendations we’d make to anyone trying to optimize a 42L7453DB – mostly to do with trying to get the best out of its rather limited black level response.

First, perverse though it sounds, avoid the trio of ‘Hollywood’ picture settings, since while these aren’t bad where colour tones are concerned, they suffer with very uninspiring black levels – not least because they don’t let you use the TV’s Adaptive Backlight feature.

Using the Standard preset for normal daytime TV viewing you can probably get away with its default settings, which create an extremely bright and colourful picture well suited to bright rooms. Using the Standard mode at night, though, especially if watching a film, you’ll need to ramp the backlight all the way down to its 30 level, and we suggest setting the Adaptive Backlight feature to its Low setting (anything higher can lead to distracting brightness fluctuations).

With HD footage you should turn off noise reduction, as it softens too much detail out of the picture. You could experiment with the Resolution sharpness booster if a sharp picture is your thing, though personally we felt it introduced a bit too much picture noise for comfort.

Finally, after extensive experimentation, we generally decided against using the motion processing tools when watching 2D movies, as they can generate the occasional glitch. However, they’re more useful with 3D, where judder is more of an issue – though there are other issues to consider here, which we’ll discuss in the 3D performance section.