The 42L6453DB proves, sadly, to be just the latest in a line of mostly disappointingly average picture performers from Toshiba.

Watch a dark scene on the 42L6453DB and a number of different problems stand between you and immersion in what you’re trying to watch. For starters, with the adaptive backlight feature deactivated, so that you’re seeing the screen in its native contrast state, dark scenes and even dark parts of predominantly bright scenes look overtly greyed over. As well as not looking natural, the extent of the greyness also serves to obscure some shadow detail in dark areas. 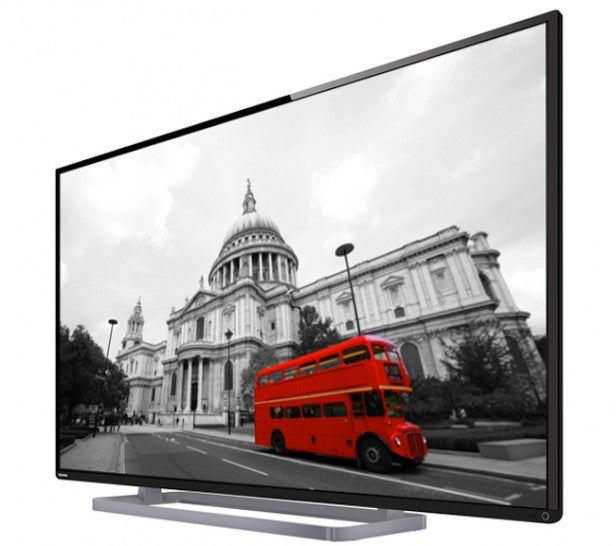 Another significant problem during dark scenes – or if you’re watching a film with a 2.35:1 or 2.4:1 aspect ratio requiring black bars above and below the image – is backlight clouding, where some areas of the picture exhibit unnatural pools of light caused by poorly controlled LED lighting.

The clouding areas are, to be fair, restricted to the edge of the picture rather than hanging over its centre. But they’re unusually vivid by modern standards, and so all too often they draw your eye away from the action you’re supposed to be watching.

You can reduce both the greyness and the impact of the backlight clouds if you engage the adaptive backlight. But even on its low setting this routinely causes overt and sudden shifts in the image’s overall brightness levels that throw you right out of what you’re watching. In fact, for us the adaptive backlight system is borderline unusable, at least for movie viewing.

The most effective ‘fix’ for the 42L6453DB’s clouding and black level shortcomings is to heavily ratchet down the backlight level – something you can get away with as one of the strengths of the 42L6453DB’s panel is its high native brightness. But even once you’ve got the backlight down as low as its sub-40% point black levels still look pretty average. There remain traces of the clouding too, even though pictures have at this point lost quite a lot of the lustre they get with the backlight set higher.

The lack of native contrast doesn’t do colours any favours either. LCD TVs struggle to reproduce natural looking dark colours at the best of times, but the infusion of grey you get with the 42L6453DB makes matters worse.

Colours tend to also look either a bit over-wrought or a bit flat and muted depending on what picture preset you’ve selected. If you’re brave enough to venture into the colour and white balance management tools you can improve colours substantially during bright scenes. But we never felt really happy with the 42L6453DB’s colours during darker moments.

There are some positives to report. HD pictures look quite sharp and detailed (except for where there’s missing shadow detail), and this clarity remains surprisingly intact when there’s motion in the frame. There’s a touch of judder around at times, but it’s not a major distraction.

Pictures are bright and punchy too, as already alluded to, and picture noise is suppressed nicely even without – in fact, especially without – the noise reduction systems in play.

In the end, though, with some fairly uninspiring standard definition upscaling wrapping up the 42L6453DB’s efforts, nothing the set can do at the peripheries of its picture performance can hide the contrast problems at its heart.

Used as the main TV for the review period
Tested for more than a week
Tested using industry calibrated tools, discs and with real world use
Tested with broadcast content (HD/SD), video streams and demo discs
Previous
Toshiba 42L6453DB Review Next
Sound and Conclusions Review