There’s a pleasing mix of minimalism and on-trend glamour to the 42L6453DB’s design. The bezel is fashionably slim, and enjoys an eye-catching gloss-black finish, while the reasonably heavy-duty silver stand looks attractive with its open frame style. 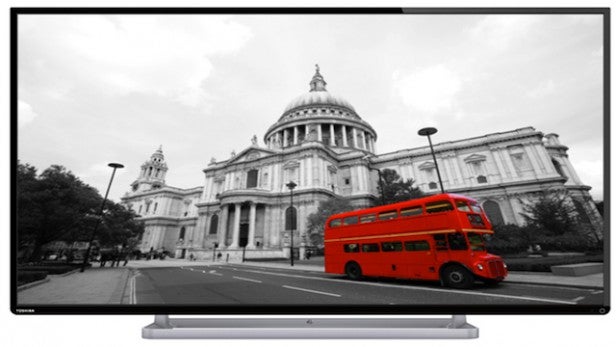 When lifting the 42L6453DB out of its box you can’t fail to notice that it’s rather flimsily built. But it doesn’t look cheap or nasty from a normal viewing distance, and we’ve seen other TVs in recent times deliver plenty of performance thrills despite feeling like they’ve been built out of the cheapest materials possible.

Connections on the 42L6453DB’s rear and down its side are perfectly acceptable for its £429 price point. Its four HDMIs are as many as you could expect from a high-end TV, while its two USBs are enough to cope with both a permanent USB hard drive attachment and swappable USB hard drives for playing back more ‘temporary’ multimedia content.

The set also readily jacks in to your network either via Ethernet cable or built-in Wi-fi. And once you’ve got it on your network you can either stream multimedia to it from other networked devices or head into Toshiba’s online Smart TV platform.

We’ve covered this ‘Cloud TV’ system at length in a dedicated review. So we’ll restrict ourselves here to just mentioning the important stuff, namely that it lacks a few key catch-up and subscription video services, runs slightly sluggishly on the duo-core processing engine employed on the L6453DB series, but enjoys a major attraction in the form of MediaGuide Replay (MGR), which learns the sort of programmes you like to watch and automatically records them.

The only unfortunate thing about MGR is that the TV doesn’t carry any built-in memory, so using the feature is dependent on people going to the trouble – and slight extra expense – of adding an external USB hard drive. Which experience suggests many users probably won’t bother to do.

The set is well stocked with picture calibration features too, including extensive colour, white balance and gamma management tools.

Toshiba has even put some effort into the 42L6453DB’s audio courtesy of a DTS Premium Sound system for getting a surround effect out of mere stereo speakers. 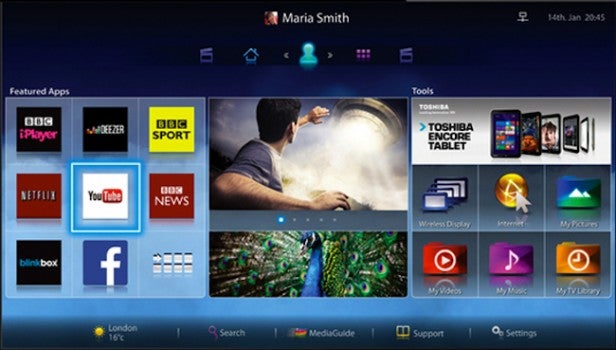 As with a disappointing number of TVs this year, the 42L6453DB struggles with dark scenes. So certainly when watching this TV in a darkened room you should reduce the backlight drastically – to below its 40 setting, in fact.

You may want to experiment with the dynamic contrast feature, as without it black levels are very uninspiring. However, as we’ll discuss in the picture quality section the adaptive backlight system works very clumsily, so even if you decide you want to use it you should definitely stick with its low setting.

Other suggestions we’d make are turning off noise reduction for HD viewing, and keeping the contrast somewhere between 70 and 80, for anything higher can cause pictures to look noisy and slightly ‘bleached’.