Toshiba has really come out fighting with its 2011 TVs. For as well as announcing a potent assault on the high end with its upcoming CEVO-powered TVs, the brand has also decided to go for edge LED lighting even on its most basic LCD models.

So it is that the 42HL833, which is just one step up from the bottom of Toshiba’s new large-screen LCD range, sports edge LED lighting, despite us finding it on sale for less than £600.

The set doesn’t look like an edge LED model, though. Its chunky bezel looks like something we’d expect to find wrapped around an old CCFL light engine, and its rather plasticky finish also seems more fitting of an entry level CCFL set. But then the 42HL833 is a budget set – it just so happens to be one that uses edge LED lighting. And at least the 42HL833 manages to deliver a sense of the slenderness that edge LED lighting was initially created for, as its rear sticks out only 45mm. The 42HL833‘s connections have to rate as disappointing. Especially the discovery of only two HDMIs where we’re now growing accustomed to finding even very cheap TVs managing at least three. Also disappointing – if more predictable – is the set’s lack of an Ethernet port. This immediately alerts us to the fact that the 42HL833 can’t access Toshiba’s new Places online service, or files stored on a DLNA PC. Worse, it also reveals that – as with Samsung’s 32D5000 – the set doesn’t have a Freeview HD tuner built in.

We’d kind of hoped that Freeview HD tuners would have become standard on even cheap TVs this year, especially those with screens as large as the 42HL833‘s 42in one. But we were obviously being optimistic. That doesn’t make us feel the lack of an HD tuner on the 42HL833 any less keenly, though.

We headed into the 42HL833’s menus with little expectation of finding anything very interesting. But it turns out that it does have a couple of tricks up its sleeve. Particularly unexpected is its colour management toolset, which lets you tweak the brightness, saturation and hue of the RGB and CMY colours.

We have our doubts if many people likely to be interested in a relatively unambitious TV like the 42HL833 will really care about such a colour management system. Certainly we suspect many people would have preferred a Freeview HD tuner if they’d been given the choice. But hey – the colour management system is there, it’s nicely presented, and it can actually improve the 42HL833’s picture quality. So it’s really not something we should moan about.

There’s also a gamma adjustment, and separate standard and MPEG noise reduction circuits. But really the only remaining important feature is the 42HL833’s multimedia ‘portal’, through which it can play a wide array of different file types directly off USB storage devices. Formats supported include XviD, H.264 and MKV-packaged video formats.

Also worth mentioning before we get to the 42HL833’s picture quality is how easy the set is to use. Its onscreen menus are clean and include a few graphics (a novelty for Toshiba!), and although its remote control is plasticky and ugly, it’s surprisingly intuitive and responsive.

The only annoying thing from an ease of use perspective is the set’s horribly clunky mechanism for shifting between HD and standard def sources. The screen goes blue for as much as three or four seconds, and the set emits a most undignified noise. As well as making the set feel like a throwback to the very first days of HD, the ugliness of the resolution-switching process actually makes us feel a little concerned about the 42HL833’s long-term reliability. Though we must stress that this is just a concern; we don’t have any hard proof of any potential problems. 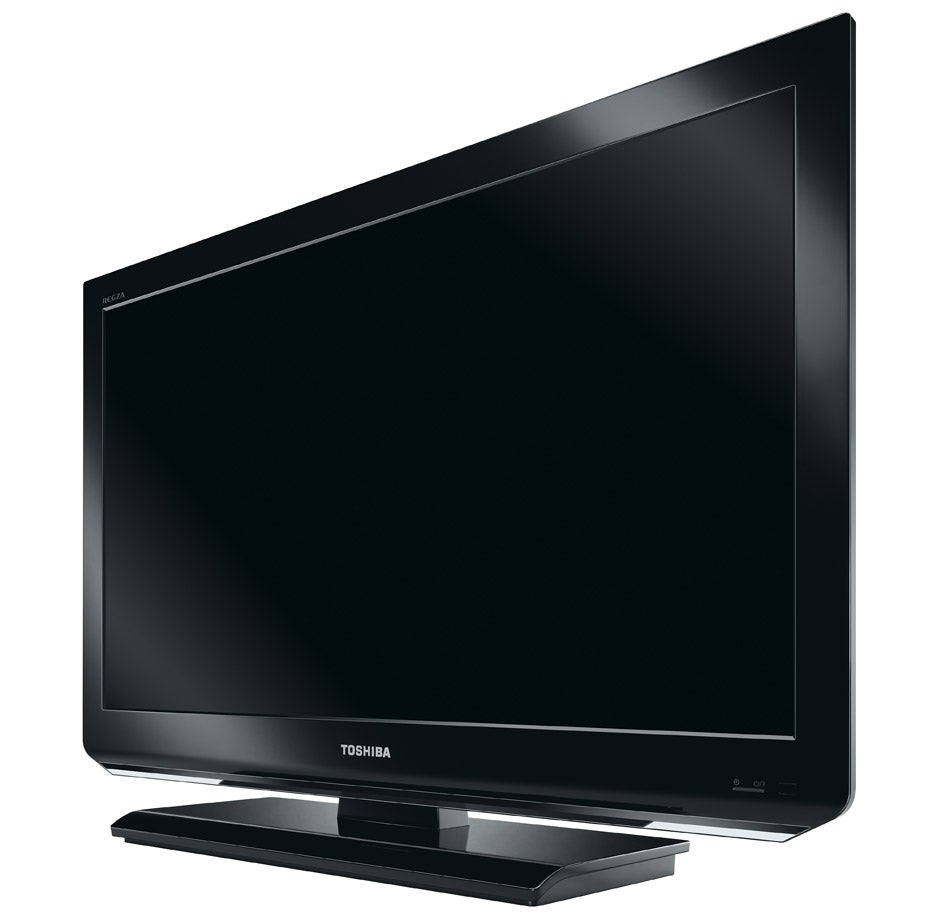 The big question as we get down to scrutinising the 42HL833’s pictures is whether Toshiba’s move to edge LED lighting for its entry level models has paid off. And rather pathetically the only answer we can come up with is: maybe.

There are some definite upsides, mostly focussed around the image’s dynamism and punch. Brightness levels, for a start, are clearly higher than those of Toshiba’s equivalent CCFL models from last year, which immediately makes you feel more connected with them.

Not surprisingly the extra light output also helps colours look more vibrant and punchy than they do on Toshiba’s previous CCFL models. What’s most pleasing about the 42HL833’s colours, though, is how believable they look. Bright scenes easily avoid the tendency to slide into the PC-biassed colour temperatures sometimes exhibited by entry level sets.

The extra punch to the edge-lit images has another positive knock-on effect too, in that it helps the full HD screen bring out all the detailing in good HD images more effectively. So it’s great to also discover that the clarity isn’t severely upset by resolution loss over moving objects, despite the 42HL833 only having bog-standard 50Hz playback. Clearly the native response time of the panel must be pretty decent.

With most of our comments so far being positive, you’re probably wondering why we were so non-committal about Toshiba’s shift to edge LED lighting for its budget models. The answer – as regular readers might be able to guess – is that the 42HL833’s contrast range isn’t the best.

First of all, the screen falls foul of that still aggravatingly common problem of backlight inconsistency. During very dark scenes there’s around a cm or so of extra brightness along every edge of the screen, but in places this brighter ‘line’ stretches out much further. The sense of patchiness grows, too, if you have to watch the TV from much of an angle. And as you can imagine, whenever the backlight inconsistencies are apparent, they’re invariably distracting. 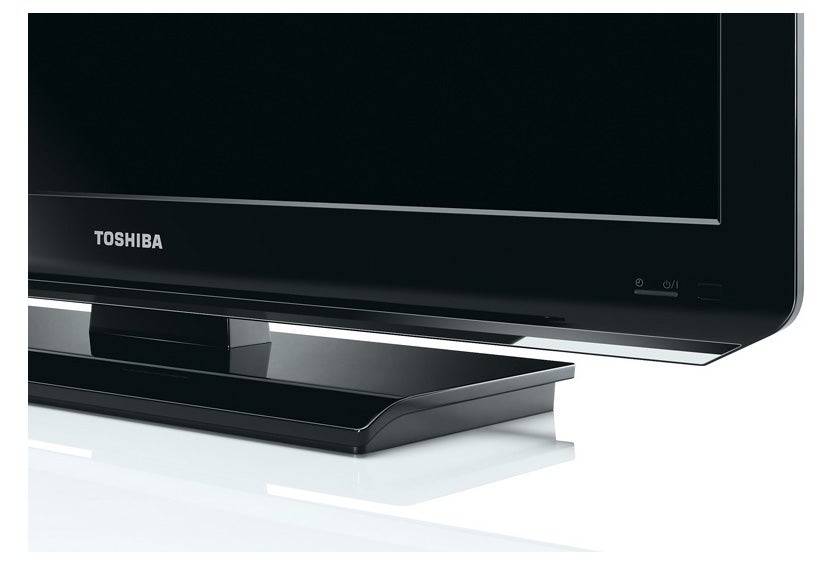 Just as well, then, that you can’t see the inconsistencies when watching anything except really dark scenes. You can also reduce their impact by making sure you don’t leave the TV’s backlight set too high – but we weren’t able to remove their influence entirely.

The other problem raised by the edge LED backlight is that the 42HL833’s basic black level response isn’t especially profound. Dark scenes thus tend to look a little grey, resulting in some shadow detailing getting lost in the ‘cloud’.

The 42HL833’s sound performance is a mixed bag. In the plus column, it’s able to deliver more raw volume than many budget, slimline TVs, and it handles relatively tame ‘daytime TV’ fare well enough. The problems emerge, as expected, when the set’s asked to handle a big action scene, at which point the soundstage starts to appear rather harsh and incoherent, with brittle trebles and compressed bass.

Verdict
Toshiba’s entry-level 42in full HD TV is a likeable enough effort, but doesn’t do anything truly special. It’s at its strongest as a basic TV, showing typical TV broadcasts, or when showing bright Blu-rays like an animated movie. Its talent for reproducing HD detail makes its lack of a Freeview HD tuner seem unfortunate, though, and while its edge LED lighting certainly delivers a more punchy picture than you got from last year’s equivalent Toshiba CCFL models, it’s also arguably made the 42HL833’s black level performance feel slightly worse.

It’s also impossible to ignore the fact that Sony’s CCFL-lit 40CX523 delivers an arguably more consistent all-round performance as well as DLNA networking, a Freeview HD tuner and impressive online capabilities for around the same money as the 42HL833…