Getting back to areas where the 40TL968B’s feature count goes beyond the budget call of duty, its pictures aren’t the basic 50Hz affairs we might have expected. Instead it enjoys Toshiba’s AMR 200 system, which combines a native 100Hz panel with backlight blinking to produce a 200Hz-like effect. This should lead to crisper, less blurry motion reproduction. 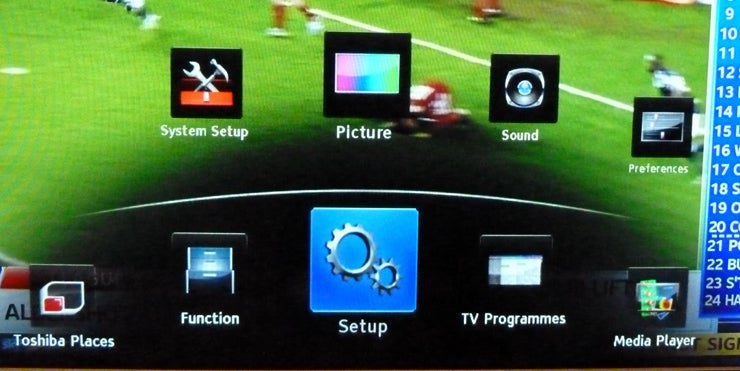 Heading into the 40TL968’s onscreen menus reveals more unexpected goodies. For a start, you’re greeted by one of the TV world’s more intuitive onscreen menu systems: a cunning combination of two concentric circles that are easy to navigate and allow you to see the menu/sub-menu structure ‘progression’ in a much more helpful way than most menu systems do.

Within the picture menus you get both a long list of themed picture presets, backlight as well as contrast and brightness adjustments, and not one but two ‘serious’ submenus dubbed Advanced Picture Settings and Expert Picture Settings.

The Advanced one leads you into a colour management system via which you can adjust the hue, saturation and brightness of the RGBCMY colour elements, as well as the colour temperature. Plus you can turn on or off the set’s auto brightness and auto backlight modes, adjust the picture’s black/white balance, call in Toshiba’s Resolution processing for boosting the apparent sharpness of both HD and standard def sources, turn on or off a noise reduction processing system, and adjust the level of something called Clear Image.

This turns out to be an iteration on previous motion improvement systems, claiming to – and we quote – ‘reduce picture blur without decreasing image brightness or adding flicker’. We’ll have a good look at this later, obviously.

The Expert menu, meanwhile, provides you with a test pattern you can call up to help you with your calibrations, as well as more fine-tuning adjustments for the white balance and gamma levels, and even the option to have the screen only show the red, blue or green colour elements in a picture to aid your colour tinkering.

We got quite a bit of mileage out of these tools too, since we weren’t particularly happy with any of the 40TL968B’s provided picture presets. They tend to make colours look too aggressive or too green, or brightness levels too muted.

First impressions of the 40TL968B’s tweaked pictures are very positive. HD broadcasts from either the built-in Freeview tuner or an attached Sky HD box both look remarkably good for the 40TL968B’s money. Detail and sharpness levels are both high, colours are bold and dynamic, and contrast looks high at this point (where we’re looking at predominantly bright images).

Motion seems quite nicely handled too. There is a bit of blurring during camera pans or over fast-moving objects, but it’s seldom bad enough to be truly distracting, and is at any rate leagues less obvious than it tends to be on other TVs in the 40TL968B’s price bracket. 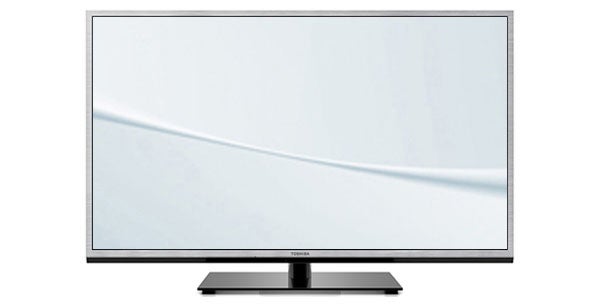 We’d recommend experimenting with the Clear Image mode if you do notice motion blur, as the feature can certainly reduce it. Though you might only want to use it on its Standard or Medium setting rather than high, to minimise unwanted processing side effects. You may also not want to use it when watching 24p Blu-rays if you’re offended by the sight of films starting to look more like video.

More good news concerns the 40TL968B’s standard definition pictures. Even in their ‘native’ mode they’re cleaner and crisper than usual with such a cheap TV, but the Resolution system additionally does a great job of adding detail and a greater sense of depth to standard def images without exaggerating noise.

Used as the main TV for the review period
Tested for more than a week
Tested using industry calibrated tools, discs and with real world use
Tested with broadcast content (HD/SD), video streams and demo discs
Previous
Toshiba 40TL968B Review Next
3D and Conclusions Review