Dimming the lights and firing up a few of our favourite test dark scenes from Blu-ray, though, quickly uncovers a big problem. For it’s clear right away that the 40TL968B struggles quite badly with backlight clouding flaws.

Any predominantly dark shots show up numerous ‘clouds’ of extra brightness – and not just at the screen’s corners, either. At times it looks as though around 50% of the screen area is covered with ‘blotches’ of light inconsistency, leaving you feeling like you’re watching the action through a lens that someone’s put grubby fingermarks on. Very distracting.

You’re miles less aware of the inconsistencies, to be fair, if you’re watching the TV in a bright room. And you can reduce the intensity of the clouds’ appearance by taking the backlight way down – to around 40%, say. But this latter course of action inevitably causes the picture to look rather dull, and crushes out more shadow detail from dark picture areas than we felt comfortable with.

Cranking the backlight down also oddly seems to upset the image’s colour balance, requiring a recalibration to balance the saturations out.

3D
Shifting into another dimension with 3D discs of Tangled and The Amazing Spiderman, the 40TL968B mostly gets back on track. Its 3D pictures look impressively crisp for a cheap active 3D set, especially if you activate the Resolution system. This crispness holds up quite well even when the set has to handle motion in and across the 3D frame too, despite the fact that the Clear Image system isn’t available in 3D mode.

It’s also a relief to find the 40TL968B not suffering badly at all with active 3D’s crosstalk problem. It’s not completely immune to it; there are tell-tale traces of ghosting around distant objects, especially if they contrast strongly against their backgrounds. But such moments don’t show up as often as might have been expected, and even when they do they’re fairly subtle in their appearance.

Depth levels are good too, and pictures are also impressively bright and colour-rich by active 3D standards.

The only real problem with 3D, in fact, continues to be the backlight uniformity. For while you don’t see any issues during bright scenes, during dark ones the need for the panel to run brighter to counter the dimming effect of the active shutter glasses means that dark scenes are rife with uneven lighting clouds. And since this is a 2D phenomenon lying across the surface of a 3D image, it looks even more distracting than it does in 2D mode.

Turning next to input lag (important for serious gamers), during our tests we found the TV varying – oddly – between an entirely acceptable 33ms and a less pleasing 68ms. This higher figure, though not ever-present, is enough on paper to potentially reduce your gaming performance with timing-sensitive games. 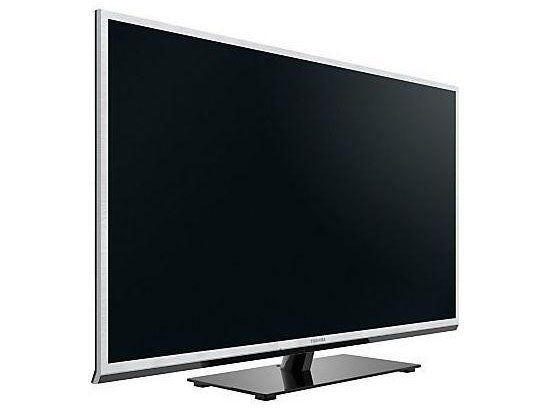 Sonically the 40TL968B is about average for a slim, affordable TV. It sounds OK with relatively undemanding fare, but pipe in an action scene – especially if it’s accompanied by a score – and it quickly starts to sound a bit thin and harsh, thanks to a lack of any significant bass or treble extension.

For much of the time, the 40TL968B looks like one of the biggest TV bargains ever. With bright, colourful footage it really is stupidly good for its money, in 2D or 3D mode.

However, the wheels come off when the TV has to show a dark scene, thanks to the appearance of some aggressive backlight unevenness.

On balance we could readily imagine the 40TL968B doing the business for a relatively casual user who’s putting it into a bright room. But it will frustrate the heck out of anyone who likes a bit of ‘serious’, lights-down film viewing from time to time.