These are increasingly uncomfortable times for the traditional budget TV market. Brands like Goodmans, Bush, Technika and even Finlux have long depended on their ability to churn out no-frills TVs substantially cheaper than the bigger, more established brands can. But sustaining that key pricing gap is getting increasingly tough thanks to the way some big brands are slashing their TV prices this year. 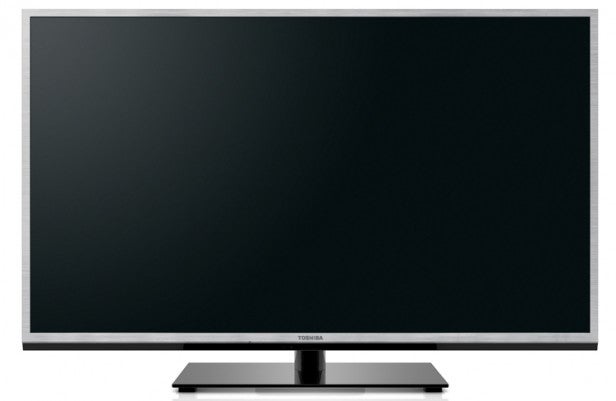 All that glitters is not here
In finding out if the Toshiba 40TL963B is really the astounding bargain it appears to be on paper, the first thing we did was get up close and personal with that apparently very chic design. And it has to be said that when you get within touching distance, the frame does reveal itself to be markedly more plasticky than the glinting metallic or ‘crystal’ finish you tend to get with other, more upscale slim TV models.

From a sensible distance, though, it looks just fine. Plus, of course, its slender bezel allows it to fit into a much smaller space than your typical 40in TV.

Connections
There are other signs of slight budget compromise when it comes to the 40TL963’s connections. For starters, most of them stick straight out of the TV’s rear rather than being accessed from the side, making the TV potentially problematic as a wall-hanging option. The set also doesn’t sport built-in Wi-Fi like most ‘smart’ TVs this year. If you want to connect the set to a DLNA PC or your router wirelessly, you’ll have to cough up £30 to £40 for one of Toshiba’s Wi-Fi USB dongles. Just as well, then, that the set provides two USB ports.

Toshiba might very reasonably argue at this point, though, that being able to get any sort of online functionality and multimedia playback on a 3D-capable 40in TV costing just £540 should be considered a bonus in itself. 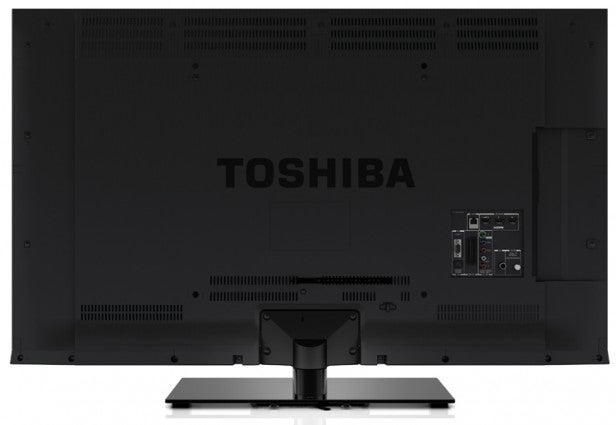 Toshiba’s online offering is called Places, thanks to the way it straightforwardly divides all of its available content into different sections. So you get a Social Place, a Video Place, a Music Place and so on. While Toshiba’s menu design and organisation are excellent, though, they can’t hide a rather fundamental problem with Places as it stands today: the service just doesn’t have enough content.

You do get the BBC iPlayer, YouTube and AceTrax, plus a few vaguely useful subscription channels such as The Cartoon Network and HiT Entertainment. But there’s no LoveFilm, no Netflix, and just not as much free video as we like to see from modern online TVs.

The Toshiba 40TL963’s screen specifications are better than you have any right to expect for its money. It’s a full HD screen, driven by Toshiba’s AMR200 system, which combines a 100Hz native refresh rate with a blinking backlight to produce a motion-boosting 200Hz effect. This sort of image processing is practically unheard of at the 40TL963’s price level.

Also impressive on paper is the 40TL963’s 1,000,000:1 claimed contrast ratio, achieved with the help of a dynamic contrast system for the set’s edge LED lighting array.

Setup options
Heading into the Toshiba 40TL963’s onscreen menus continues the ‘more than you could reasonably expect’ theme. Particularly striking is the presence of a decent colour management system, as well as a backlight adjustment alongside the usual brightness and contrast tools, and separate, multi-level adjustments for the set’s two (MPEG and standard) noise reduction systems. 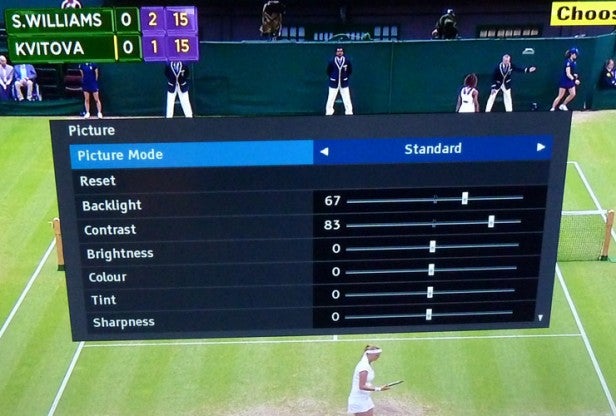 Firing the 40TL963 into action with some HD broadcast fare fed in through its Freeview HD tuner gets the testing phase of this review off to a very appealing start. Detail levels are very respectable, for instance. Not world-beating, but certainly you can clearly make out such tell-tale HD signs as the crosshatch pattern in the nets at Wimbledon, or the weaves of the player’s shirts during close-up shots.

It’s noticeable, too, that Toshiba’s motion processing works quite nicely, reducing the panel’s innate tendency to introduce a little resolution loss over moving objects. You should only use this motion processing on its Standard level if you don’t want the image to look a little unnatural and ‘glitchy’, but otherwise it’s a surprisingly assured system for the set’s price.

Colours
Colours, meanwhile, are punchy and well-saturated, and the image is brighter than the set’s claimed 400cd/m2 measurement would have lead us to expect. Blends suffer a touch of banding from time to time, but this isn’t a major issue for the money.

The only problem at this stage, really, is that colours look just a touch ‘bleached’ using the TV’s default modes, leaving skin tones looking a bit unnatural and some very rich colourscapes looking slightly washed out. Thankfully Toshiba has provided you with enough tools to improve this default situation, but it would have been nice if the presets had been more helpfully devised.

Particularly disappointing among the presets were the two ‘Hollywood’ options, which produced pictures too soft and washed out for comfort. It’s hard to imagine even the most ardent of movie enthusiasts persuading themselves that the Hollywood modes – especially Hollywood 1 – are genuinely more enjoyable to watch than a tweaked version of the set’s Standard mode.

Blu-rays look good
Shifting our focus to more contrast-rich HD fare from a few Blu-rays, the Toshiba 40TL963 in some ways underlines how good it is for its money. For black parts of the picture actually look – shock, horror – black. Or at least reasonably close to it. Set the backlight sensibly low – around its 50-60% level – and the set keeps an impressive lid on the sort of grey mist effect that can plague many LCD TVs (especially budget ones).

It’s good, too, to find that the Toshiba 40TL963’s respectable black level response doesn’t require the screen to crush out too much shadow detail from dark scenes, despite also being able to deliver a reasonable level of punch to bright parts of predominantly dark shots.

The 40TL963 does, though, fall prey to a rather common Toshiba TV problem: backlight inconsistency. During very dark scenes our test sample displayed some clear patches of differing brightness in places, especially on the right hand side. We managed to reduce the impact of these inconsistencies by taking the backlight right down to around 30 per cent, but there were still occasions during very dark material where the cloudy grey patches could prove distracting.

Please note, though, that the inconsistencies aren’t visible at all during routine bright footage, even with the backlight cranked high. 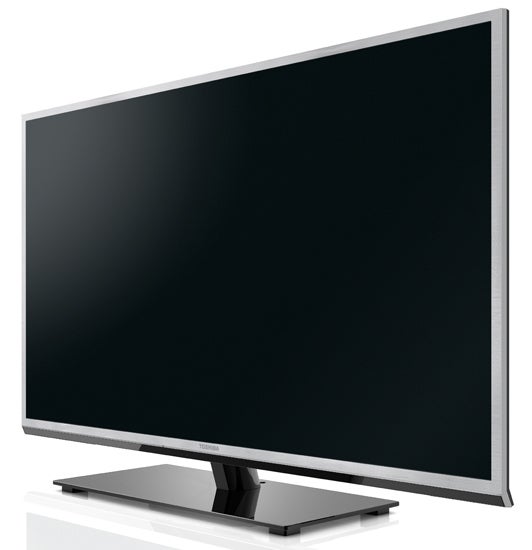 Another area where the Toshiba 40TL963’s affordability sneaks into its performance is its standard definition pictures. The upscaling process doesn’t sharpen pictures up quite as much as we’d like, and nor does it take out as much source noise as we’d like. The results are nonetheless very watchable, mind you, and again can be considered better than the norm for the sub-£600 40in price level.

The 3D bit
Turning to 3D, the first thing to do is moan about there not being any 3D glasses included for free with the TV. But then we guess Toshiba wouldn’t be able to sell the TV so cheaply if 3D glasses were included.

If you do invest in 3D glasses, you’re rewarded with a solid 3D effort. Detail levels are quite high, the image’s contrast is strong, the dimming effect of the active shutter glasses hides the backlight consistency problems, and the sense of depth is good. The 3D pictures could be brighter, and there’s more crosstalk around than we’d like to see. But overall it’s a very good effort indeed considering we’re talking about full HD active 3D images on a 40in TV costing just £540. 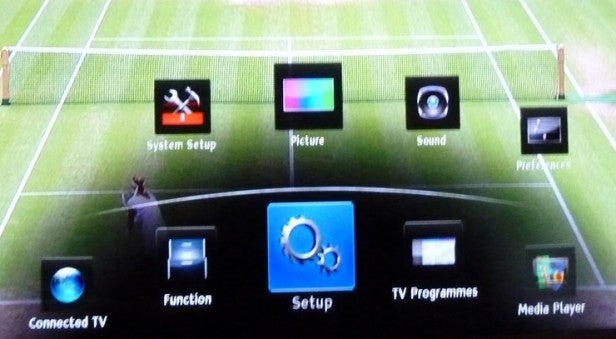 Gamers interested in the Toshiba 40TL963 will be reasonably happy to note that we measured a typical input lag figure for the TV of around 39ms using the Game preset. However, strangely we picked up a few measurements where the lag slipped as high as 70ms for no good reason we could fathom.

Wrapping up proceedings with the 40TL963’s audio performance, it’s slightly better than expected for a slim TV. The soundstage is quite large, and the dynamic range is reasonably extensive, with even a hint of bass when required. Loud action scenes can sound a bit harsh, but then this is true also of the vast majority of other skinny-framed TVs in town.

Verdict
If you’re looking for a mid-range TV with designer looks at a bargain bucket price, it’s difficult to see how you could do better than the Toshiba 40TL963. That said, we still can’t bring ourselves to give it an unbridled recommendation on account of its backlight inconsistencies – though these shouldn’t trouble you often unless you happen to be a fairly serious cinephile.