While we’ve found plenty of positive things to say about Toshiba’s 2012 TVs, there has been one issue that’s consistently cheesed us off: their lack of any built-in Wi-Fi. Even models equipped with Toshiba’s ‘Places’ online system have tended to treat Wi-Fi as an optional extra rather than a fundamental requirement.

The problem with this is that both research and good old common sense shows that if people can’t easily attach their TVs to their broadband routers, they’re far less likely to use any online features their new TVs might have. And since most people we know don’t have their broadband routers sat near their TVs, not enabling a new TV to talk to a router wirelessly really isn’t making networking that TV easy.

Toshiba’s decision not to put Wi-Fi into the vast majority of its TVs has been made to look all the more stingy by the fact that all the other mainstream brands have now got Wi-Fi in almost all of their ‘Smart’ TVs, and by the way Toshiba itself has managed to build Wi-Fi into its own sub-£100 Blu-ray players.

To be fair to Toshiba, though, it’s apparently keen to address its Wi-Fi faux pas. For it’s just started to roll out a new range of ‘mid-term’ TVs that fix the Wi-Fi issue – a new range that kicks off with the 40RL958B. 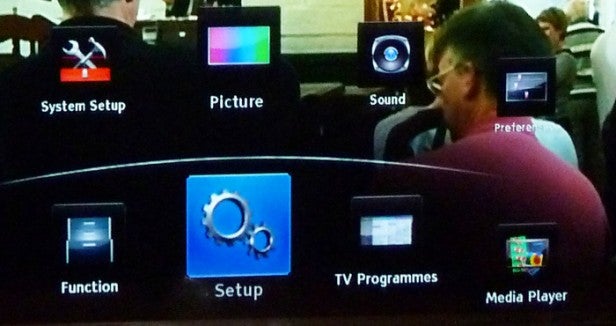 Apparently the 40RL958B is going to be introduced alongside Toshiba’s 40RL953B rather than replacing it, and will attract a £50 or so premium over its non-Wi-Fi sibling. It also brings in a couple of new online features for Toshiba: Skype support (handy) and an open Web browser (much less handy given that it’s far easier and more convenient to surf on a laptop, tablet PC or smartphone).

The new online features are joined on Toshiba’s so-called ‘Places’ platform by other highlights of BlinkBox, Acetrax, Viewster, the BBC iPlayer. DailyMotion, YouTube, the latest version of Woomi, LiveSport.tv, iConcerts, Aupeo Personal Radio, Facebook, and Twitter. It’s good to see Places growing slowly, but at the same time it’s still glaringly short of content versus the online services now available via most of the other big-name TV brands. The continuing lack of any Netflix and/or LoveFilm apps is particularly frustrating.

When it comes to the Places interface, in principal we still like its colourful, well-organised menus – though it is also true that the way it divides content up into different sections rather highlights the current lack of content. The menu design should come into its own more as content levels continue to increase, though. 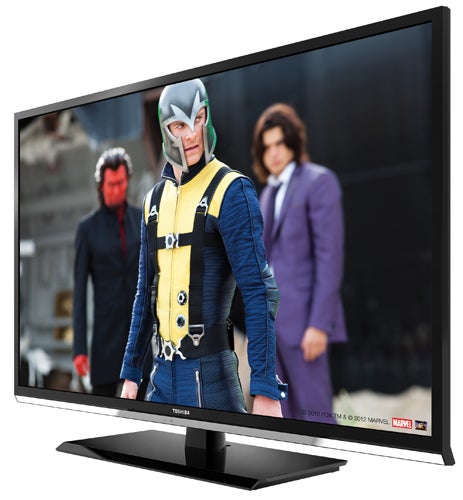 Our only major beef with the Places operating system is the infuriating way weirdly loud video adverts (one or two not even in English!) for some of the services on offer keep cycling through a box in the bottom right. This box could have been put to far better use as a small screen continuing to show the TV programme you were watching when you hit the remote’s Places button.

Talking of the remote, it’s not a very happy affair. Some of the buttons – including the Places one – are very small and unhelpfully labelled, and it seemed to only communicate with the TV over a narrower vertical angle than we’d have liked.

Setting the 40RL958B up uncovers an adequate set of connections and picture adjustments. Three HDMIs kick things off, accompanied by other highlights of the aforementioned key Wi-Fi support, an Ethernet port if hardwiring to your router isn’t a problem, and a USB port for playing back multimedia files or recording from the built-in Freeview HD tuner. 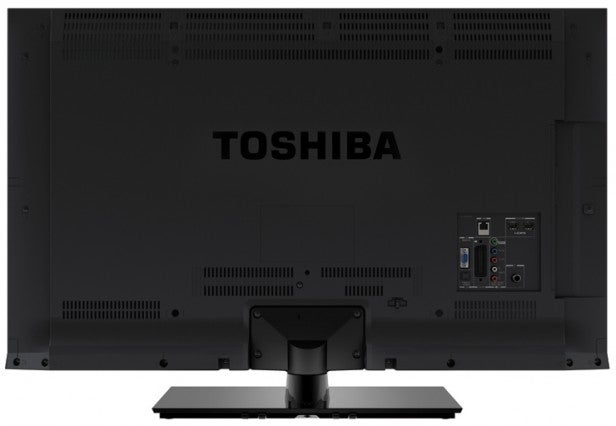 The Wi-Fi/LAN options allow you to network the TV with a DLNA-capable PC as well as the Places online service – though we have to say that the 40RL958B’s DLNA capabilities are a little primitive by today’s standards. The new Wi-Fi system is also compatible with the Intel WiDi PC screen sharing system.

Please note that many of the 40RL958B’s connections face straight out of the set’s rear, making it a potentially difficult option to hang on a wall.

Within the 40RL958B’s attractively presented ‘concentric circles’ main onscreen menus, meanwhile, highlight features include a reasonably helpful set of picture presets, a backlight adjustment, different power settings for the set’s auto backlight adjustment, noise reduction routines, a colour management system that lets you adjust the hue, saturation and brightness of each of the six main colour elements, and an on/off toggle for Toshiba’s ResolutionPlus system.

There’s even an ‘Expert’ sub-menu that provides a filtering system for the red, green and blue colour elements, and both 2p and 10p white balance systems, with RGB offset and gain adjustments.

ResolutionPlus, as its name suggests, applies processing to boost the sharpness and apparent detail of pictures. It’s startlingly effective as such systems go in our opinion, especially with standard definition, which it makes look much crisper without, crucially, leaving source noise looking too exposed. In this latter respect in particular it’s a clear advance over the upscaling engines you get with most TVs in the 40RL958B’s price bracket.

ResolutionPlus can even apply a smaller level of extra sharpness to HD sources, though we’re not sure that it’s really necessary here, and can leave HD images looking a touch too gritty for comfort.

For a 40in TV costing just £430, the 40RL958B’s pictures are mostly exceptional. For starters they’re both brighter and more vibrantly coloured than you would usually expect to find for so little money ensuring that they pop off the screen in an enjoyably eye-catching way.

Colours aren’t gaudy or vulgar in their vibrancy either. On the contrary, the combination of natural tones with a wide enough palette to deliver blends and skin tones without the picture degrading into striping or patchiness goes well beyond the rather simplistic, cartoonish approach to colour that’s so common at the budget end of the market.

The overall temperature of the picture’s colours is well calibrated for
video as opposed to PC use too, and colours don’t take anywhere near as
severe a dive in tonal accuracy when shifting down from HD to standard
def as they do on many budget sets.

Sharpness levels, meanwhile, are impressive. The 40RL958B makes full use of the 1920×1080 pixels contained in its screen to deliver a crisp, textured HD image that doesn’t even break down into softness when there’s a lot of motion to handle (so long as you deactivate the noise reduction options when watching HD, anyway). In this latter respect in particular the 40RL958B is again far removed from the soft mush commonly witnessed when similarly affordable TVs try to handle a Hollywood action scene.

The most mixed part of the 40RL958B’s picture performance comes – predictably enough – with its handling of very dark scenes. Cheap edge LED LCD TVs find it notoriously difficult to control their light output so that dark scenes enjoy a genuinely black colour, and so that the whole screen area is uniformly lit, without dark scenes suffering areas of clouding. The 40RL958B is definitely not immune to either of these concerns, as very dark material exhibits a slight grey overtone, as well as some gentle evidence of clouding, especially in an area to the screen’s far right.

There’s also less shadow detail to see in dark corners than you get with the best LCD TVs, especially after you’ve reduced the backlight to around its -10 to -15 level in a bid to minimise the greyness and backlight clouding issues.

But you could likely have worked this out for yourself. The really important question for the 40RL958B is whether its pictures are good by the standards of its price level. And the simple answer to that is yes, they certainly are.

The 40RL958B’s affordability and size make it a potentially firm favourite among gamers. So it’s pleasing to find that it suffers with less than 35ms of input lag – a low enough figure to leave your gaming abilities pretty much unaffected. 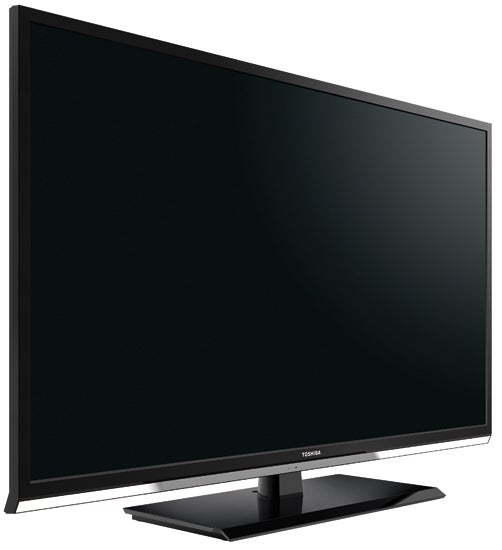 The 40RL958B also looks cuter than the majority of its similarly cheap rivals thanks to its reasonably slender bezel, gloss black finish and reasonably robust bodywork.

The weakest thing about the 40RL958B’s performance is its audio. It’s thin and unconvincing with any sound mix that’s at all complex or multilayered, over-exaggerating trebles and thus leaving action scenes sounding painfully harsh and voices often sounding a little ‘electronic’ and contained.

Despite its rather feeble audio and minor issues showing dark scenes, the 40RL958B is still a very attractive budget option, thanks to its surprisingly lengthy feature list and a picture quality with both HD and standard def sources that’s comfortably ahead of most similarly priced rivals.