Toshiba scored a big success last Christmas with the launch of its TL series, as their slinkily-bezelled designs and extremely aggressive price tags struck a chord with consumers. So it’s no great surprise to see Toshiba picking up on the TL’s successful formula with the first of its genuine new 2012 models, the Toshiba 40RL953.

This 40in edge LED screen costs under £480, and again features a very slender bezel – barely 2cm wide along the top, left and right edges, and only a touch bigger along the bottom. The bezel is predominantly black versus the silvery grey of the TL series, but it still looks nice, and is offset to pleasant effect along the bottom by a shiny though slightly cheap-looking metal(ish) strip. 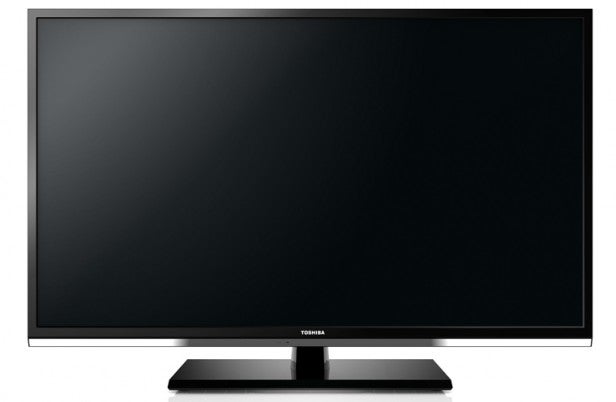 Connections are solid considering how cheap the Toshiba 40RL953 is. There are only three HDMIs when our HD-obsessive side would ideally have found four. But on the upside there’s a USB port capable of playing back video, photo and music files, as well as a LAN you can use to hook the TV up to a DLNA-capable PC or a router so it can access Toshiba’s Places online service.

Wherefore art thou Wi-Fi
The Toshiba 40RL953 unfortunately – albeit understandably for its money – does not have built-in Wi-Fi. If you want Wi-Fi, you’ll have to pay extra for a USB dongle. While this situation might be justifiable by the 40RL953 on pricing grounds, research suggests that TVs without Wi-Fi access out of the box are far less likely to have their owners explore their online capabilities.

Delving into the 40RL953’s menus brings us face to finger with one of the most gargantuan remote controls we’ve seen. In principle we don’t have a problem with a remote being big, so long as it’s well balanced and uses its space sensibly to emphasise the most commonly used buttons. But the monstrosity shipped with the 40RL953 does neither of these things, feeling both top heavy and absurdly crowded. It even manages to feature a few buttons at its lower end that have to rank as the smallest we’ve ever seen. Bonkers.

The onscreen menus are much more elegant than the remote that accesses them, using a stylish, graphically rich and genuinely effective twin radial system to streamline your navigation. The only complaint you could raise about them is that their text is a touch small. 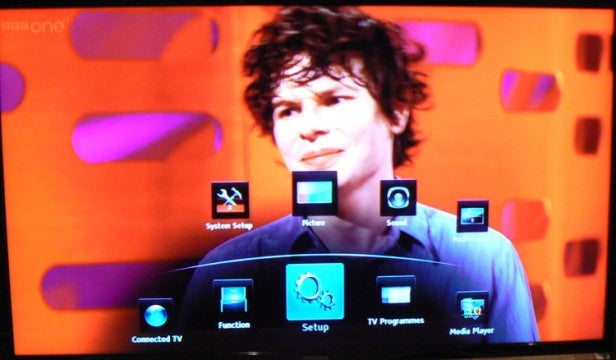 The set carries a useful-sounding set of picture presets – including Game and two ‘Hollywood’ movie modes – while tucked away in an Advanced Picture Settings submenu are such non-budget aids as a colour management system, off/low/high options for the set’s active backlight control, separate MPEG NR and DNR adjustments, and a very simplistic black/white level adjustment that lets you pick low, middle or high options.

Heading next into the Toshiba Places online “zone” (after wishing the remote had a dedicated button for accessing it), first impressions are strong thanks to the service’s really pretty interface.

The Toshiba 40RL953’s interface uses bold, colourful icons and separates the online content into simple to understand “places” – the Video Place, Music Place, Social Place, News Place, and Game Place. You can also put your preferred apps into a Favourite Services Place, and dotted around the screen’s edges are one-click shortcuts to popular or promoted services.

Entering a “Place” reveals a simple row of large tiles linking to different services. In the Video Place, for instance, you can find Acetrax, Viewster, the BBC iPlayer, YouTube, Daily Motion, Box Office 365, Woomi, Cartoon Network, and HiT Entertainment – the majority of which, of course, involve some sort of extra expenditure on your part. 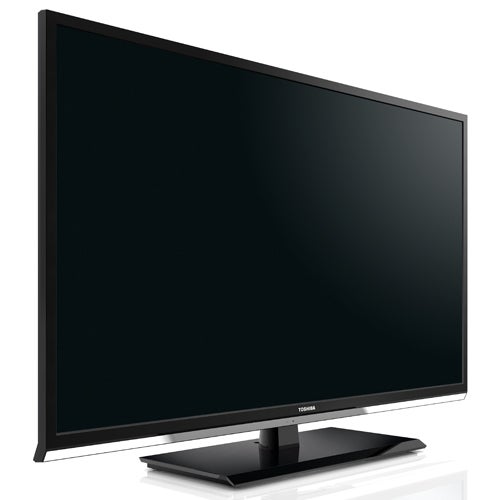 Clicking the BBC iPlayer and YouTube apps in Places thankfully allows you to go straight into them. You don’t have to first quit out of Places like you had to with 2011’s Toshiba Places TVs.

The only problem with the Places approach – aside from the fact that the menus react rather sluggishly to your remote commands on the 40RL953 –  is that right now its structure simply emphasises how little content Toshiba has in some of its categories. The Music place, for instance, just contains Aupeo and iConcerts apps; the News place just contains meteonews.tv, France 24, Euronews, and Livesport.TV; and The Game Place just has a single Funspot app.

Social whirlwind
The Social Place does at least feature Twitter, Facebook, Flickr and Daily Motion this year, as well as your own email and bookmark tools. But still, overall, it’s clear we’re not talking about content levels that remotely rival the big hitters of the online TV world.

It’s worth adding too that the Toshiba 40RL953 doesn’t contain a built-in camera, and so can’t deliver on the facial recognition system seen on some previous Toshiba sets, which allowed TVs to automatically adjust their settings based on who they could ‘see’ was using them. 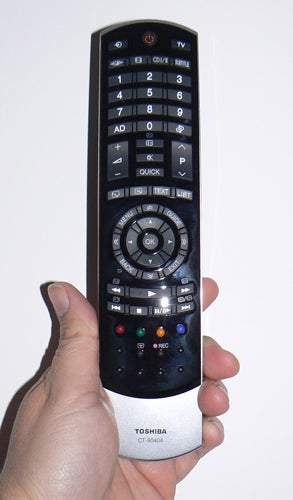 We’re now accustomed to finding Toshiba TVs confidently and comfortably outperforming their budget price points (barring the occasional backlight consistency disaster). But first impressions of the 40RL853 are surprisingly underwhelming, on account of the set’s rather rough and ready looking tuner pictures.

This is all very strange from a brand that’s previously earned praise for developing some of the best upscaling engines the affordable AV world has had to offer. But there really aren’t any tools on offer among the 40RL953‘s set up systems that make any inroads into resolving the softness problem.

Even HD feeds from the Toshiba 40RL953’s built-in Freeview HD tuner don’t look any thing special where detail and general sharpness are concerned. The main culprit again appears to be a lack of colour subtlety, which can still leave HD skin tones and backgrounds looking too ‘monotone’ for comfort. It’s also pretty apparent, though, when there’s any sort of significant motion going on, that the 40RL953 suffers from a little motion blur (or, more accurately, resolution loss).

A bit of perspective
To be fair to Toshiba, the 40RL953 arrived on our test benches right after the imperious Sony KDL-46HX853, with its near-perfect motion handling. So the Toshiba’s problems in this respect probably stood out more than they might have done otherwise. In the closer context of the affordable TV world, the motion blur isn’t actually that bad. 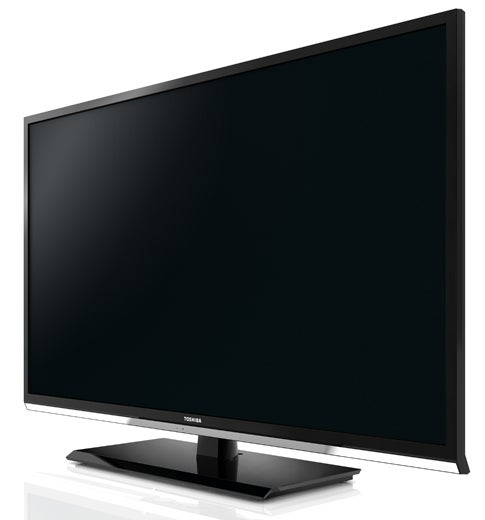 The 40RL953 also fares markedly better with HD sources coming in from both a connected Sky HD box and a Blu-ray player than it does those from its own tuner. These external HD images are for the most part purer and crisper at source than those you get from the Freeview HD tuner, a fact which seems to underline our previous thought that it’s the quality of the picture processing systems in the 40RL953 that let the side down rather than any innate inability of the panel to show HD well.

Here’s the good news
With the 40RL953‘s sharpness issue reduced by using high quality external HD sources, it’s easy to appreciate other strengths of its pictures too. For instance, while colours lack subtlety, they are quite vibrant and bold, enabling pictures to mostly avoid that rather lifeless sepia look you get with some very affordable TVs. The set’s basic colour tones are natural and believable too – it’s just a shame the TV isn’t subtle enough to produce more of them.

The Toshiba 40RL953 delivers a notably deeper black level response than your average sub-£500 40in TV, giving dark scenes an authentic and reasonably satisfying look as well as providing a good foundation and contrast for the screen’s decently (though not extravagantly) vibrant colour palette.

Dark scenes do reveal a couple more problems as well, though. First, shadow detail is in short supply once you’ve calibrated the screen’s backlight, brightness and contrast settings to produce the most convincing black colour. Second, you can sometimes see areas of backlight inconsistency, especially in the top and bottom right corners. These areas aren’t particularly glaring though, especially if you’re watching the set in bright conditions. 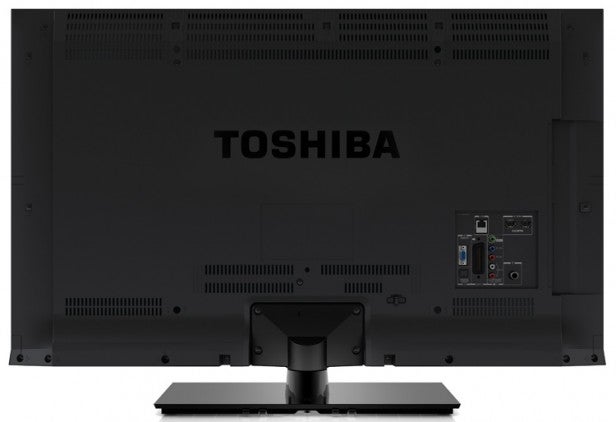 Wrapping up our assessment of the 40RL953’s picture performance with its input lag, we measured a pretty excellent 25ms on average using the TV’s Game mode. This makes the screen a perfectly decent option for gamers.

The Toshiba 40RL953’s sound is decent so long as you accept the fact that it’s only happy up to a medium volume level. Stay within that and the TV will give you reasonably clean dialogue, relatively harshness-free trebles, and a punchy tone. But if you push things too far, the speakers start to distort and the whole soundstage starts to become sibilant and crushed.

Verdict
In some ways and at certain times the Toshiba 40RL953 is another quality budget offering from Toshiba. It’s just a pity that for some reason it really doesn’t seem comfortable with the pictures from its own tuner.