As we look back at 2011, few TV brands have been as consistently busy as Toshiba. For not content with launching some impressive new premium-level TVs to go with enlarged mid and budget ranges, Toshiba also sneaked in a second burst of TV activity just in time for Christmas, introducing the TL868 series to offer active 3D at a lower price point, as well as a new 2D-only RL858 series we’re looking at here that’s designed to offer cash-strapped punters more features than they might expect and something different in design terms.

The RL858 series is represented today by what will likely be the most popular model of the range: the 32RL858B. This TV’s 32in size makes it a potential first and second-room option, especially as its appeal in both environments is greatly enhanced by the impressive slenderness of both its bezel and its rear. 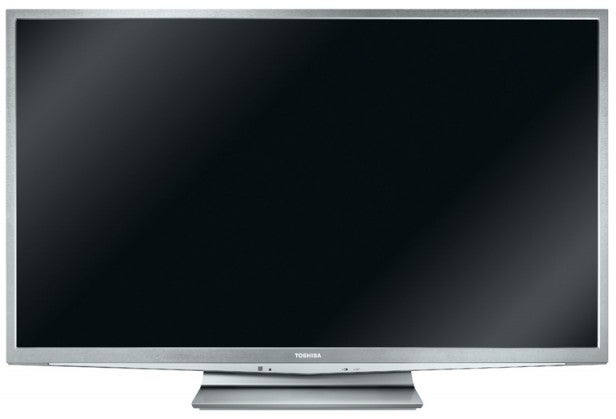 The bezel is barely a cm wide along three sides (and even the larger bottom edge is trimmer than most), while the rear only sticks out around 30mm without the stand attached.

Also immediately catching your eye about the 32RL858B’s design is the fact that it’s clad in silver rather than the usual black. It has to be said that the glossless silver frame round the screen looks and feels a touch plasticky. But this is only to be expected, really, when you’re talking about a fairly feature-rich 32in TV that costs less than £400. And it doesn’t stop the 32RL858B from achieving its key goal of looking distinctive.

The fact that the 32RL858 ships already attached to its stand – something that’s highly unusual these days – suggests that Toshiba doesn’t really imagine people wall-hanging the TV. This is underlined by the fact that the vast majority of the 32RL858B’s connections face straight out of the TV’s rear rather than supporting wall-friendly side entry.

These connections are more than respectable for the 32RL858’s money though. Three HDMIs get the ball rolling, but it’s the multimedia support that really stands out. For instance, there’s an Ethernet port that very impressively supports both streaming (albeit in rather limited fashion unless you have Windows 7) from a DLNA PC and access to Toshiba’s ‘Places’ online system. Oh, and the Ethernet is also there as mandatory support for a built-in Freeview HD tuner that counts as an excellent finding for the sub-£400 32in market.

The set also sports a USB input through which you can play photo, sound or music files, including DivX HD. Or you can use the USB for adding one of Toshiba’s WLM-20U2 wi-fi adaptors.

We’ve covered Toshiba’s Places online system recently during our review of the Toshiba 46TL868, so we don’t need to go deeply into it again here. Suffice it to say that it’s a beautifully presented system that shows some intriguing early efforts at personalising the online TV experience, but is also short of content compared with most rival systems.

It’s better now that Toshiba has added AceTrax and Facebook, which join other highlights of the BBC iPlayer, YouTube and Box Office 365. But it’s still off the content pace set by the likes of Samsung, LG, Sony and, latterly, Panasonic. Mind you, it’s worth remembering that we are talking here about a
sub-£400 32in TV, so arguably getting any online services should be
classed as a bonus. 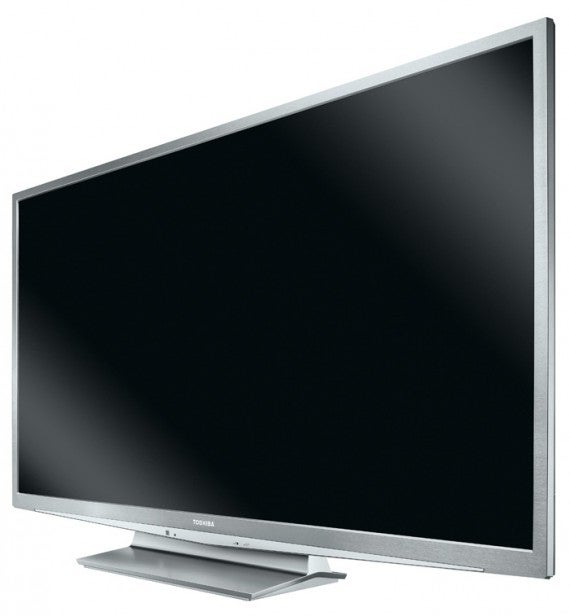 The 32RL858 continues to scoff at usual budget TV expectations by employing a full HD LCD panel illuminated by edge LED lighting, via which, it’s doubtless optimistically claimed, the TV can deliver a contrast ratio of 3,000,000:1!

The 32RL858’s onscreen menus continue to offer plenty of pleasant surprises for a budget TV, too. For instance, there’s a ‘ColourMaster’ colour management system that lets you adjust the hue, saturation and brightness of the red, green, blue, yellow, magenta and cyan colour components. You can also turn off the set’s active backlight control if you find its effects distracting, plus there are two types of noise reduction, and the set even supports 100Hz playback.

First impressions of the 32RL858‘s picture performance are remarkably positive, as they initially seem immune to the sorts of major problems that usually afflict cheap TVs – especially cheap TVs that boast as many features as the 32RL858B does.

Two things in particular grab your attention. First, the picture’s remarkably rich colours leap off the screen with much more dynamism than is usually the case, and second, HD pictures look much crisper and more detailed than is common with budget tellies.

Focusing in more detail on the colours first, their potency owes a considerable debt of gratitude to the set’s combination of a strong brightness output and surprisingly respectable black level response. Plus, of course, the set’s natural colour range and saturation levels are a clear cut above the budget norm, ensuring that as well as being punchy, the 32RL858’s colours are engagingly natural for most of the time. There’s even surprisingly good subtlety when it comes to showing colour blends, so that skin tones avoid the patchy, striped, or plasticky look you often get with cheap TVs.

The sharpness mentioned earlier, meanwhile, does a fine job of revealing how much better the 32RL858’s core picture processing engine is than that of the vast majority of similarly-priced rivals. It’s noticeable, too, how the clarity holds up well when there’s a lot of motion in the frame, with precious little of the motion ‘blur’ that troubles most LCD TVs to some extent – especially budget ones. Presumably a combination of the 100Hz engine and a fast native response time are to thank for this.

While the strengths already described are enough in themselves to make the 32RL858 a superior affordable set, though, its pictures are inevitably not perfect. For starters, while we were very impressed by its black level response in terms of how dark and ‘grey-free’ its black colours look, very dark scenes do reveal a few backlight consistency issues; as in, areas where the picture looks unnaturally brighter than it does elsewhere. 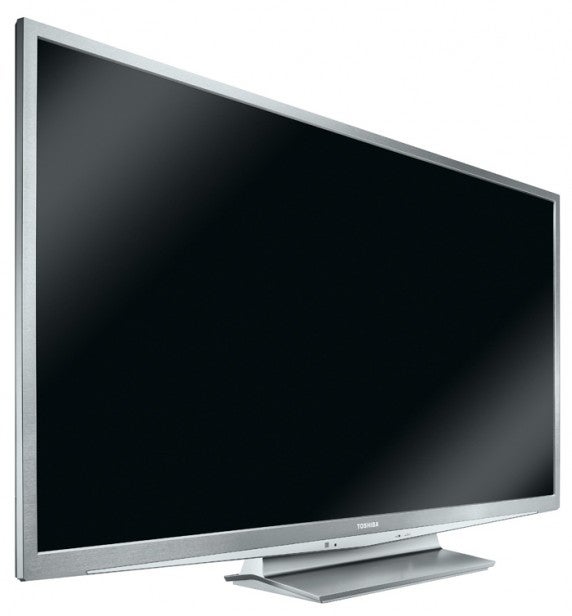 Crucially, though, if you make sure you keep the backlight to around its 60 setting at the highest, you will find that the overtness of the backlight consistency reduces exponentially.

Affordable, manageably sized screens like the 32RL858 obviously have potential as gaming monitors. With this in mind it was pleasing to find the set offering an average input lag of only around 28ms, fluctuating between up to 40ms and just 7ms.

Shifting from the 32RL858’s overall much better than expected picture quality to its audio, we were hardly startled to find its speakers struggling not to sound distorted and muddy when put under any serious duress by either a loud volume setting or a heavy bass line. Though to be fair, the mid-range is slightly more open and detailed under most viewing conditions than might reasonably have been expected given the puny dimensions of both the 32RL858’s bezel and price.

Although it’s not perfect, the Toshiba 32RL858 performs better and offers more features than you’ve any right to expect for its money – especially if you’re able to feed it a fairly HD-rich diet.