As I set about unboxing and connecting up Toshiba’s 32AV555DB, I can’t decide whether to feel excited or disappointed. For while, on the one hand, its £335.55 price is eye-bulgingly low for a new 32in LCD TV from an established brand, I also can’t help but feel a bit sad that the set isn’t one of Toshiba’s new Resolution+ models I’ve been gagging to get my hands on ever since they were first unveiled at August’s IFA show in Berlin.


Oh well. With a credit crunch Christmas looming, maybe it’s better to be focussing on the cheaper rather than the fancier things in home cinema life. So let’s just knuckle down to find out if the 32AV555DB is really as great value as it first appears, or whether its aggressive pricing comes with too many compromises for comfort.


Aesthetically it’s kind of funky – and I’m using the word funky in its ‘cool groove’ rather than ‘smelly’ interpretation. Its high-gloss lustre is given added lift by the curves around the edges of its bezel, resulting in a screen that looks from a sensible distance much less plasticky than it really is. 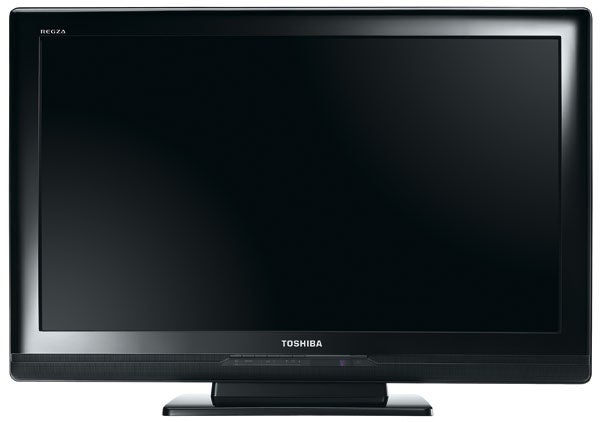 It’s rather ‘bare bones’ when it comes to connections, though – it only manages two HDMIs when we’re really looking for three as standard these days. It’s also worth noting that the 32AV555DB doesn’t carry a dedicated S-Video input or, worse, a D-SUB PC input. One of the HDMIs is configured to deliver PC compatibility, to be fair – but this compatibility is very limited and the TV isn’t guaranteed to work with every PC it gets hooked up to.


Happily the slight sense of disappointment raised by the 32AV555DB’s connections is soon forgotten once I start to get to grips with the surprisingly extensive features Toshiba has managed to retain on the 32AV555DB despite its lowly price. For starters, the set manages a version of Toshiba’s Active Vision LCD image processing system, when really we wouldn’t have been at all surprised to find no significant image processing at all considering how cheap it is.


As if that wasn’t enough, the TV’s spec list also shows that it carries Faroudja’s DCDi system. This deinterlaces the image and blends rough edges in diagonal lines, to reduce that jagged, noisy look that otherwise tends to afflict standard def pictures.

More interesting findings on the 32AV555DB include an unusually high – for the budget market – contrast ratio claim of 18000:1, achieved inevitably with the help of a dynamic backlight arrangement.


Plus there’s a Game mode that provides a more direct stream between a console and the screen than the usual video path; MPEG and standard noise reduction processing; and even a Colour Management system sufficiently sophisticated that it lets you individually adjust the hue, saturation, and brightness of the red, green, blue, yellow, magenta and cyan image elements.


All of this goes way beyond the call of budget TV duty – but we’re not complaining.

The only 32AV555DB specification I can imagine causing a few sharp intakes of breath among our readers is its native HD Ready resolution of 1,366 x 768 pixels. But seriously, you didn’t really expect to find a full HD pixel count on a £300-or-so 32in LCD TV, did you?


Turning at last to the 32AV555DB’s performance, it can quickly be summed up as being better than you probably thought possible. Its images are remarkably intense, for instance. Colours are exceptionally, fulsomely saturated and rich for such an affordable set, ensuring that animated fare like Ratatouille on Blu-ray looks as dazzling and engaging as we’d hope for on a 32in TV costing twice as much. 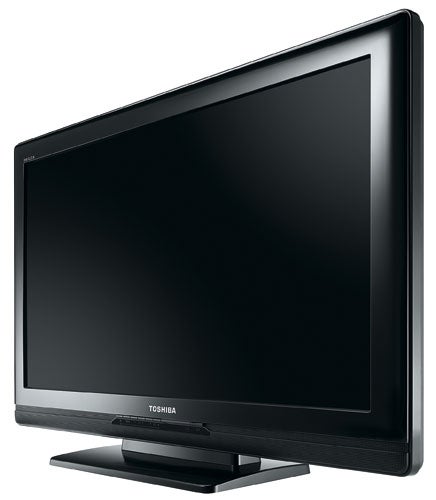 Crucially, though, the colour intensity I’m talking about isn’t only evident with animated fare. The blue skies above the beach in Hancock where Will Smith throws his beached whale look vivid yet believable, while the beach and all the onlookers remain naturally and evenly toned.


The sort of colour richness we’re talking about isn’t badly harmed, either, by the 32AV555DB’s black level response. Sure, there’s a degree of the familiar LCD greyness over dark movie scenes, and dark parts of the picture tend to look a bit hollow, as the set fails to bring out much shadow detail. But the general tone of black areas is far more authentic than is common at the budget end of the market, and the greyness is nowhere near as overbearing. It’s great to find, too, that the 32AV555DB’s contrast holds up better than usual when you’re watching it from down the side.


A further contribution to the intensity of the image we referred to earlier is the picture’s sharpness. I know the 32AV555DB isn’t a full HD LCD TV, but its scaling engine – driven by the Active Vision LCD processing – really does rescale the UK’s full HD sources to the screen’s 1,366 x 768 pixels exceptionally well, with precious little video noise or softness being introduced along the way. HD thus looks like HD – and that’s really all you can ask for from such a cheap and relatively small LCD TV.

A further contribution to the intensity of the image we referred to earlier is the picture’s sharpness. I know the 32AV555DB isn’t a full HD LCD TV, but its scaling engine – driven by the Active Vision LCD processing – really does rescale the UK’s full HD sources to the screen’s 1,366 x 768 pixels exceptionally well, with precious little video noise or softness being introduced along the way. HD thus looks like HD – and that’s really all you can ask for from such a cheap and relatively small LCD TV.


The 32AV555DB also surprised us with its standard definition performance. We’ve found some of Toshiba’s larger LCD TVs to struggle a little when trying to upscale standard definition to their HD Ready resolutions, but the 32AV555DB’s pictures look reasonably natural and noiseless – so long, at least, as the source is of a decent quality in the first place.


And so we come to the inevitable problems. Kicking off with some, at times pretty noticeable motion blur. Particularly – though not exclusively – evident while watching standard definition, this finds any really rapidly moving objects leaving a short-lived trail behind them, while also losing a little resolution on their journey. 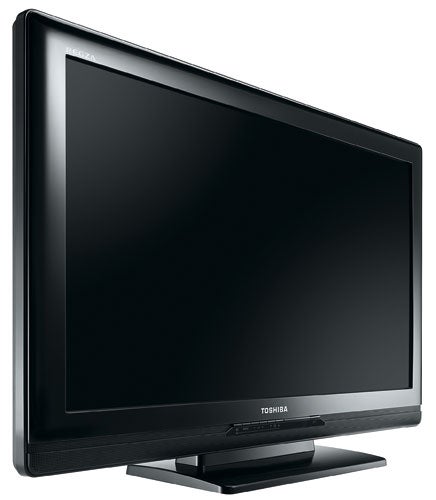 This is a common LCD problem, of course, and in fact the 32AV555DB arguably suffers less with it than most really cheap TVs. It’s certainly less pervasive than it is on, say, LG’s 32LG5000. But it’s definitely a reason to think about spending a bit more if you can.


Also, while the 32AV555DB’s standard def pictures are often pretty good, as we hinted a few paragraphs ago they can become quite excessively soft and smeary with poor quality sources such as the rough and ready standard-def National Geographic or Crime & Investigation channels of this world. The 32AV555DB’s picture isn’t the brightest around either – but I personally find this an easy pill to swallow given that it probably helps the TV deliver its superior colours and contrast.


Finally, HD sources can suffer with a little judder. But this really isn’t surprising at all on such a cheap TV, and it actually crops up sufficiently rarely to be barely worth mentioning in the context of such a cheap TV.


As with its pictures, the 32AV555DB’s sound is way better than I’d expected considering its price. The speakers have an uncanny knack of bringing out subtle background/ambient effects in a good sound mix, while voices also appear generally well-rounded and the soundstage is pushed far and wide without losing cohesion. Action scenes can sound a bit ‘lo-fi’, for want of a better description. But they still sound more open and clear than is customary on cheapo LCD TVs.


The 32AV555DB is not a perfect LCD TV by any means. But then at under £340, it was never going to be. What it most definitely is, however, is way, way better than you’ve any right to expect for so little money. In fact, it’s better than any other stupidly cheap 32in TV we’ve seen to date, and if that’s not enough to make it a potential Christmas saviour this year, we don’t know what is.