What is the Toshiba Cloud TV platform?

Toshiba Cloud TV is the name Toshiba gives to its smart TV system that’s available on select models in its range.Toshiba’s affable if rather basic Cloud TV system from 2013 showed the brand was moving in the right ‘Smart’ direction. But this year it’s taken a real leap forward thanks to the addition of the Media Guide Replay feature. 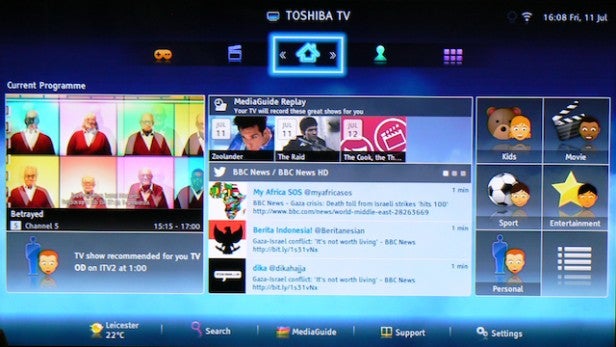 Although its appearance hasn’t changed radically from that of last year’s system, the latest Cloud TV interface is definitely prettier. Its resolution seems higher, which makes the layout look cleaner and leaves it able to handle more information more comfortably. Plus it just looks a bit more ‘current-gen’.

Before getting into what the 2014 Cloud TV system has to offer, we need to point out that Toshiba has introduced a split level Cloud TV approach this year, which finds cheaper TVs carrying what’s pretty much last year’s engine and features, while high-end models from the 7453DB series up feature the new faster, more feature-rich system.

Cloud TV’s main interface is made up of five separate hub screens accessed via a horizontal row of icons along the top of the screen. The most interesting ‘hub’ is the Home screen. This features a window on the left showing a reduced version of the broadcast programme that was playing when you hit the Smart button, with a small window beneath showing a cycling list of recommended programmes.

In the top third or so of a central column, meanwhile, is the up-front interface for the new MediaGuide Replay feature, while the rest of the central column features a Twitter window (complete, mercifully, with bad language filter) showing tweets concerned with the three most popular programmes currently being broadcast.

On the right are five boxes showing the cartoon faces of your ‘recommendation buddies’. Four of these characters represent a key genre – kids, movies, sport, and entertainment – and if you click on them you get a list of recommended content from that particular genre culled from the upcoming TV listings. 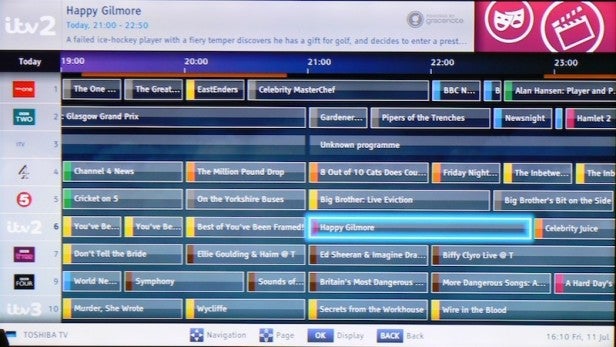 The Personal ‘character’, meanwhile, ought really to feature a photo of you. For it’s here that you can find recommendations based on an assessment of your viewing history. This wasn’t available on the 2013 Cloud TVs we tested, though it was scheduled to be added at some point. And although inevitably we didn’t get to spend months with the feature and thus give it time to build a really accurate profile of our viewing habits, even in the course of a few days it seemed to be reasonably perceptive in its analysis.

We can’t move away from the Home hub without going back to look more at the MediaGuide Replay window. For this new feature is actually at the heart of the latest Cloud TV engine.

The idea behind it is, essentially, to give you the option of replacing your normal TV schedule with a constantly updated selection of TV shows derived from your viewing history and automatically recorded to a connected USB hard drive.

The Home hub MediaGuide Replay window shows photo graphics and names of the four most imminent auto recordings the system is set to record. Click on the window and you go through to the full MGR screen where you can find a full list of ‘Next Recordings’ along the top, plus lists of recordings already made this week and last week running along in separate rows below. It’s an attractive and simple interface that really anyone should be able to use. 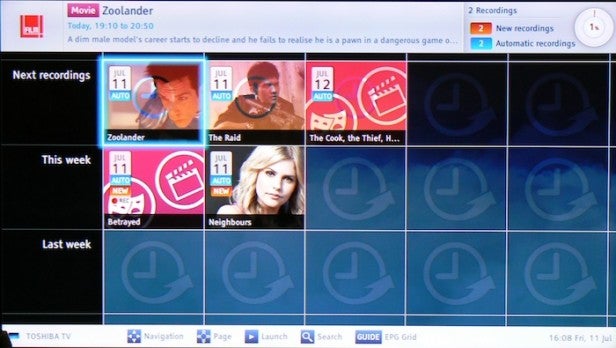 Given the feature’s potential to become your main source of viewing content it’s great, too, that you can directly access the MGR menu without having to go through the main Cloud Hub via the ‘profile’ button on the remote.

If you select one of the programmes listed on the MGR interface you get more details on the show, as well as options to find the programme in the TV’s EPG grid; keep the recording permanently (otherwise it will be auto deleted after a couple of weeks); or cancel the recording if it doesn’t appeal to you.

Impressively, if you opt to see more details on an MGR-listed show – or any show in the TV’s colourful EPG come to that – the TV doesn’t just give you a synopsis of the programme or film; it also uses Gracenote to show links to relevant cast and crew information. This can include full colour photos of many of the people highlighted, and lets you look through their back catalogue of work as well as access photo galleries where available. Select a film from an actor’s back catalogue, and you can then access cast and crew info on that movie or TV show too!

There is one significant shortcoming of the MGR system, though: there’s only one tuner. So Cloud TV can’t record one of its scheduled programmes while you continue to watch a different programme on another channel.

Cloud TV also, of course, lets you set your own manual recordings by selecting upcoming shows from the EPG. In fact, you can even set a ‘series link’ for a show so that the TV automatically records all episodes in a series. 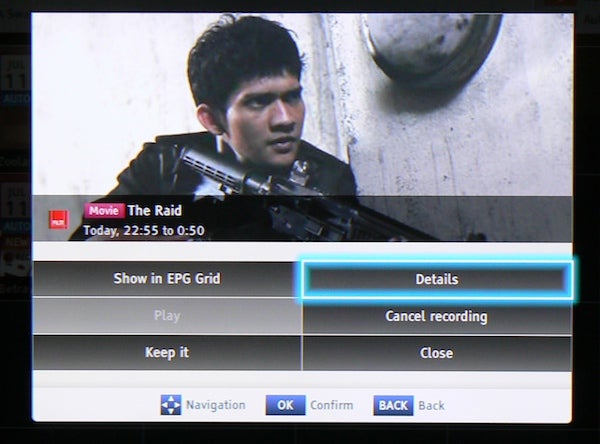 With its recommendation engine and auto recording functionality MGR draws obvious comparisons with the TiVo system currently offered by Virgin Media’s cable TV service. Except, of course, that Toshiba’s service is completely free, and fully integrated into your TV rather than requiring any monthly subscription payments or external set top boxes.

Moving left along the navigation icons at the top of the screen shifts you from the Home hub to the TV & Video hub, devoted to apps that deliver streamed movies and TV shows. The highlight apps directly linkable to from this hub at the time of writing are Netflix, BBC Sport, CineTrailer, Viewster, TG4, Vimeo, Phunkt (Men’s lifestyle channel), the BBC iPlayer, BlinkBox, BBC News and YouTube. Another link, meanwhile, takes you to further streaming apps for Euronews, iConcerts, France 24, KnowHow Movies, TV5 Monde, Innovation TV and Movie Fone. We’re also told Woomi is coming soon.

There’s a large window in the middle of the apps showing adverts for some of the video streaming platforms available. We guess Toshiba could argue this window helps remind you of what’s on offer. Though personally we’d rather get rid of the ad window and replace it with a few more direct app links. 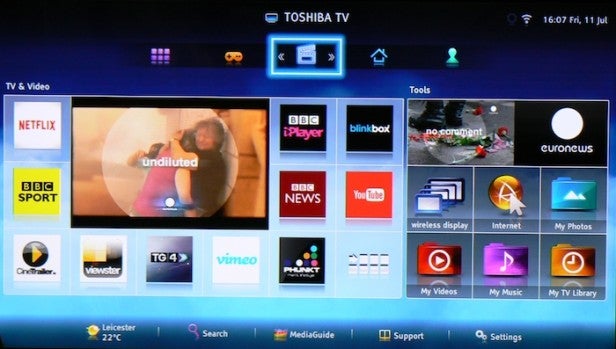 On the right third or so of the TV and Video menu (and most of the other Hubs too, actually) is a series of icons under the heading ‘Tools’. These enable connection with a WIDI-compatible PC; access to the internet via a built-in browser, playback of any photos, videos and music files you might have stored on USB drive or networked PC; and access to your TV recordings library.

Scrolling left again along the top nav bar brings you to a new Games hub. Unfortunately, at the time of writing Toshiba hasn’t got enough games content on its servers to fill all 12 available windows with game links! Two are just left blank. But to be fair two of the links provided – smartgames.tv and funspot – do link to services carrying far more than just one game each.

Left again on the nav bar from the Games hub gets you to the ‘Other categories’ section. This follows the same layout as the previous two hubs, with direct links on the left to – at the time of writing – BBC Sport, AccuWeather, iConcerts, Muzu.tv, NRJ, BBC News, Live Sport TV, Aupeo, Euronews, LifeShow (photo storage app), and the Event Wall app for ‘turning your TV into a tweet wall’ (shudder).

A link to further ‘other category’ apps brings you to TechCrunch, On, meteonews, Deezer, France 24 and ebay apps.

The last hub is represented by a head and shoulders icon, making you expect it to be a particularly personalised hub. But actually its purpose is rather vague. The right side continues the advert-plus-tools layout, the central section is just another large video advert with yet another static advert underneath, while the left third carries a selection of links to ‘Featured Apps’ which at the time of writing showed Netflix, YouTube, BBC iPlayer, Blinkbox, BBC Sport, BBC News, NRJ, and muzu.tv.

Given the apparently personal nature of this menu it’s a pity that a) the apps highlighted don’t seem to have anything to do with your own usage patterns, and b) there’s no facility for manually choosing which apps are highlighted in this hub. Panasonic, LG and Sony all let you set up your own personalised app priority lists and layouts, and not being able to do something similar on the latest Cloud TV platform feels like a major missing link in Toshiba’s obvious desire to personalise the smart experience.

The last Cloud TV feature to mention is the appearance along the bottom of all the hubs of a series of further links: a location-based weather update, a search tool to help you find desired content, a help facility, a settings box for changing online and account details, and finally a MediaGuide button that shows you what you’re watching now and the next programme scheduled to be recorded by MGR.

As with most smart TVs these days, the latest Cloud TV system can be used in conjunction with a Toshiba remote control app for your Android or Apple tablet or phone – though the functionality available via this app is rather limited versus what you get with the latest TV apps from Sony, Panasonic and Samsung. In fact, the current app feels like it hasn’t been updated from last year to accommodate this year’s new smart features.

Used as the main TV for the review period
Tested for more than a week
Tested using industry calibrated tools, discs and with real world use
Tested with broadcast content (HD/SD), video streams and demo discs
Next
Setup, Performance and Conclusions Review