There's no denying that the bladeless Tors+Olsson Air Pod Fan is one good looking unit, bringing space-age design to your desktop. Up close, the fan can deliver a constant stream of powerful air, although this dissipates quickly over distance, making the Air Pod better for personal cooling rather than tackling an entire room. It's a little noisy, but if you want a smart fan for personal cooling then the competitive price may prove temptation enough.

Tors+Olsson is keen to show that Dyson doesn’t have the monopoly on bladeless fans. With a head-turning design and a raft of features including powered horizontal and vertical oscillation, the Tors+Olsson Air Pod (made by Benross) certainly looks like something special. And, for personal cooling, the fan largely gets things right, but it’s quite noisy.

Tors+Olsson Air Pod Fan – What you need to know

Black to the future – but is the Tors+Olsson Air Pod performance up to its good looks?

For those of a certain age, the Air Pod is entertainingly reminiscent of Buck Rogers’ robotic sidekick, Twiki. Its futuristic design mounts a football-sized pod in such a way that it can rotate side to side or up and down. Below it is a base with touch-sensitive buttons and a cool blue display, while blue LEDs on the pod confirm which of six power levels are selected. 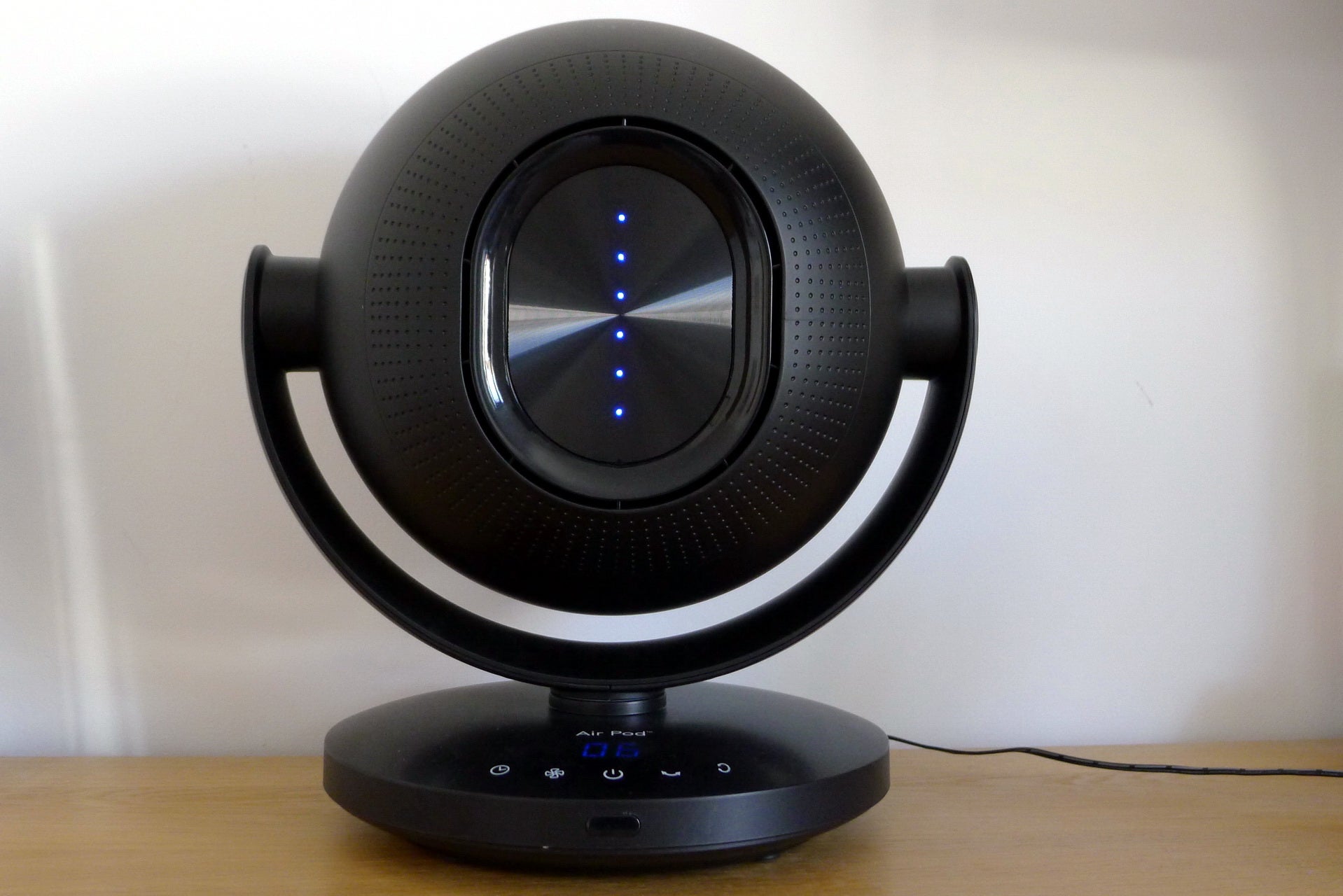 If you don’t want to walk over to the fan to control it, you can use the bundled remote instead. This lets you set the oscillation mode, switch on the night mode to dim the display and LEDs, turn on the timer (up to eight hours) and adjust the fan speed. 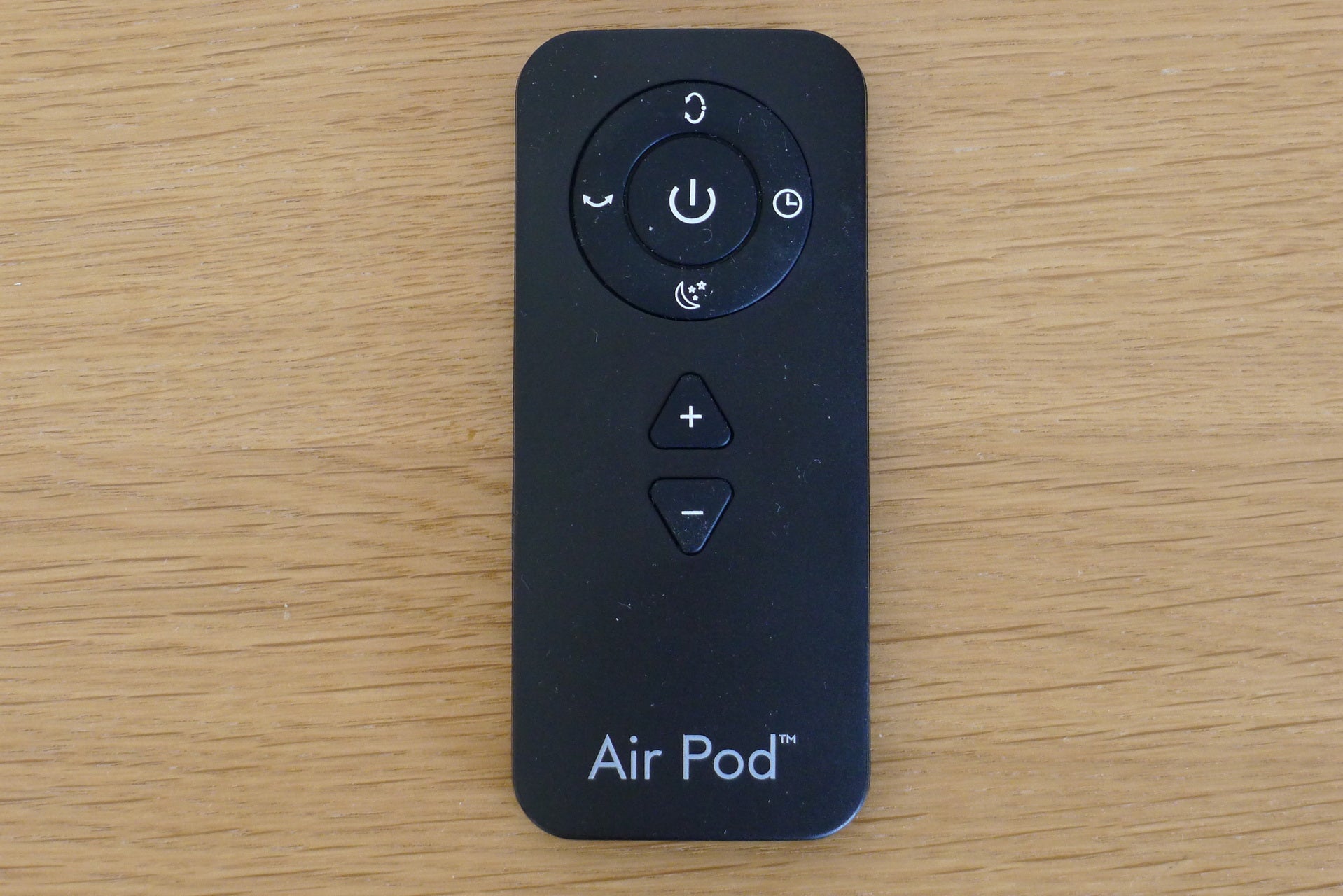 Look closer at the pod and you’ll find yourself wondering how it works. Unlike Dyson’s “empty” bladeless fans, there’s no central void here – you have to get up close to see the narrow, oval outlet where fast-moving air actually emerges. While it has a distinctive design, it misses out on the empty channel that’s a key part of Dyson’s air multiplier approach: without it, the fan can’t draw through and accelerate larger volumes of air.

From the outset, it’s clear this isn’t an especially quiet fan. It beeps at every command and defaults to the third of its six speed levels, at which point the noise is already considerable. Turned down to the minimum it’s reasonably quiet, but faster speeds are loud.

The Tors+Olsson Air Pod produces a focused breeze, but quickly runs out of puff

Up close, there’s no doubting the Air Pod’s ability to stir up a breeze. At 15cm we measured wind speeds of 1.5m/s on the lowest setting, and a stirring 3.5m/s on the highest. However, the design appears to accelerate a narrowly focused column of air, rather than moving a large volume. Just 1 metre away, wind speed from the most powerful setting had fallen to just 1.5m/s. On the lowest setting it was less than the 0.8m/s threshold of our anemometer. At 2 metres the breeze was too weak to measure, even with the fan up to full.

As such, this is definitely a fan designed for personal use, sat on a desk next to you providing personal cooling in much the same way as the Dyson Pure Cool Me or the Evapolar Personal Air Cooler. With air speed tailing off at distance, the Tors+Olsson Air Pod isn’t so good for cooling an entire room.

Measured 1 metre from the front, noise levels were lower than we were expecting, coming up at just 45.3dB on full power, and an exceptionally quiet 23.5dB at the lowest setting. Unusually, however, the readings were barely different when taken at a right-angle, which suggests that sound is largely comes from the fan mechanism inside, rather than being generated by high-speed air. At its lowest setting, the fan consumed just 3 watts, rising to 17W on full power.

Why buy the Tors+Olsson Air Pod?

There’s lots to like about this fan, from the way it looks, through to useful features including powered vertical and horizontal oscillation. Ultimately, though, it’s noisy. If you’re looking for a fan that you can use just for yourself – say, sitting at a desk – then the Tors+Olsson Air Pod is well priced, but you’d be better with one of our other models in our best fans guide if you want more powerful cooling at range.