If there’s one thing that Windows mobile devices aren’t short of, it’s web browsers. In part, you could put this down to the failings of Microsoft’s own Internet Explorer browser which has proved to be a bit of a flop with users thanks to its unwieldy interface. Microsoft is set to make some major updates to IE in Windows Mobile 6.5, but until it arrives many people are quite happily using other browsers such as Skyfire, Netfront and especially Opera Mobile; the mobile browser that has pretty much become the standard against which all others have to be judged. 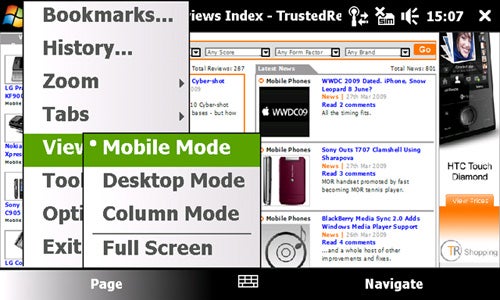 Iris Browser from Torch Mobile is looking to join in the party. The first non-beta version of Iris Browser was quite sluggish, but we thought it was time to take a closer look at it now that the developers have released a new version which they claim is 25 per cent faster. What makes Iris Browser particularly interesting is that it’s based on Webkit; the same rendering engine that Google uses for Chrome and Apple uses for its Safari browsers, including the browser built-in to the iPhone and iPod Touch. As such, it should not just do a decent job of rendering normal web pages, but also those that have been optimised for the iPhone. 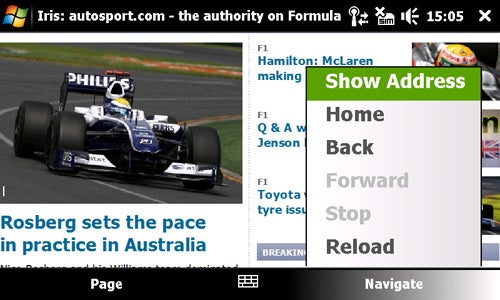 The browser is compatible with Windows Mobile 5 and 6.1 devices, but Torch Mobile recommends that you run it on a device with a 400MHz CPU and 128MB of RAM. Unlike the Skyfire browser that we reviewed back in December, Iris Browser supports devices with a range of screen sizes. We tried it on both the O2 XDA Zest and HTC Touch HD and both worked without any major problems. This isn’t a surprise really as unlike Skyfire, Iris Browser renders pages directly on the device rather than relying on an intermediary server. In this regard it’s much more of a standard browser in the mould of Opera Mobile. The other benefit is that like Opera, Iris Browser supports the accelerometer in the Touch HD so when you tilt the screen it automatically reformats the display to the correct orientation.


Loading up the browser one of the first things you notice is that it lacks an icon menu bar like the one found in Opera Mobile 9.5. Instead, the controls are accessed via standard Windows Mobile text menus. However, although they’re not as slick looking, these menus do provide similar levels of control. For example the page back, forward and reload controls are accessible via the right hand Navigate menu, while all the other controls and settings are located under the Page menu on the left.

In terms of rendering speed it quickly becomes clear that although this update is a vast improvement on the previous version of the software, Iris Browser is still no match for Opera Mobile. For example, the BBC home page took 13.4 seconds to display using Opera and a massive 30.6 seconds using Iris; Opera loaded the eBay homepage in 8.7 seconds whereas Iris took 15.7 seconds; and Autosport.com displayed in Opera in 14.4 seconds, but took 25.6 seconds to appear in Iris. However, with TrustedReviews the two were a closer match with Opera, taking 13.5 seconds and Iris taking 13.9 seconds. Even so, these results show that Iris still has a long way to go before it matches Opera in terms of page load and rendering speeds. 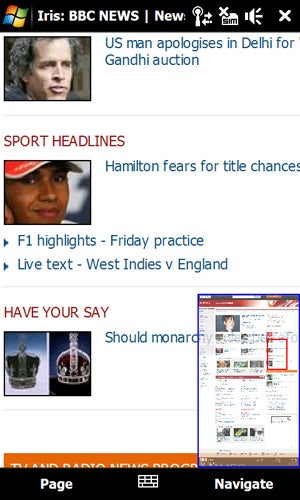 Of course, page load times are only one part of the browsing experience. Other factors such as zooming and page scrolling speeds are also important. One of the nice things about Iris Browser is that as you scroll around the screen it pops up a thumbnail view of the entire site in a box to show you exactly where you are in relation to other elements of the page. It also has an intelligent zoom feature so if you double tap on a column of text it will zoom in so that column fills the screen. Double tapping again zooms back out again. Zooming and scrolling was quite quick on the O2 Zest and pretty much on a par with Opera, but unfortunately on the Touch HD it was usually much more sluggish. 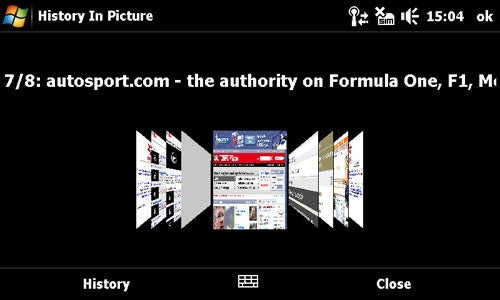 On the plus side, Torch Mobile has sprinkled some neat graphical touches throughout the interface. For example, when you tap on a link to a page, a small animation shows the link being pressed into the page before the browser starts to the load the new site. Similarly when you view the browser history, previously visited pages are shown as thumbnails that you can flick through in a similar way to the Coverflow graphics used for flicking through albums on the latest iPods. However, if you don’t like this graphical wizardry you can select to view the History log as a standard list instead. A similar Coverflow-style system is used for switching between open tabs (you can have up to four pages open in tabs at any one time).

Torch Mobile makes a big deal of Iris Browser’s customisable user interface on its website, but this turns out to be a bit less exciting than you would expect. The customisation options seem to relate to keyboard shortcuts rather than being able to move around buttons or functions on the browser’s main display. 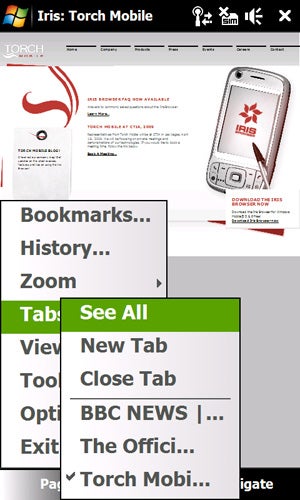 However, if you are using a device with a keyboard then the browser does allow you to map any function to any keyboard shortcut you like. This is done from a clever interface where the command is listed in a window at the top of the screen while keys are shown at the bottom along with tick boxes to set up Alt, Ctrl and Shift combinations. It’s all very quick and easy to use. Lots of keyboard shortcuts are already set up by default. For example, to zoom in you tap X; to zoom out you hold shift and tap X; to see an overview of open tabs you press 0; and to bookmark a page you hit Ctrl+D. 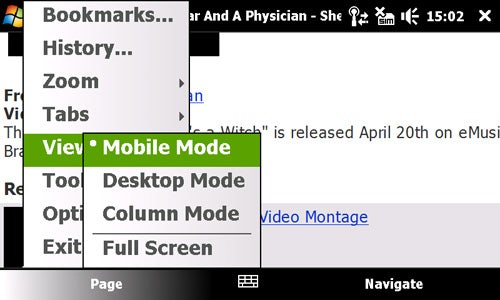 The main problem with the browser at the moment is that it’s still a tad unstable and seems to be very demanding on your device’s resources. You need a lot of memory available to run it effectively without it regularly complaining that it hasn’t got enough. And while it was reasonably fast on the XDA Zest, it felt very sluggish to use on the Touch HD. For example, scrolling around a page sometimes involved long waits for the browser to fill in gaps in the graphics.


Overall, we really quite like Iris Browser. Pages look excellent thanks to its top-notch rendering quality and the auto-zoom mode works really well. However, the software still feels quite buggy and in our experience can be quite slow to use on some devices. At present we’d describe it as showing lots of promise rather than being a browser that’s ready for prime time. Our advice for now is to stick with Opera 9.5, but keep an eye on Iris as it may have a lot to offer in the future.