We recently hailed the superb Humax PVR9200T as ‘the king of PVRs’ but its reign could soon be ended by a new challenger to the throne from Topfield, which comes equipped with a feature list that makes the Humax look positively archaic. It’s the successor to the highly impressive TF5800PVR, which was launched back in 2005 to rave reviews and is still available, but Topfield has made several tweaks to its design that make it more relevant to today’s market.


The first and most important feature to have been added is an HDMI output, which is still extremely rare among hard-disk PVRs – the only other model that springs to mind is the Evesham iPlayer. That means you can watch Freeview broadcasts in 720p or 1080i, which should have significant picture quality benefits when viewed on a hi-def ready display. However, it doesn’t mean that the unit will be able to handle hi-def Freeview broadcasts when they begin.

The TF5810PVRt also features Freeview Playback, which enables you to perform a variety of recording and timeshifting tricks, offering a level of flexibility that stops this machine feeling like a second-rate Sky+. It’s worth pointing out that the latest TF5800PVRs also ship with Freeview Playback and older ones can be updated using over-the-air upgrades, but the TF5810PVRt is compatible out of the box.


On board is a 500GB hard-disk – a great deal larger than the 160GB capacity offered by the TF5800PVR and the Humax PVR-9200T – which provides up to 250 hours of recording time (depending on the bitrate of the programmes you record). It also comes with two digital tuners so you can record one channel while watching another or record two channels while watching a third.


The eight-day electronic programme guide enables you to browse the Freeview channel line-up and set timer recordings by pressing just one button, and the unit will record an entire series automatically by selecting the ‘series recording’ option. If two scheduled recordings clash, then the unit recommends alternative broadcast times, plus it keeps up to date with schedule changes and adjusts the timings accordingly. And thanks to the buffer memory you can pause and rewind live TV, even when recording another channel.


Elsewhere you’ll find an editing mode for deleting unwanted sections from a recording. The process of doing this is a tad round the houses and it leaves a noisy edit point, but it’s a handy feature that you won’t find on many rivals. There’s a selection of games embedded in the unit’s memory and a picture-in-picture mode. It also supports MHEG5 digital text and interactive services, while the two Common Interface slots situated under a flap on the front panel lets you access pay TV channels.

On the rear you’ll find a healthy array of connections, including the aforementioned HDMI socket and two SCARTs, which let you connect to a TV and external recorder simultaneously, or loop a signal through the unit (useful if your TV only has one SCART input). Only one of these offers RGB output so some cable swapping could be in order if you want to copy recordings on your DVD recorder.

S-video, composite, stereo audio and optical digital audio outputs are also included, and two sets of RF inputs serve the twin digital tuners. You need to loop the signal from one set of inputs to the other in order to get the full twin-tuner functionality. The lack of an RF modulator means that neither of the RF outputs carry digital TV, which could cause a problem if you want to pipe the signal round the home, or need to connect to a SCART-free TV.


But the most intriguing rear connection (apart from HDMI) is the USB 2.0 port. Using this you can transfer MP3 files from a PC to the hard-disk using downloadable PC software, and use the unit as a jukebox. You can also use the USB to transfer downloadable TAPs (Topfield Applications) to the hard-disk, which make changes to the unit’s software, altering the menu design or the way features work, for instance. One of these TAPs allows the unit to handle JPEG picture files. 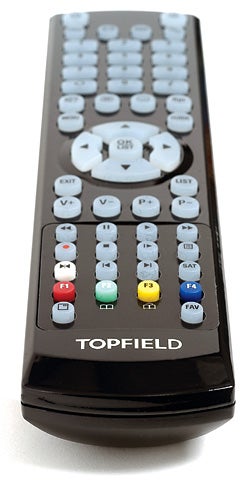 Looks-wise the TF5810PVRt is no oil painting but is still one of the better looking models on the market, spruced up by a huge silver disc that’s not just a cosmetic quirk – it also lets you change channels and alter the volume. The black finish is also fetching and the information panel is a vast improvement over the TF5800, which could only display a simple four-digit number – the 5810 displays the name of the channel or the recording being played, as well as a bar showing roughly how much hard-disk space has been used.


The onscreen design is superb, particularly the EPG that sensibly adopts the horizontal timeline overview favoured by Sky+, but you can switch to a vertical channel-specific list if you prefer. Surrounding the list is a programme synopsis and a small box playing live TV, plus a handy legend that tells you which button to press for each function. We’re also hugely impressed by the elaborate menu system which dazzled us with flashy text and graphics that make a refreshing change from the usual dour displays found on some other PVRs.

In action the unit is wonderfully slick; changing channels in less than a second and sailing through menu options without any pauses – all of which makes the user experience a pleasant one. Even when it’s busy recording two channels, you can access the EPG and carry out other functions without any detrimental effect on performance. On the downside, the remote is heavy on buttons, but among them are dedicated buttons to change the aspect ratio and HDMI resolution, plus a convenient Options button that brings up a mini menu of key functions.

If you hit record while watching a programme, the unit will record for a set amount of time (the default is two hours) and won’t stop at the end of the programme unless you tell it to, which is a slight niggle in an otherwise a magnificent operating system.


Freeview picture quality is right out of the top drawer. The HDMI output and HD upscaling prove their worth, subjectively giving the image an extra boost of sharpness and clarity that you don’t get from the RGB SCART. Colours are powerful too, and although there’s evidence of MPEG block noise (which is sadly part and parcel of Freeview broadcasts) it’s nothing more than a minor distraction and some channels look better than others. Also impressive is the stability of the tuners and the quality of recordings, which look identical to the original live broadcast.


Ladies and gentlemen, say hello to your new PVR champion. The Humax PVR-9200T has finally been ousted from power and replaced by a superior product that adds a greater hard-disk capacity and an HDMI output, as well as delivering a flawless performance and a magnificent user interface. But such brilliance comes at a price – at around £300, the TF5810PVRt is expensive, particularly when you compare it to the sub-£200 asking price for the Humax. But if money is no object (and if you don’t fancy subscribing to Sky) then this is the best Freeview PVR we’ve encountered.